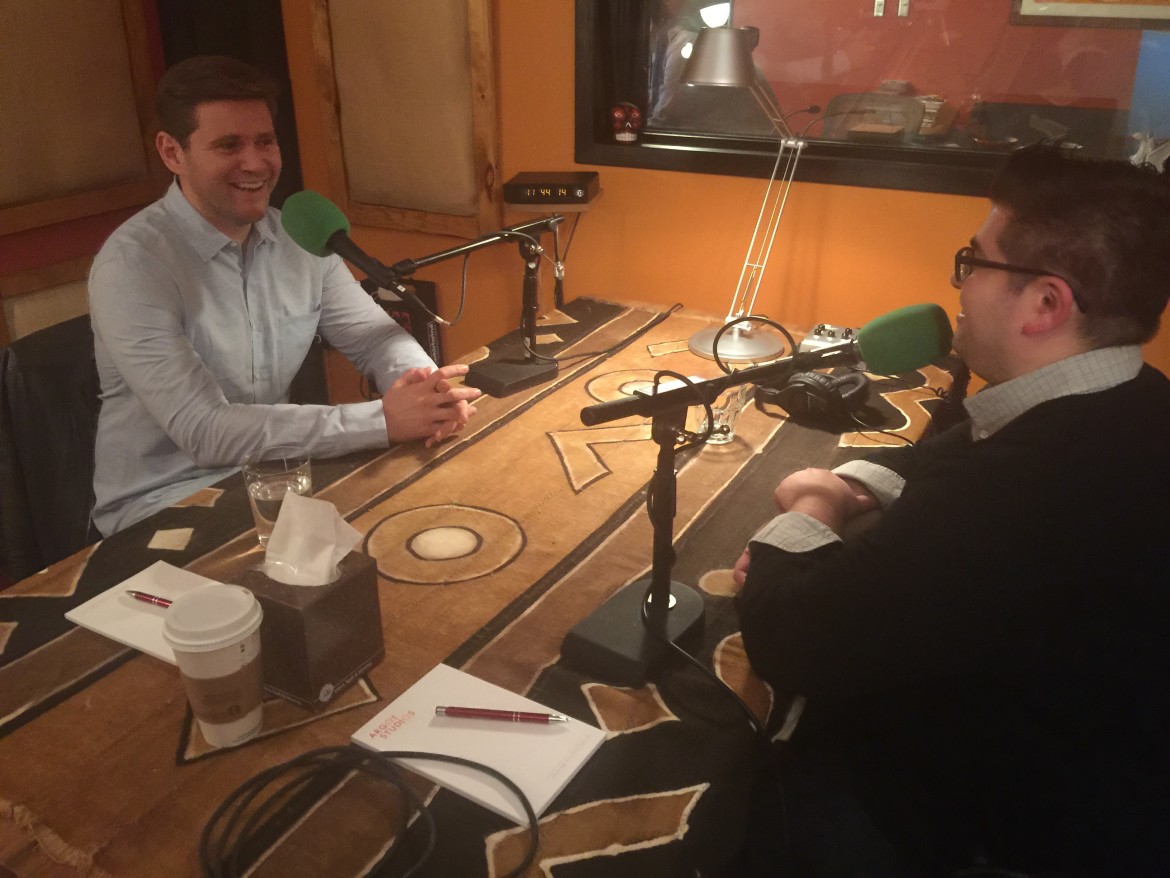 The success of WGBH’s companion podcasts for TV shows, including the recently released Masterpiece Studio and a longer-running Antiques Roadshow program, could be a sign of things to come as the Boston-based station continues to develop new podcasts.

The Masterpiece podcast, which launched in December, has been downloaded and streamed over 1 million times in less than two months, according to WGBH. It reached 12th on the iTunes charts in early January, and new episodes continue to appear regularly among the top 30.

“It truly has exceeded expectations,” said Susanne Simpson, Masterpiece senior series producer. “We’re really happy with the product we’ve been able to create. Our talent says things to Jace they haven’t said to anyone else, so we’re giving our audience something completely new and different.”

The idea for a podcast originated with John Bredar, WGBH’s v.p. for national programming. The Masterpiece team looked at how it could offer additional content to the show’s audience and decided the best approach would be to showcase the actors, writers and directors.

“We’re not in a position of creating original drama for radio yet,” Simpson said. “So what we could do was similar to short-form video. But you only get snippets of insight from the talent [in short-form video]. It’s not all that in-depth. What really makes the difference with the podcast is the sit-down interview.”

Listeners have heard Downton’s Michelle Dockery, who plays Lady Mary Crawley, discuss the moment she realized the show was a hit, when she went to a newsstand to grab milk and noticed her face on the front of three newspapers. And Sherlock co-creator Mark Gatiss joked about choosing Benedict Cumberbatch for the title role — “He gave us lots of money in a brown envelope.”

The timing of the podcast’s debut was key. With new seasons of Downton and Sherlock both airing in January, it was important for the launch to coincide with new episodes of “two of [Masterpiece’s] most powerful shows,” according to Simpson.

“As with any television series, trying to build an audience is a major goal,” Simpson said. “We’ve been extending social media, reaching out to as many platforms as we possibly can, developing Masterpiece content for other platforms, creating short-form videos on our site. The podcast is another extension of [that].”

WGBH has experimented with podcasts for other shows. In 2009, it introduced a Frontline: Extras podcast, which took listeners behind the scenes of the popular documentary series. That show lasted less than a year. The station has found greater success with Frontline: Audiocast, which offers the complete audio of recent select episodes of the TV program. The podcast was downloaded more than 2 million times between October 2014 and September 2015, the TV show’s broadcast season.

Nova also had two long-running podcasts and a vodcast, which consisted of short science videos. None is still in production.

The station is now working towards developing an overall podcasting strategy, said Bob Kempf, WGBH’s v.p. for digital services. “We recognize the potential for the [podcast] space,” he said. “But the fact you’re seeing podcasts related to TV programming is not part and parcel to our strategy.”

WGBH is looking into collaborative partnerships, distribution strategies, marketing and other elements of developing podcast infrastructure, Kempf said. Last year, the station partnered with the nonprofit GroundTruth Project to launch a podcast about international news, and it produces other podcasts independently of TV shows.

The show-based podcasts now in production could be seen as “bellwethers” for future programming, Kempf said.

“Our established brands give us a running start, but how to best serve audiences is still TBD,” Kempf said. “It will be different depending on the content area we’re exploring. I can’t say the Masterpiece formula is something we’ll repeat. It works for what it is, but depending on the brand, [another podcast] could be very different.”

Not all of WGBH’s podcasts started out as polished as Masterpiece Studio.

Antiques Roadshow producer Adam Monahan was listening to podcasts and came up with the idea for a Roadshow podcast in late 2012. He was listening to the podcast for How I Met Your Mother, which gave listeners a behind-the-scenes look at the popular CBS sitcom, and decided podcasts were “a space we should be in.”

His initial vision was to interview Roadshow appraisers who could share interesting stories about how they got into the appraisal business.

Monahan’s bosses at Antiques Roadshow had considered a Roadshow radio show, he said, but ultimately scrapped the plan because of the costs associated with studio recording.

“They were a little hesitant [about the podcast],” Monahan said. “They really weren’t podcast consumers. They thought of it as an extension of radio. I knew from my own experience, podcasts come in a wide range, and I could do a down-and-dirty one in my office.”

Modeling his show on the popular sports-themed Bill Simmons Podcast, in which Simmons often interviews people from the road with little in the way of equipment, Monahan put together five episodes over the course of 2013.

“Once [my bosses] listened, they realized what I was getting at, and it was compelling,” Monahan said.

The show, available on SoundCloud and iTunes, premiered in December 2013, and Monahan produced eight more episodes in 2014. Roadshow began marketing for the podcast in 2014, using its weekly AR Extras email newsletter, social media and its website. But by the end of the year, it had only 4,000 total streams and downloads.

The increased marketing began to pay off in 2015, however, coinciding with a shift in focus from appraisers to antique events in the news.

In an episode from October characteristic of the new format, Monahan talked with two Roadshow appraisers to evaluate an alleged photo of Billy the Kid. The photo, bought for $2 and valued at up to $5 million, was the subject of a National Geographic special. The appraisers weighed the evidence that the photo was genuinely of Billy the Kid.

“Antiques are in the news all the time,” Monahan said. “When stuff happens in the news, it’s beneficial to our audience to get what Antiques Roadshow thinks [about it] right away.”

Monahan, whose background is in TV production, admitted it took time to learn the ins and outs of audio recording, even calling some of the early episodes “a little embarrassing” to listen to now. Monahan’s first episodes consisted of Skype or phone conversations with appraisers, recorded using Monahan’s own $80 microphone.

But the experimentation helped get the show to its current form, and Monahan believes it offers value.

“I started out doing the stuff I could do in my free time,” Monahan said. “I’d record it and take my time editing it. With the new direction, it’s more like Antiques Roadshow news. I get the story, record it, edit it and pump it out in a quick turnaround.”

The numbers have also improved dramatically from year one. New episodes can get thousands of listens in a day, and some, including the Billy the Kid episode, have been streamed and downloaded more than 5,000 times.

The future of WGBH podcasts

Monahan, who advised the Masterpiece Studio team based on his experience, believes other WGBH TV programs could develop podcasts.

“I’ve thought of a million ideas for American Experience,” Monahan said. “They have so much in their vault, there’s just untapped potential. With podcast audiences growing, everyone should be tapping into it.”

As podcasts continue to evolve, Kempf said that any conversation about podcasts would likely be different even just a few months from now. So WGBH’s strategy will depend more on this evolution than on what the station has done before.

“We’re looking at fresh opportunities,” Kempf said. “Maybe we bring something [like Nova] back, but we’re in the stage where we’re studying what others are doing in the space.”

In developing a stationwide podcast strategy, Kempf said WGBH will also consider how TV show brands differ. Each podcast will have different objectives, he said.

“In terms of supporting the new season of Masterpiece and creating buzz for the program, the [Masterpiece Studio] podcast absolutely accomplished that,” Kempf said. “But ‘show first’ is only one way of looking at it. We’re trying to take a step back from that further and ask, what is the value of the brand, and how do we bring that to life in a podcast?”

That’s a goal Kempf thinks others in the system should strive for.

“If a show has done well in the TV space, ask yourself, as we have, is there the potential to realize what that show is about, or can be, in a different channel?” Kempf said. “Going into a studio and reading what you did on TV is probably not the best way to go.”