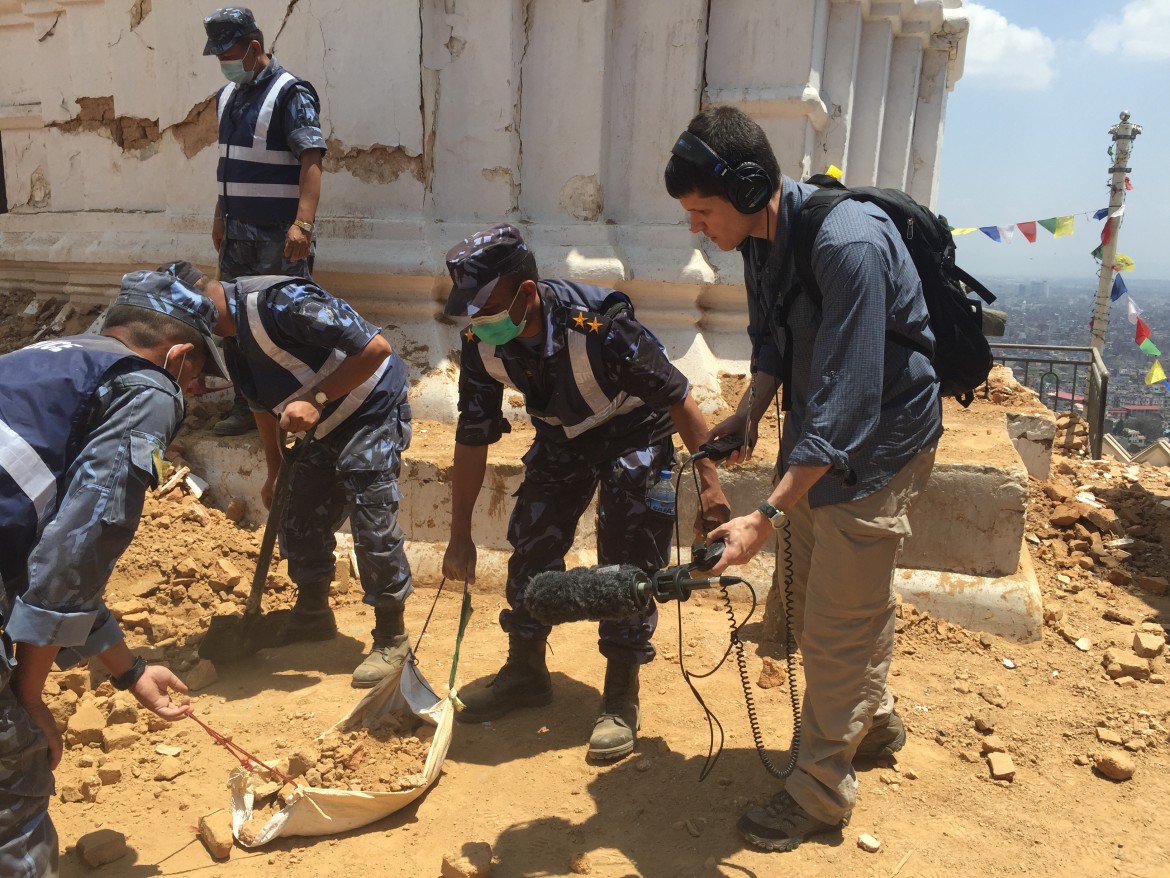 Lewis in Nepal, after the 2015 earthquake, recording the sounds of clean-up at Monkey Temple in Kathmandu. Photo: Kirk Siegler/NPR.

Lewis records the sounds of cleanup at Monkey Temple in Kathmandu after the 2015 earthquake in Nepal. (Photo: Kirk Siegler/NPR)

Russell Lewis lives in Alabama but keeps anti-malaria medication in his desk at all times.

NPR’s Southern Bureau Chief isn’t stocking up in case of a comeback of the disease in the South. The safeguard is just one of the many ways Lewis has prepared himself to go anywhere in the world at a moment’s notice. In addition to leading NPR’s coverage for the southern U.S., Lewis has become the go-to coordinator for NPR during large-scale disasters in the U.S. and abroad.

So when terrorists attacked Paris last year, Lewis was on a plane to Paris within four hours of the news breaking.

Lewis is part of an NPR support team known as the Go Team, which is on call 24 hours a day in case of a major disaster. At the first sign of a disaster, the team begins finding accommodations for NPR staffers and setting them up with basic supplies such as food, water and fuel. In the days after a disaster, Lewis and the team cycles reporters through to avoid burnout, pitching in to help with reporting and production as needed. The network’s news team created the unit during the 2010 earthquake in Haiti.

Edith Chapin, executive editor at NPR News, said Lewis is “an army of one. We deploy him as a circus master, jack-of-all-trades and leader of many when big stories break in both the U.S. and overseas. It is an unofficial role, but one he excels in.”

Supporting journalists on the scenes of major tragedies has taught Lewis about the toll covering such events can have on reporters and support staff. Now, in addition to being ready to catch a plane with just a few hours’ notice — even when on vacation — Lewis has used the knowledge he’s gained to lead workshops and training sessions with NPR member stations. That includes guidance on how reporters can protect their psychological well-being amid disasters.

Current spoke with Lewis about the challenges stations and journalists face when covering tragedies and tips for journalists covering difficult stories. This is an edited version of our conversation.

Current: What are some of the challenges that NPR and member stations face when they’re covering large-scale crises or tragedies in their own communities?

Russell Lewis: A tragedy in any community can be anything. A tragedy can be a house fire in which four people die. That can be very, very tragic. For a member station reporter who may not cover a lot of things like that, that can be very difficult thing to cover. So it’s not easy for journalists to cover death, to cover trauma.

I’m very involved with the Dart Center for Journalism and Trauma out of Columbia University in New York. Its mission is to work with journalists to help them understand how to cover those kinds of events both professionally but also personally. Knowing that some things are going to be very difficult to cover and it’s okay to take a break. It’s okay to check in with your staff to make sure how they’re doing and what they’re doing.

I think as we see more and more mass shootings in this country — and they can happen anywhere as we’ve seen, be it in a movie theater or at a women’s clinic or just wherever — reporters need to be ready at any time to cover something and to hop on it and be able to figure out what’s happening and why. And that can be a real challenge, especially for some of the smaller news departments that we see at some member stations.

Is self-care for journalists covering tragedies something you think is overlooked in the industry?

I think for many many years it was. Some people would view journalists as robots that are able to go cover something, that it doesn’t affect you, that you’re able to look at death and destruction and you report it and then you tell the story and then you go home. But I think we, we being professional journalists, realize that that’s not a healthy attitude. … I think that there’s a realization and expectation that your reporters are not robots, they’re human beings, and you have to treat them like humans and realize that it can be difficult and not easy to cover traumatic events.

“Self-care is a really important thing that we need to do, and we have to realize that it doesn’t just affect the front-line reporters, it can affect the people who are back in the newsroom.”

I was sent to Newtown, Connecticut, on the day of the shootings, and I checked in with one of my reporters the next day. He said, “I’m not doing well, I don’t think I can stay here a long time.” And I’m like, “OK.” For me, I realized this was such a difficult story to cover, because it involved the deaths of children, that we didn’t want to have our reporters be on the ground for more than a couple of days.

I ran it up the flagpole to my bosses and said we need to rotate people into and out of this story very quickly. Have them be on the ground for a day or two or three and then be done. Or it just would be too much. That’s what we ended up doing. And then we followed up in the weeks after that. We brought in some folks from the Dart Center into NPR, just to talk to reporters, to say “How are you doing? How are you handling? How are you coping?” It’s good to open up those dialogues.

Self-care is a really important thing that we need to do, and we have to realize that it doesn’t just affect the front-line reporters, it can affect the people who are back in the newsroom. These are the people who answer the telephones, and they’re listening on the other end of the phone as someone’s reporting something that’s happening. It can be the people writing the web stories. So it’s not just the front-line people who can be affected, but it’s really anybody who works for a journalism organization. There has to be an acknowledgement that it’s something we have to be careful of and something we need to be mindful of.

Does NPR have policies or guidelines for promoting self-care, or is it something you work on as it comes up? How does that work?

It’s something that’s part of our culture. It’s something that we talk about. I think you have editors, people like me, who are aware that when there’s a big story happening that you have to check in with your people and ask how they’re doing. … At NPR we actually have psychologists who are on-call to us 24 hours a day so that any reporter can pick up the phone and speak with another journalism professional just for a talk-through experience. It’s free. It’s part of our benefits package. And NPR never knows who it is who calls when they need to talk about that. That’s just one of the many things that I think good journalism organizations need to provide to their employees, knowing that sometimes you just need to talk to somebody and say “Hey, I’m having a tough time dealing with this story.”

For a member station that doesn’t have resources or journalists to switch in and out, what are some ways they can be more prepared for tragedies and more able to help their journalists with self-care?

Again, it’s part of the culture. Part of my job as the Southern Bureau Chief at NPR is that I actually visit a fair number of the stations across the South, doing training and talking to them about doing good journalism practices. And one of the things that I always talk about, as part of my training, is the challenges of covering difficult stories and making sure that managers and reporters understand that there is a breaking point and you have … to understand not to push things too far. It’s something that I think now, more than ever, people are aware that there are resources and there are people out there to help.

What do you do for self-care? What are your ways of dealing?

I like to take breaks when I can. And I also know that sometimes in the middle of a big story sometimes I’ll try to carve out a couple hours a day of downtime just to sort of take a break for myself. So that’s one thing I do. I try to be very very mindful of that. The other thing too is, I’ve spent so many years thinking about this that I just kind of go into automatic mode when something happens and I know where the breaking point is and not just sort of push that far.

Here’s a real-world example. So after Paris and Belgium, where I was on the ground a couple of weeks, it wasn’t too many days later, after I got back, that the shootings happened in San Bernardino, California. And I looked at that and I was still recovering from Paris and Belgium. I was still very, very tired and I didn’t raise my hand for that assignment. I didn’t say I’m available to go, normally I would have, but I just realized that I had come off a very difficult assignment and I just didn’t think I was able to pick up another difficult assignment that was equally as grueling, so I just didn’t raise my hand. And we had other people who could step in and do that. From a self-care standpoint, you also have to know what your limitations are as well.

You said you do some trainings about this kind of reporting. What are some other resources that might be available to NPR member stations?

I think any of the various professional journalism organizations are starting to get into this more and more because we see that there can be mass tragedy events and it doesn’t have to be something like a shooting. It can be a school-bus accident. It could be a fire, it could be any number of things. Tragedy can hit people in any number of different ways and can affect reporters in different ways.

There has to be a realization that you have to understand what one can do, what the limitations are, and what makes sense. I think the professional journalism organizations like RTDNA [Radio Television Digital News Association], PRNDI [Public Radio News Directors Inc.], they have had folks from the Dart Center and entities come to talk about things, about how you handle covering difficult things. We saw it in light of the shootings in Virginia during the TV live shot [last] year, the reporter and videographer who were killed by a disgruntled former worker. Tragedy can hit in different ways, and you just have to be able to work your way through it but realize it’s going not be easy. Those are the kinds of things that I think about.

Correction: An earlier version of this post misstated the role of Lewis with the Go Team. He is part of the team but is not tasked with leading it.