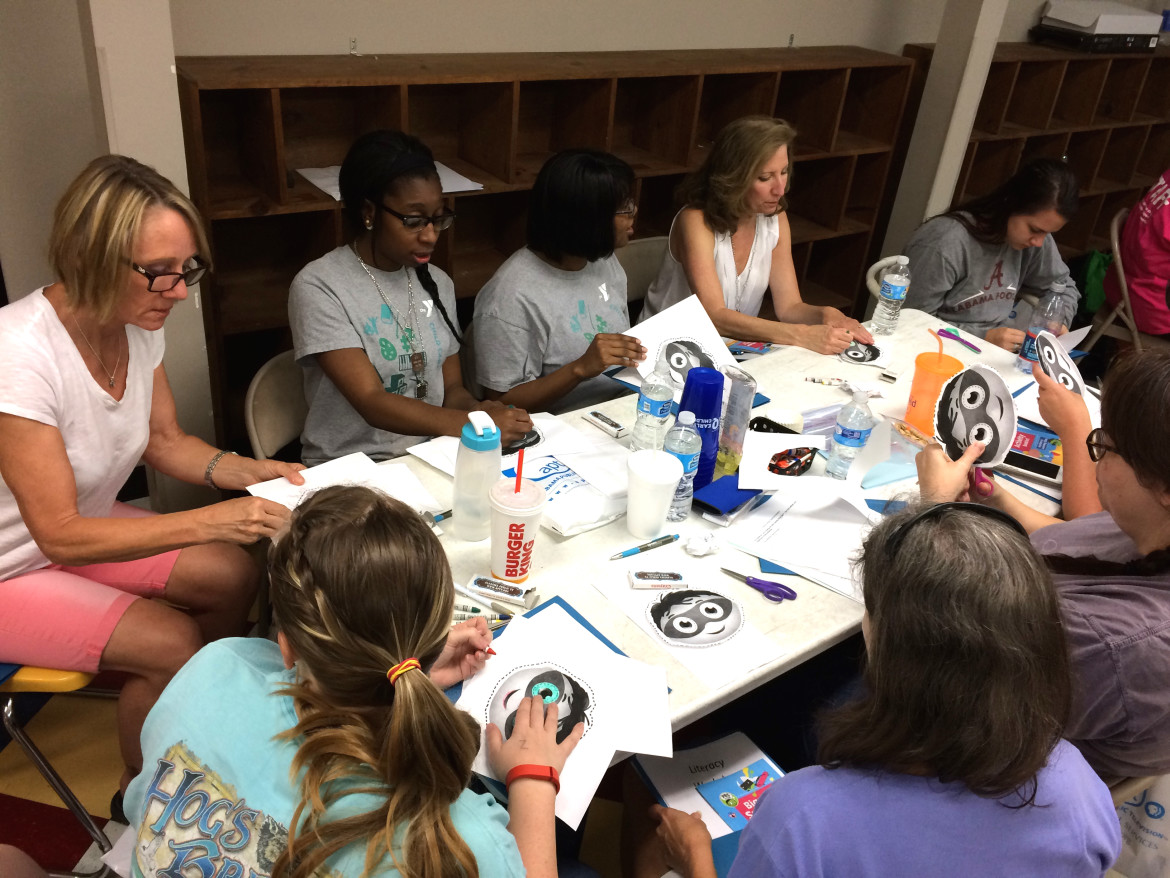 Participants in an Alabama Public Television workshop at the YMCA in Birmingham work on crafts during Media Literacy training. (Photo: APT)

Participants in an Alabama Public Television workshop at a Birmingham area YMCA work on crafts during Literacy with Media training. (Photo: APT)

To honor that work, CPB will present an American Graduate Champion Award to Stan Law, c.e.o. of the Birmingham YMCA, Monday at the Public Media Summit in Washington, D.C., sponsored by the Association of Public Television Stations.

The YMCA “is a natural fit with Alabama Public Television,” said APT CEO Roy Clem. “We both want to make sure that every child lives up to his or her fullest potential.”

The partnership between APT and the YMCA “is a wonderful illustration of how each organization amplifies the work of the other in service to their community — particularly those who are underserved,” said Tish King, CPB spokesperson.

APT and Law both have deep educational roots: In 1955, Alabama became the first state to launch an educational television network; Law’s parents and all four grandparents were educators.

When Law arrived at the Birmingham Y in 2013, he soon created an ad hoc education committee to determine how to connect more deeply with young people. That led him to Cindy Kirk, v.p. of education services at APT.

The station has a long history of educational outreach, Kirk said, including spearheading e-Learning for Educators starting in 2005. The $22 million federal education initiative paired state departments of education and public TV stations in 10 states. APT employs 11 full-timers and six part-timers focusing on the work.

Initially, APT sponsored two trainings for YMCA staffers at four locations: Music Works Wonders, which teaches the importance of music and how to make simple musical instruments; and Literacy with Media, which provides tips on practices such as using closed captioning to introduce new words. Both workshops also used PBS Kids videos and content from PBS LearningMedia, the online teaching resource.

Since then, the Early Childhood Education staff at APT has conducted 11 workshops for Birmingham-area YMCAs, said Tiffany Armstrong, the stations’ early childhood coordinator. APT staffers are working on scheduling more workshops on math and child development.

Law said that thanks to the collaboration with APT, “our staff is now armed to make a greater impact on kids.”

Law also saw the potential in APT’s interactive Electronic Field Trips, which combine videos and live segments around different topics: Shakespeare, a visit to George Washington’s Mount Vernon home, interviews with members of Congress. Many originate from APT’s small studio at the Folger Shakespeare Library on Capitol Hill. Kids and teachers can submit questions during the events and express opinions through polls.

The Electronic Field Trips so impressed Law that he purchased several 50-inch TVs for children at area YMCAs to participate during after-school hours or day camp.

The field trips, which premiered in 2011, have reached 2.9 million kids so far, Kirk said, not only in Alabama but also nationwide and internationally. A current series, Project C, marks important anniversaries of the civil rights movement in Alabama, including the Selma to Montgomery march. Coming up in March is a program on Thomas Jefferson’s Monticello, and a visit to the Dauphin Island Sea Lab off the coast of Mobile, a marine education and research center.

APT’s education work “aligns perfectly” with the YMCA’s mission of helping kids achieve their goals, Law said. “I’m really excited about more we can do together,” he said.

Clem added that he sees growth potential. “If we’re doing this across the Birmingham metro area, it could be scaled up across the state and beyond,” Clem said.