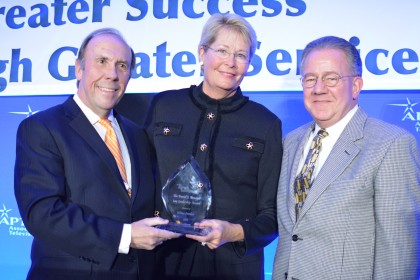 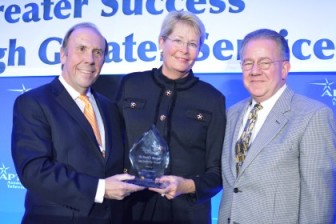 “Her heart and soul are rooted in education,” APTS CEO Patrick Butler said, presenting the award.

APTS also handed out a new award during the conference, the first-ever Public Service Award for Excellence in Education. The award was presented to Gail Porter Long, the recently retired chief education officer for Maryland Public Television.

“For nearly 40 years, Gail Porter Long has been an intrepid pioneer in the field of education, to the great benefit of Maryland Public Television and the students of Maryland,” Butler said.

APTS also presented its 2015 EDGE Award to Alan Popkin, director of television engineering and technical operations at KLCS-TV in Los Angeles. The award is given to those in public television who have “excelled in the use of technology, groundbreaking partnerships and other pioneering work to advance public television’s public service mission.”

Popkin received the award largely for his work on a channel-sharing pilot program between KLCS and commercial, bilingual KLJA-TV. The program aimed to test the technology and whether it may be usable by stations looking to sell spectrum in the upcoming FCC incentive auction.

Popkin has been director of television engineering and technical operations at KLCS since 2002. Prior to that, he was director of production for Time Warner Communications.

On Feb. 24, the last day of the summit, APTS presented its 2015 National Advocacy Award to Rob Dunlop, c.e.o. of KCTS 9 in Seattle, and Ed Ulman, g.m. of KBTC-TV in Tacoma, Wash.,for their efforts to further public television’s legislative goals.

Dunlop joined KCTS in September 2013 after 22 years on the commercial side of broadcasting at Fisher Communications in Seattle. Ulman was promoted to g.m. in February 2014. Prior to that, he was director of development at KBTC. Ulman is also dean of instruction for media production and digital media programs at KBTC, part of a technical college.

The Champion of Public Broadcasting Award honors political leaders and others who “safeguard the ability of local public television stations to provide education, public safety and civic engagement services to their communities.”

Bentley said he and other governors are increasingly understanding the return on investment that public broadcasting offers to their states. “A growing number of the nation’s governors recognize that public television offers high-quality, low-cost solutions to some policy challenges in education and public safety,” Bentley said.

Durbin, senior senator from Illinois, is a member of the Senate Appropriations Committee and the Labor–Health and Human Services–Education subcommittee. Butler thanked Durbin for his support in Congress to secure funding for CPB and PBS’s Ready to Learn program.