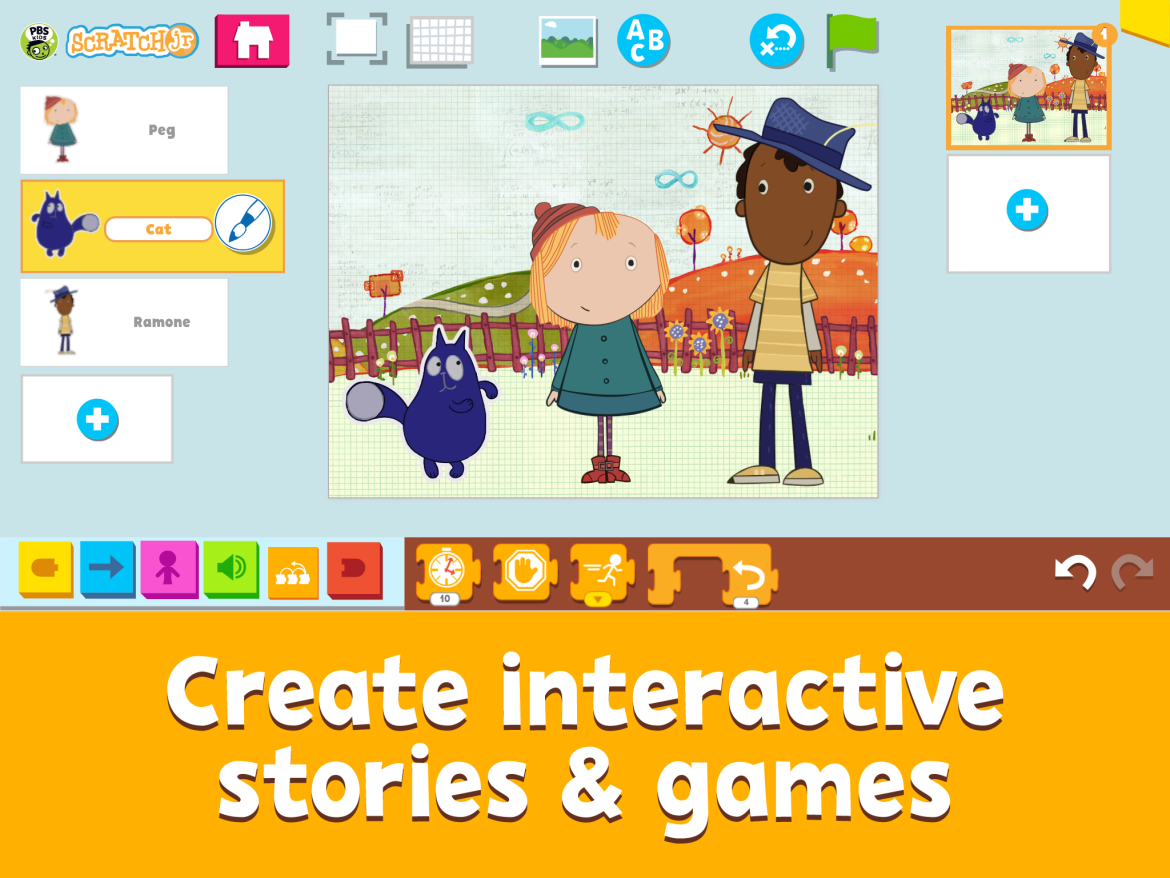 Kids can use the new PBS app to make stories with characters from Peg + Cat and other shows.

PBS member stations will soon be able to help kids make their favorite characters move and talk with the PBS Kids ScratchJr app, which teaches kids basic concepts of coding and storytelling.

Designed for children 5 to 8 years old, the game includes elements of Wild Kratts, WordGirl, Peg + Cat and Nature Cat. Kids can move blocks of code around on a iPad or Android tablet to make the characters move.

Tablets were chosen as the game’s platform because younger kids can more easily play on larger screens. “Because of the age range we’re looking at, the tablet is much more accessible,” said Sara DeWitt, vice president of PBS Kids Digital.

PBS aims to integrate ScratchJr into classrooms and after-school activities during the spring of 2016 through teacher training and expanded online educational materials following a pilot funded by Verizon, according to DeWitt.

The app launched Dec. 3 in conjunction with Hour of Code, a national initiative to demystify coding and computer science by exposing students to coding in clasrooms during Computer Science Education week, Dec. 7–13.

The app’s developers saw ScratchJr as an opportunity to help kids understand the many screens that they interact with and to realize that humans make what they see on screens, DeWitt said.

The project was funded by a previous cycle of the Department of Education Ready to Learn initiative grants. PBS keeps the budgets of individual projects confidential, according to a PBS spokesperson by email.

Ten pilot stations backed by Verizon will refine and expand free materials already online, including broadcasters in Phoenix, Pittsburgh and Las Vegas, said Justina Nixon-Saintil, director of education at the Verizon Foundation. Participating stations will be finalized in mid-January, according to PBS, and will already have the technology needed for the enrichment programs. (UPDATE: PBS has confirmed that participants will include Vegas PBS; KBTC in Tacoma, Wash.; and WHRO in Norfolk, Va. Others are yet to be determined.)

Verizon will fund PBS’s purchasing of technology for after-school events and weeklong camps during spring and summer breaks, Nixon-Saintil said, as well as initial teacher training and curriculum development. She would not disclose how much Verizon is spending on the project.

PBS member stations will run the programs, but Verizon may provide additional support staffers depending on final locations.

The Verizon Foundation and PBS have been in talks for several years about creating a coding app to promote critical thinking in lower grades, Nixon-Saintil said. The effort marks Verizon’s first time partnering with PBS to teach kids in kindergarten through third grade how to code.

DeWitt said coding is another kind of literacy for children. Kids often send PBS stories they write that mix characters from different shows, DeWitt said. “This takes that opportunity for creation and expression and layers coding on top of that,” she said.

Storytelling and self-expression are central to the application and PBS, she said. Along with reading and math, coding rounds out PBS’s curriculum offerings and furthers the science and media literacy goals of Ready To Learn, she said.

PBS developed the app in collaboration with MIT’s Media Lab and a Tufts University research group that studies how technology can help young people achieve their goals.

The ScratchJr app is based on Scratch, a programming language designed for 8- to 16-year-olds that helps kids and teens think systematically, creatively and logically, according to its website, where users can create games and animations.

Coding is a 21st-century skill that PBS sees an emerging demand for, but looking at the “whole child” for early education is still key, DeWitt said.

“We’re not trying to create a bunch of little computer scientists,” DeWitt said.