The local Grand Forks Herald reported that the cause of the 38-year-old’s death was “unclear.”

Filmmaker David Sutherland (The Farmer’s Wife) spent more than three years following the divorced single mother, then known as Robin Charboneau, who was struggling to raise two children on the Spirit Lake Reservation while coping with the long-term effects of sexual abuse she endured as a child.

At one point, on camera, she learned that her ex-husband had been similarly abusing their daughter.

The two-part film aired in April 2013 as a joint production of Frontline and Independent Lens. 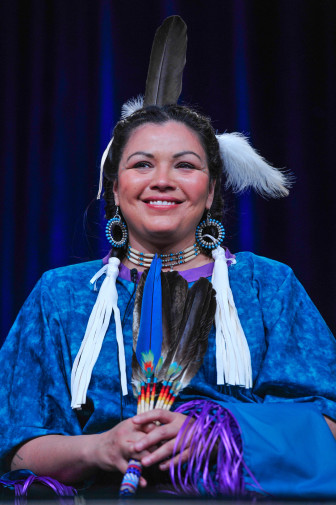 Poor Bear, an Oglala Sioux, told writers at the Television Critics Association Press Tour in January 2013 how the film changed her life.

When Sutherland first arrived for filming, she said, “he was talking to a little girl. “She didn’t have a voice. She had a spirit but it was gone. It was lost. She didn’t know who she was. She didn’t know what it was to be a woman. . . . And all of a sudden comes this crazy man who listened to me. . . . I found my voice. I found my spirit. He listened to a little girl when nobody else would listen. That’s what David did.”

The White Earth DOVE Program, a nonprofit fighting sexual and partner violence in White Earth, Minn., said in a Facebook post Monday that “Robin’s legacy and tireless efforts in (victim services) provided changes that will be everlasting. Robin provided her heart and soul where it was needed and never hesitated when she was called upon.”

Surviving are her two children, Darian and Anthony.

Visitation is scheduled for 5 p.m. Sunday at the Tekakwitha Center in St. Michael, N.D., with the funeral 10 a.m. Monday at St. Michael’s Catholic Church.