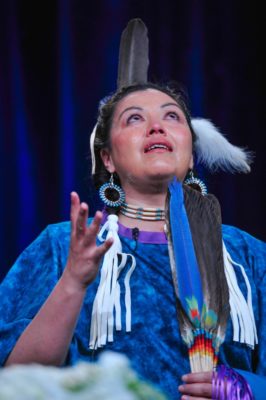 For Charboneau, the filmmaking process was transformational. “I found my voice. I found my spirit,” she said during an appearance at last month’s TCA Press Tour.

David Sutherland regards himself as a dinosaur of a documentarian, but he’s also, ironically, a pioneer.

In the last two decades, he has made three films for Frontline, a plodding pace for even the most persnickety producer. In addition to being hallmark presentations on PBS, all three films are audio masterpieces, enhanced by sounds culled from thousands of recordings.

Sutherland spent six months mixing the audio on his newest film; others might have done it in a week, he said. Sutherland’s cutting-edge audio style reflects an artistry and precision that gives no quarter to labor-saving technology.

His latest work, Kind Hearted Woman, a five-hour story of abuse and triumph for a Native American woman, airs April 1 and 2 on PBS, a coproduction of Frontline and Independent Lens.

Kind Hearted Woman took six years to produce, including three-and-a-half spent interviewing and tagging along after Robin Charboneau, a victim of sexual abuse as a girl who discovers — with cameras rolling — that her ex-husband has been abusing their daughter.

After making The Farmer’s Wife (1998), a look at a struggling Nebraska farm family, and Country Boys (2006), a coming-of-age story in Appalachian Kentucky, Sutherland decided to give a face to the ugliness of molestation. Selecting that face was not easy.

“It takes me a long time to find people,” he told a group of TV critics last month. “With The Farmer’s Wife, I lived with 52 farm families for a minimum of four or five days over two-and-a-half years. For this one, I interviewed a lot of Native women.”

Initially, Sutherland was not convinced Charboneau was the right choice. He knew she could stay with the project for the years it would require, he knew she was articulate, “but I thought she was too passive.”

Charboneau surprised the filmmaker. Over the course of filming the documentary, she moved six times, delivered testimony in an emotional court hearing that sent her ex to jail, took residence in a shelter for battered women, enrolled in college, dropped out and enrolled again. “I thought this was going to be a docile, passive picture, and I was totally wrong about it,” he told Current.

Kind Hearted Woman is, first and foremost, an intense look at a complex individual and, only indirectly, an examination of the issue of abuse and the vagaries of a tribal justice system, Sutherland said. His goal in making it was to allow viewers to see the world through the eyes of Robin Charboneau.

“It’s very important to me that I be defined as a portraitist,” Sutherland told one interviewer. “I’m not an investigative journalist. I’m really interested in nuances of personality.”

Sutherland credits his father, who died last year at age 93, for teaching him to talk heart to heart with his subjects. “My dad told me to never be afraid to be afraid, and never to be too embarrassed to cry. And I’m not. I’m not afraid to stand up for what I believe in, and I cry at movies sometimes, but I’m tough. And I hope I’m a decent person. I think I am.” 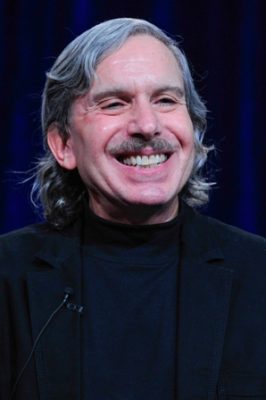 At one point during a particularly emotional interview with Charboneau, Sutherland couldn’t hold back his own tears. “I ruined the interview,” he recalled. “The intimacy is very, very real.”

Sutherland’s skills for listening and observing were transformational to Charboneau, who described how she shed the passivity that had initially concerned the filmmaker. “When he first came, he was talking to a little girl,” she said during an appearance last month at the Television Critics Association Press Tour. “She didn’t have a voice. She had a spirit but it was gone. It was lost. She didn’t know who she was. She didn’t know what it was to be a woman. . . . And all of a sudden comes this crazy man who listened to me. . . . I found my voice. I found my spirit. He listened to a little girl when nobody else would listen. That’s what David did.”

During production, Sutherland encountered all kinds of obstacles — from restrictions on filming inside a federal courthouse to funding problems that typically plague independent films.

“Look, when you do a film like this, you don’t start out with money,” Sutherland said. Kind Hearted Woman would cost about $2 million, including expenses for outreach activities supporting the PBS broadcast. Sutherland started production with a lot of faith, a little seed money and a promise from ITVS.

“I did it on spec,” he said. “I needed to start shooting or I would lose my subject. We had serious trouble with money until we got a CPB challenge fund grant about a year in,” he recalled.

After he finished shooting, there were thousands of audio clips to log, in addition to his video footage. Sutherland proudly proclaims that no one incorporates audio into documentaries the way he does. For the five-hour film, he estimates he shot 500 hours of video and recorded an additional 300 hours of audio tape.

“Most people, they might use one radio microphone and a boom. Sometimes two,” Sutherland said. “I use as many as six tracks. And you have to mike all those people. And when you play a tape back, you can’t make anything out because one track cancels out another. They phase. They echo. So there’s all this time that goes into separating the track just to play everything back.”

In Kind Hearted Woman, you can hear Charboneau breathing cold winter air, the patter of disc jockeys on a local radio station and the clickety-clack of freight trains — lots and lots of trains. Sutherland collected their sounds at different times of day. “I’ve gone out in the middle of the night and got arrested by security for the railroad line,” Sutherland said.

Given the meticulous and time-consuming way Sutherland, 67, makes his films, you might think Kind Hearted Woman would be his last. Seven years ago, he thought Country Boys was his finale. “I swore I’d never do it again, but then I missed it,” he confessed.

“I’m a good dad, and I think I’m a good filmmaker, and I’m fairly useless at everything else.” Also, he added, “Financially, I need to keep working. I’m OK now for a while, but I’m not OK enough to retire.”

Sutherland hasn’t decided on the topic of his next film, but he knows he’ll shoot it somewhere in America’s heartland. “I never grew up around the prairie, but I always liked the Midwest. I like the ocean and I like New England, but there are too many dense trees. I like the prairie.”

And he likes being a dinosaur who takes months to find his subjects, years to shoot them and more months to edit the audio.

“I may be a dinosaur, but I’m not burned out. I’ll jump like a jack–in–the–box to do it one more time.”