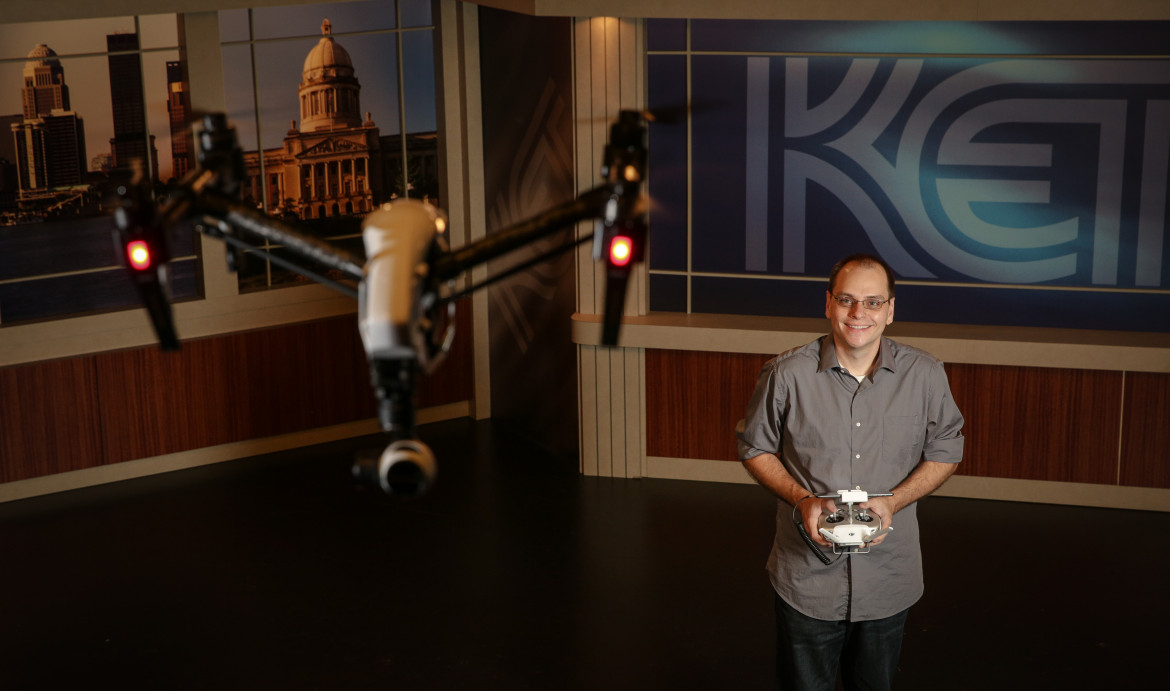 Drone enthusiasts in public media hope that upcoming changes in FAA regulations could lead to a big expansion of use of the devices among broadcasters.

The commercial drones under consideration at the FAA are generally about 2 feet across and weigh less than 10 pounds, usually mounted with a camera and piloted remotely from the ground. Under current rules, stations that want to capture footage using drones have to meet strict FAA requirements, including obtaining a certificate of authorization, private pilot license and an exemption allowing an unmanned aircraft into national airspace.

The pilot licenses are the biggest obstacle, according to Justin Allen, producer/director at Kentucky Educational Television. According to the Aircraft Owners and Pilots Association, licenses can cost upwards of $9,000. That’s too expensive for most stations, Allen said, and acquiring one doesn’t even guarantee adequate preparation for operating a drone.

“Growing up playing video games is better practice than being in a cockpit,” Allen said. “It’s a bit absurd, but those are the rules right now.”

The proposed rule changes would make it much easier for stations to start using drones, eliminating the need for a private pilot license and instead allowing individuals to take a test to become a drone “operator.”

What those changes could mean for stations will be among the topics discussed at the National Educational Telecommunications Association conference Oct. 5–7 in Tampa, Fla. A live session about drones will address best practices and feature a drone demonstration.

Allen said he believes drones will spike in commercial popularity when the FAA introduces the rule changes, which are expected to take effect at the beginning of next year.

“I think [drones] are definitely the future,” Allen said. “A drone is like the biggest, longest jib arm you’ve ever had, so you can get quality shots from almost any distance.”

For KET, drones will be able to take footage of state parks and Kentucky landscapes, which are frequently featured in KET’s productions. But some shots can only be captured by a drone.

“To literally be able to fly from 1,000 feet, [down] into a building, through doors and trees and other obstacles, that’s the kind of precision you can get with a drone,” Allen said.

WEDU in Tampa, Fla., is also waiting for the FAA to lower barriers to commercial drone use after buying a drone in the past year. “We’re in the game, but we’re not really there yet as far as using it out in the field,” said Danny Bruno, a WEDU videographer who will also present at NETA.

Bruno has already started thinking of ways that drones will allow him to enhance WEDU’s footage. An upcoming WEDU shoot at the Kennedy Space Center at Cape Canaveral would be a perfect opportunity to use a drone, Bruno said.

“There are going to be times where we know right away a segment we’re working on will be really cool with a drone,” Bruno said. The technology can offer opportunities to take “nice, creative beauty shots that add a certain flair” to productions, he said.

However, organizations shouldn’t rush drones into production and must ensure that drone operators know what they’re doing, Allen said.

“[Drones] are almost too easy to fly, and people become overconfident quickly,” Allen said. “They’re fun to use, which will make you want to go too fast, too quick.”

“For stations that are going to go out and buy [a drone] and try to use it on their next production, that’s a bad idea,” he added.