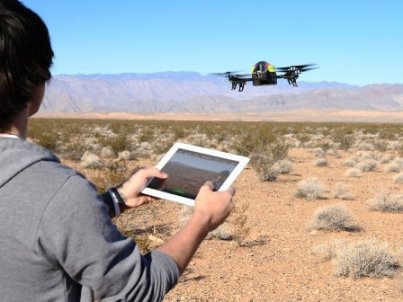 Are small, nimble flying robots the next newsgathering tool for public broadcasters?

NPR station KBIA-FM at the University of Missouri-Columbia has secured a $25,000 grant from the university’s Information Technology Committee to explore using drones to shoot aerial photography and videos, accessing spots that reporters can’t reach.

A Parrot.AR Drone 2.0, controlled by a tablet app. (Photo: Parrot)

Digital Content Director Scott Pham told Current that he proposed the work as an interdisciplinary project involving the station, the engineering school and the journalism department. The university’s IT engineers will help research and build the devices; journalism graduate students and Bill Allen, assistant professor of journalism, will help design and launch them.

News drones could be used to “photo stitch” together images of vast areas of land to create highly accurate maps, Pham said, and  for watchdog reporting projects monitoring the progress of public works construction projects. He also came up with the idea of using drones to cover floods — by flying them over a flooded area, journalists would get an eagle-eye view of the damage.

The University of Missouri isn’t the only higher-ed institution studying the use of drones.  In June, journalism Professor Matt Waite got $50,000 from the Knight Foundation for his Drone Journalism Lab at the University of Nebraska-Lincoln.

Use of military drones in intelligence gathering and counter-terrorism activities has become increasingly controversial during the Obama administration; but drones designed for civilian purposes are quite different. The news drones will be similar to those built by hobbyists, according to Pham. They are much smaller – some look like model airplanes or helicopters, others are “squarish, and the size of a medium pizza box.”  KBIA plans to assemble several, and has already purchased rotors and controllers. Pham said they’re planning to launch sometime in late January or early February.

Although “computer nerds” have been tinkering with drones for nearly a decade, Pham said, “this is the time to influence the direction this technology will head. We’re starting to talk about how drones will fit into society.” The technology is  “loosely regulated”  by the Federal Aviation Administration, which has issued guidelines that the devices fly below 400 feet, don’t venture over populated areas or near airports, and shouldn’t be used for commercial purposes.

Pre-built hobby drones controlled by smartphones or tablets are available for around $300.

“There’s a lot of fear about drones in our daily lives,” Pham said. “NPR has a lot of trust and credibility among listeners, so we’re a good organization to begin using these.”

The station’s grant announcement has received a lot of press attention, generating newspaper stories from The Associated Press as well as online articles by Politico and Slate.

This post has been revised from its original version.
ShareTweet EmailPrint More

One thought on “Sky’s the limit: KBIA-FM gets $25k grant to create newsgathering drones”