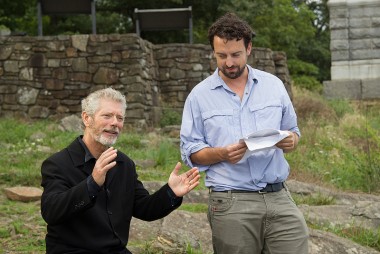 Actor Stephen Lang and Director Jake Boritt discuss size of the attack at Little Round Top for The Gettysburg Story on August, 2012.

A new documentary airing on Maryland Public Television this month incorporates high-tech cinematography to offer a fresh new take on the 150-year-old story of the Battle of Gettysburg.

Actor Stephen Lang, left, and Director Jake Boritt discuss the size of the attack at Little Round Top in August 2012 during production of The Gettysburg Story. (Photo: Jake Boritt)

Producers of The Gettysburg Story had exclusive overnight access to film Gettysburg National Military Park. Boritt Films, based in Gettysburg and New York City, paired with MPT to screen the film in theaters and distribute it on DVD.

Producer/director Jake Boritt experimented with a variety of new cinematography techniques during filming, including time-lapse sequences and aerial footage shot by a small radio-controlled helicopter, to produce unique footage of the 6,000-acre park.

With more than a week of access to the battlefield, Boritt worked with Seattle-based Freefly Cinema, an independent aerial cinematography company to use remote control helicopters to shoot footage of Gettysburg Park. Gyro-stabilization technology on the helicopter made it possible to film the landscape from a drone for the very first time.

To create three-dimensional battle maps, Boritt tapped Alexander Smith of Omega Darling, a post-production company specializing in animation and special effects, and 3Rings Media, both based in New York. Using a combination of geo-technology, satellite access and historical data, they produced new and accurate interpretations of battle movements.

The crew was also granted permission to film overnight in the park — another production first, according to Boritt. To make the most of their access, producers used an Astro time-lapse camera with digital single-lens reflex to shoot in low light, capturing artful film sequences.

Boritt, a Gettysburg native, adapted the film project from the Gettysburg Battlefield Audio Tour, a previous project of his father, American history scholar Gabor Boritt. Both the audio tour and film adaptation of The Gettysburg Story are narrated by actor Steven Lang, whom the filmmaker credits for a dramatic interpretation of the script that brings the story of the battle to life.

“Gettysburg is so beautiful, it almost worked against the story of men killing each other,” Boritt said.

The production was primarily funded through a $150,000 grant from the Community Foundation of Tampa Bay and a Kickstarter campaign that raised more than $65,000 from more than 500 contributors. The Shaara Foundation and major donors also backed the film.

The film premieres on MPT on Nov. 19, the 150th anniversary of the Gettysburg Address.

Dynamic Perception provided motion control for time-lapse sequences in the film. An earlier version of this article incorrectly credited the Michigan-based company for producing the three-dimensional battle maps that appear in the show.
ShareTweet EmailPrint More