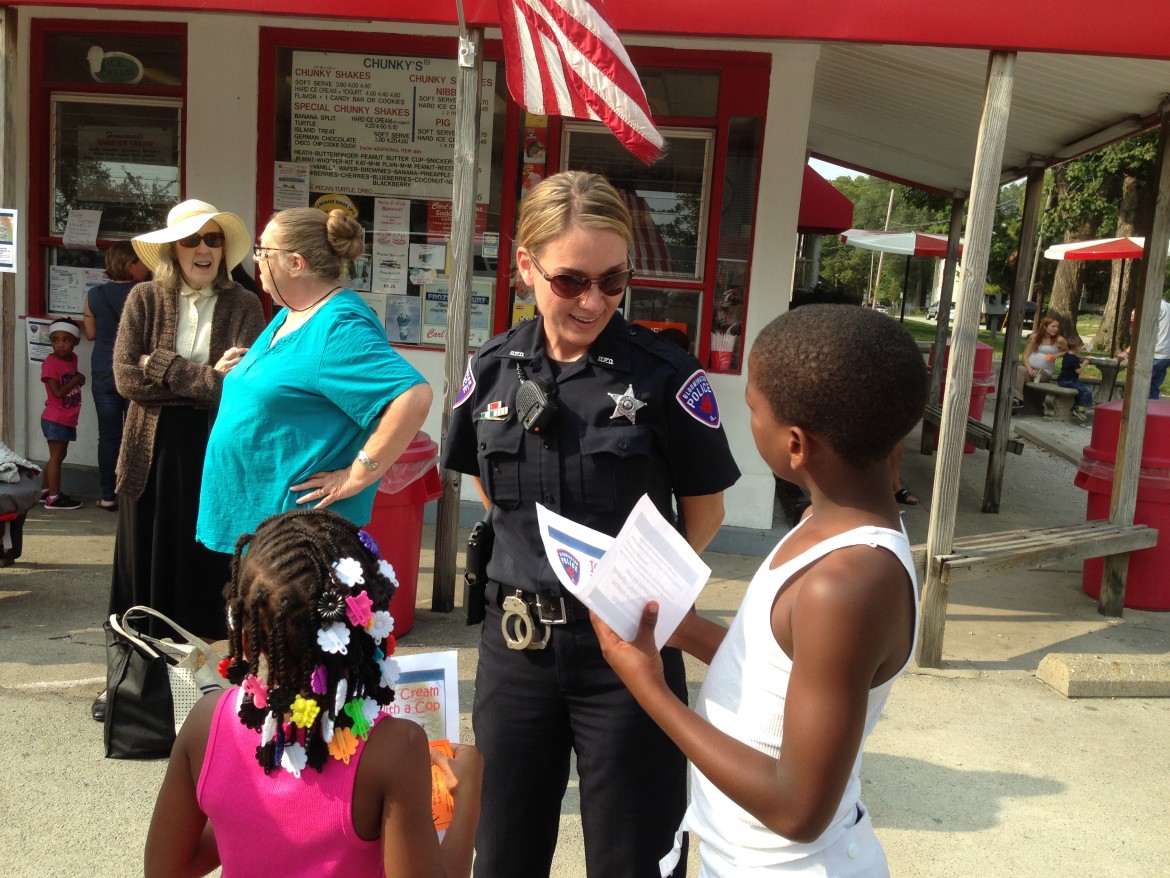 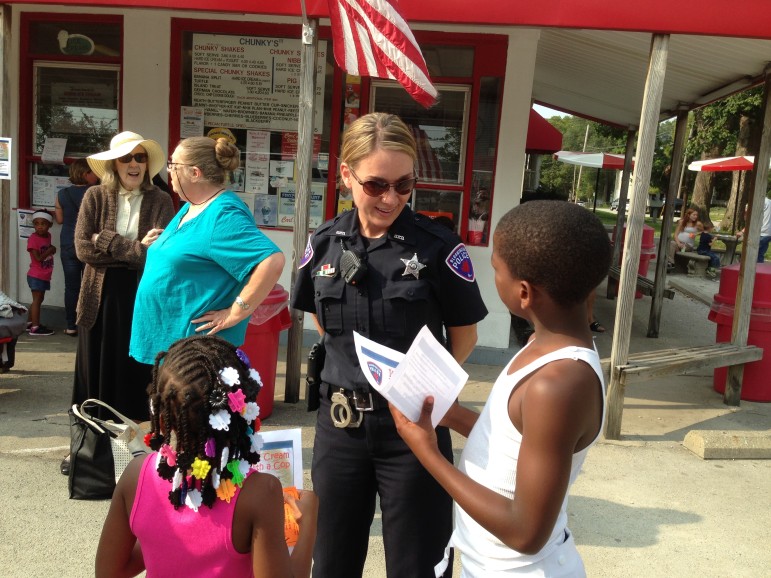 Bloomington Police Officer Sara Mayer talks with kids at Ice Cream with a Cop, a community-relations event hosted by the police department. The event followed a WGLT news series in which African-American residents discussed bad experiences with the police force. (Photo: Not in Our Town Bloomington-Normal)

Could Ferguson happen in our town?

That’s the question that led WGLT, a small public radio station owned by Illinois State University, to conduct its award-winning investigation into racial issues in its community of Bloomington and Normal, Ill.

The station began reporting for its five-part Police and Race series last August, spurred by an Illinois-mandated study of traffic stops that indicated that people of color were being stopped and searched significantly more often than white drivers. The study also found that canine searches were ordered more often during traffic stops involving people of color, though white drivers were more frequently found with illegal drugs or weapons.

Shortly after the study came out, protests reacting to the death of Michael Brown, a young African-American who was shot by a police officer in Ferguson, Mo., grabbed national headlines. The news from a community less than 200 miles away added to the significance of WGLT’s investigation.

“We were just reporting on what we thought were fairly interesting dynamics that were the same here as in much larger metro areas,” said Bruce Bergethon, WGLT’s g.m. “And then the situation in Ferguson brought that to everyone’s attention nationally.”

Rather than ride the coattails of the big national news story, WGLT’s four-person newsroom decided to take a step back to “get a balanced picture” of the relationship between police and minorities in the community, according to Bergethon. Over the next four months, WGLT reviewed recordings of police interactions with minorities, examined court records and interviewed public officials, scholars and residents of Bloomington-Normal.

The result was a series of radio reports that shined a light on hostile encounters between police and African-Americans in Bloomington-Normal. The series, which aired in December, would go on to win two National Murrow Awards from the Radio Television Digital News Association. An RTDNA Kaleidoscope Award for outstanding coverage of diversity recognized Police and Race and also In Their Own Words, a WGLT series from earlier in 2014 that shared stories from a diverse range of community members.

WGLT’s lead reporter on the Police and Race coverage, Judith Valente, started by researching minority representation among public officials in Bloomington-Normal. To her surprise, both the Bloomington and Normal police stations told her to file Freedom of Information Act requests to access that information.

“These are college communities,” Valente said. “There’s a tendency to congratulate ourselves: We’re smart people, a middle, upper-middle class community; we don’t have problems [here]. But if you’re a person of color, you don’t see it that way. And it was important for our majority white citizens to hear from African-Americans themselves.” 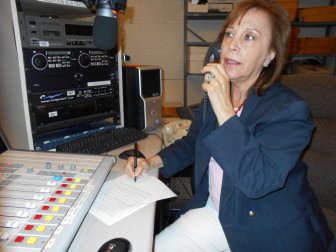 The reporters at WGLT reached out to members of the black community. Nearly everyone they talked to had a story to tell about an encounter with police that they felt was unjust. But getting them to talk on air about those encounters proved difficult.

“Probably the hardest part [of our series] was finding African-Americans who were willing to speak, because not many people were asking them,” Valente said. “And could they trust us? Showing that we really were concerned and wanted to hear their perspectives was a hard thing.”

WGLT was eventually able to convince multiple African-Americans to recount their run-ins with police. In one story, a simple stop for loud music turned into an incident with four squad cars, a canine sniff and an arrest after a young man started recording the police on his phone, which was still illegal when the incident occurred. In another story, a young man described how his eye contact with an officer prompted the officer to trail him as he went home.

Perhaps the most revealing story involved an Illinois State student who dropped a textbook on his way home after studying late into the night. When the student drove back to retrieve it, he was pulled over by an officer, who then ordered a canine sniff. “[Your] story is not making sense,” the officer said in a recording made by the student.

Valente also reviewed almost 100 traffic stops in Bloomington-Normal and used recorded audio from the stops in the series.

“You could actually hear the police interactions with people, and the public could make up their own minds when they heard these interactions,” Valente said. “I didn’t make a judgment about the police officer who pulled over and searched the young man looking for his schoolbook. People could hear how he talked and decide for themselves.”

Local police gave WGLT recordings after the FOIA requests, but the station’s reporting further tested its relations with police. At one point Bloomington’s police chief denied Valente further interviews after Valente played him a recording of a police encounter made illegally by a young African-American male. The police chief responded by sending a letter to officials, including the mayors and city managers of Bloomington-Normal and the state’s attorney, calling the reporter unethical.

“I thought, ‘I’m just doing my job here, just asking the questions that need to be asked,’” Valente said. “I didn’t expect my journalistic integrity to be called into question.”

“The police seemed to think they were above being questioned because we’re Bloomington-Normal; we’re not Ferguson, we’re a college town. No one questions us,” Valente added.

Ultimately, WGLT staff visited Bloomington’s police headquarters and smoothed things over with the department, which resumed contributing to the station’s reporting.

“I don’t think we ever got a letter saying thanks for the outstanding coverage you did,” Bergethon said, “but we have very good working relationships with all of those police departments.”

‘In their own words’

WGLT’s Police and Race series aired after In Their Own Words, Valente’s earlier concept for exploring issues of race in the community. The series asked a diverse range of community members, including gay, transgender, Muslim, Hispanic and African-American residents, to tell their stories about living in Bloomington-Normal.

Valente developed the idea after hearing from African-American members of the community at YWCA meetings and watching a PBS documentary about Zora Neale Hurston, the author and folklorist who gathered stories from Southern African-Americans.

“Most of the leadership of our community is white; most of the people who teach at the university who we call upon as experts are white,” Valente said. “There was a true need to get more diverse voices onto the radio.”

Camille Taylor, a retired African-American educator who has lived in Bloomington-Normal for over 40 years, told her story to WGLT. She recounted an experience from her teaching days: A young student learned that the light-skinned Taylor was black and said his family wasn’t supposed to like black people. Taken aback, Taylor sat down with the student and suggested he decide for himself, and the relationship was quickly repaired.

Much to the surprise of Taylor and others at the station, an elderly white woman called the station shortly after Taylor’s piece aired. She accused Taylor of lying and WGLT of trying to rile up the community’s black population.

“I was shocked someone would call in and call me a liar,” Taylor said. “From her position of privilege, it’s easy to think these types of things don’t happen. But I dealt with that frustration and pain that day. That’s why I became an educator, to bring people from a place of ignorance to a place of knowledge.”

Both Bergethon and Valente said they believe WGLT has a part to play in bringing attention to racial issues in Bloomington-Normal and were pleased with how their coverage was received.

“By and large, the reaction to it was almost entirely positive and grateful,” Bergethon said. “It was, ‘Thank you for talking about this in a way that’s not sensationalistic. Thanks for treating us like you’re public broadcasters: thorough, conscientious, objective and balanced.’”

Whether any changes within the community occurred as a result of the series is hard to say, but Valente believes that by airing experiences of a diverse range of community members, the station helped broaden the minds of people who weren’t hearing such stories anywhere else. Camille Taylor’s experience seems to support this view.

“The people I heard reactions from always seemed to say things like ‘I didn’t know that’ or ‘I never knew that.’ My reaction was, ‘Good, now you know,’” Taylor said.

“Maybe if more radio stations did stuff like that, and more people heard stories like that, you could change the hearts and change the minds,” Taylor continued. “You can’t change your heart or your mind if you’re not aware of something.”

Taylor is active in the local chapter of Not in Our Town, a movement that grew from a 1995 PBS special about how citizens in Billings, Mont., stood up against hate crimes committed in their community. The group in Bloomington-Normal had been largely dormant until earlier this year, when a court case revealed troubling details of how a local police officer reacted to the stabbing of a black man.

NIOT: B/N responded by hosting forums and summits focused on police practices, improved relations between police and the community, and minority representation in local police forces. Taylor, co-chair of the chapter’s education committee, hopes greater media attention, like the coverage showcased by WGLT, will help NIOT: B/N in its efforts to build awareness and support for change.

And as to whether something like Ferguson could happen in Bloomington-Normal, Bergethon believes WGLT’s reporting yielded a definitive “yes.”

“The actual sort of root condition of this uneasy relationship between law enforcement and people of color, we definitely learned that’s not something that happens [just] in other people’s towns,” Bergethon said. “It’s everywhere.”