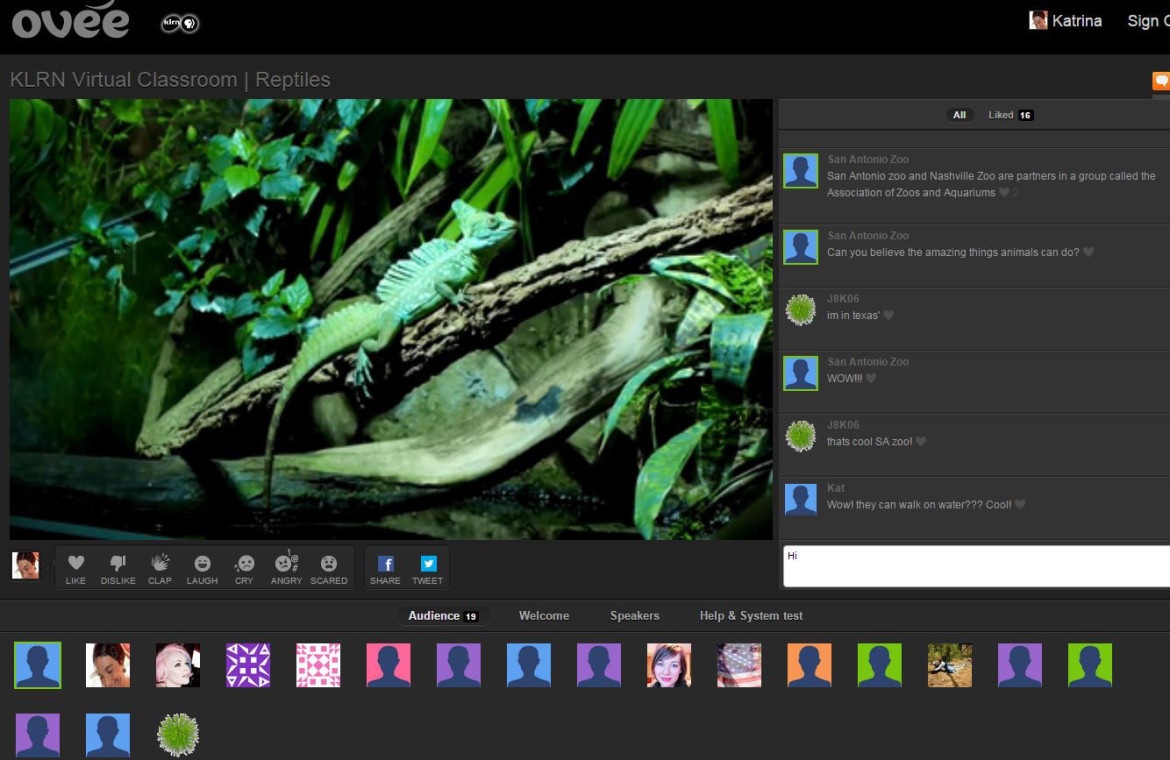 Since Virtual Classroom’s launch in April, nearly 400 participants from 27 states have met online to take lessons about nature. KLRN has also held three introductory sessions to show parents and teachers how to use OVEE, an interactive streaming platform that ITVS and stations also use for outreach initiatives.

Katrina Kehoe, KLRN’s marketing and communications v.p., credited Pamela Price, the author of two books about home school- ing, for the idea to develop the prototype.

Two years ago the San Antonio mom raved on Twitter about using KLRN’s broad- cast content for homeschooling lessons. Kehoe reached out to suggest that the two meet to chat. “The conversation was about how great PBS is for homeschoolers,” Kehoe said, “but I knew we could be doing more.”

Homeschoolers are active on websites nationwide, Kehoe realized, and are a readymade online audience for PBS’s educational programming. After her meeting with Price, Kehoe invited several homeschooling mothers and students to attend an OVEE screening of a Nature episode about raccoons.

The kids “had so much fun” and really took to the platform, Kehoe said.

The station’s grant writer, Stephen Beach, told Kehoe about the Knight Prototype Fund, and she decided “it was time to put the idea on paper,” she said. The six-month prototype grants allow organizations to research ideas and test assumptions before building out a project.

Kehoe, Beach and Community Engagement Manager Jennifer Herrera honed their concept for the Knight Foundation. Virtual Classroom would offer screenings for parents, students and teachers. Experts would participate to interact in real time during lessons. Links to PBS LearningMedia and other education assets would pop up at the end of each screening to connect parents and teachers to additional content.

The station partnered on the proposal with Gifted Homeschool Forum, where
Price is a member along with 25,000 other homeschooling parents. Forum members are sharing ideas for curriculum development.

KLRN’s proposal was among more than 600 applications that competed for 20 grants from the Knight Prototype Fund, Kehoe said. The foundation announced its grant to Virtual Classroom this spring.

Since then, the station has sponsored OVEE screenings featuring various public TV programs about animals. Upcoming screenings will focus on topics about the natural world, such as the sun, plants, food and weather. KLRN’s learning media staffer, a former teacher, plans monthly OVEE sessions this fall for teachers who want to use PBS LearningMedia content to teach Civil War history.

While schools were out for summer break, screenings averaged up to 30 participants from eight states, Kehoe said.

The session on reptiles, featuring experts from the San Antonio Zoo, drew enthusiastic responses: “i held a big white snake at the san antonio zoo a few years ago. it was cold and freaky but they told me not to be scared,” typed one young viewer.

The station will present a report on its prototype project to the Knight Foundation in mid-October. “After we have had a chance to gather the data, analyze the project and suggest next steps, we will determine how to acquire funding to keep going,” Kehoe said.

Kehoe is optimistic about the future of the initiative. “The most common comment we hear once someone has attended an OVEE screening in this series is, ‘The opportunities are endless with this project.’”

This story has been updated with a version from Current’s Sept. 8 print edition.