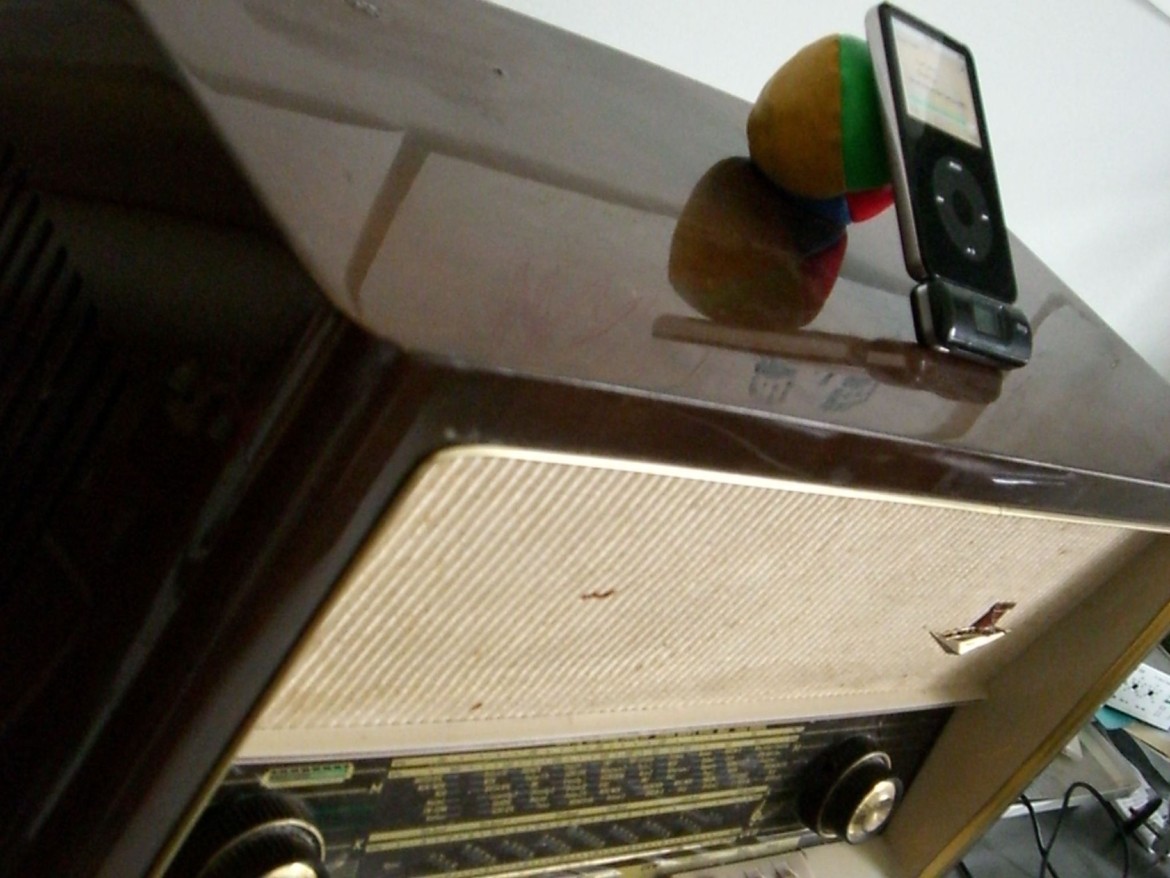 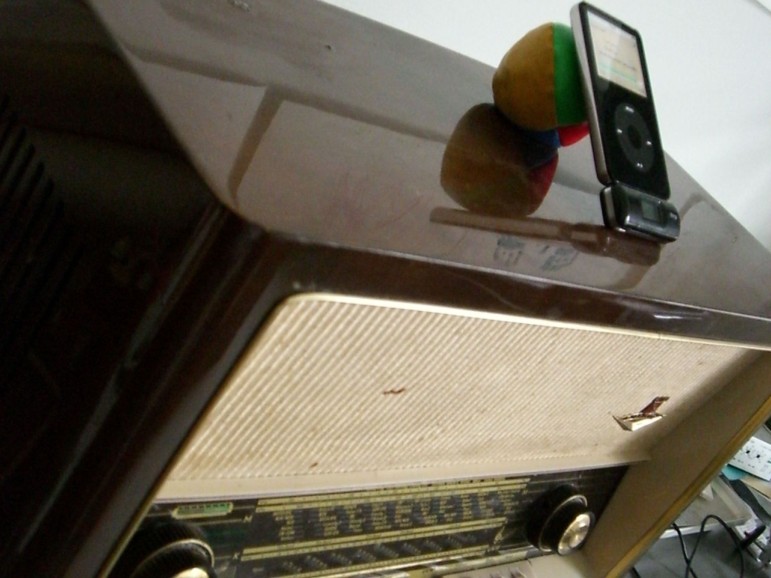 In her excellent piece for Current, “Why the push to launch podcasts is missing the point,” Michigan Radio Program Director Tamar Charney makes some very smart observations that got me thinking about the relationship between radio and podcasting in some new ways. But I think she’s a little wrong to assert that podcasts and radio are basically the same thing.

Her argument, if I may condense it and also read a bit between the lines, is that public radio managers are letting themselves off the hook by clinging to the notion that there are intrinsic formal differences between podcasting and radio.

“The real issue being voiced in yearnings for more podcasts — particularly by younger producers — is a desire for innovative content that sounds different from the classic public radio sound of Noah Adams and Susan Stamberg,” Charney writes.

After all, if there were irreconcilable differences between podcasts and radio, then managers would have a perfectly good excuse to keep airing Zombie Car Talk instead of giving one of their hip young talents an on-air at bat. “Yeah, that crazy podcast you kids do in your spare hours is great on the Internet, but it wouldn’t work on the air, so I have no choice but to keep trying to squeeze the tiniest drops out of this desiccated old sponge every Saturday morning,” such a manager might say (not that I know anyone like that).

Charney’s argument rests on the assertion that podcasting and radio are two different mediums for conveying the same type of content. And if I may extend her argument a half-inch further, managers who hide behind the fiction that podcasts can’t work on the air are just risk-averse ninnies who are neglecting public radio’s future in favor of one more safe, successful fund drive and Nielsen ratings book (my words, not Charney’s!).

I love this argument, and I agree with it. 90 percent of the way. The critique I’m about to offer is so close to an act of nitpicking that I considered not even writing it.

But I do think there are some intrinsic formal differences between podcasts and radio. Those differences have been significantly overstated, but they do exist. The medium has always shaped the message, from the Gutenberg printing press to YouTube.

Let’s look at the evolution of popular music in the mid-20th century. The standard song length was heavily influenced by the technical constraints of the 7-inch record, which can only hold about four minutes of audio per side at 45 rpm. Twelve-inch records hold about 22 minutes per side, so when both sides were filled with now-standard three- to four-minute songs, you got about a dozen tunes — the standard album format.

This format can, and now does, exist beyond the medium that originally shaped it. I bought a 10-song album on iTunes yesterday, and I doubt very much if the band considered the technical constraints of vinyl when putting it together.

Likewise, Marc Maron’s WTF podcast can be — and is — played on the radio, as Charney points out. However, I don’t think anything close to that show would have been born on the radio, for these reasons, among others:

1. Podcasts are free from clock constraints.

Unlike a radio show, a podcast doesn’t have to time out to a specific length, it doesn’t have to meet breaks at specified times, and hosts don’t have to “reset” the conversation every five minutes to let people who are just tuning in know WTF they’re listening to (pun intended). Nobody tunes in to the middle of a podcast.

These may seem like small things, but in my experience, they have a profound effect on the tone of a show. In the wild, conversations are not rigidly timed and we do not stop in the middle of them to restate who the participants are. To do so feels super-weird and always injects a formality that is the antithesis of everything a Marc Maron interview stands for.

I know of what I speak. I left full-time radio about a year ago for academia and have also been hosting/producing Current’s new podcast The Pub since January. Just today, I plunged back into the radio world, sub-hosting for pubmedia veteran Celeste Headlee on her new live daily show, On Second Thought.

Headlee values conversationality and informality above almost everything else on her show, which is why she asked me, of all people, to try filling her shoes for a day. (I’m known as a pretty laid back guy on-air.) But I don’t think I sounded very much like myself today as I negotiated a hard clock again, at least not the version of myself that I have cultivated since launching The Pub. That’s not a knock on Headlee’s show, nor am I trying to shift blame for my own failings to a set of dictatorial formal constraints. Some of us, like Headlee, are better at negotiating those constraints than other people, but they remain forever constraining.

Radio shows that seem to do best repackaged as podcasts either have spacious formats in which monologues and conversations can breathe, podcast-style (The Moth, Fresh Air), or are meticulously scripted narrative shows (Radiolab, This American Life) that, through sheer force of authorial will, can negotiate the formal constraints of radio more gracefully.

2. Most radio shows need to try to please a lot of people at once.

A niche audience cannot sustain a typical public radio station. Public radio content that does well in the ratings usually exhibits a certain predictability. Lots of different kinds of people can all get behind stuff that sounds generically “NPR-ish,” and they want to know that they can turn on the radio at any time and get something that’s more or less what they expect.

Podcasts, in contrast, can serve a much more rarified audience — people with the same peculiar interest or taste who are spread few and far between, but when united by the magic powers of the Internet form the core of 20,000+ people who collectively make a podcast commercially viable. This distinction results in content that is just plain different, and gloriously so, in my opinion.

3. Podcasts, as accessed by most consumers, are things that listeners “opt in” to.

Instead of just flipping on the radio and either loving or hating what they hear, podcast listeners usually find things they like and commit to them by subscribing. This results in a different relationship between the content creator and the audience.

Whereas the intro to an All Things Considered story needs to earn your buy-in in the first sentence or two lest you literally or mentally tune out, a podcaster whom you already know and trust can take a winding road to the point, as sex advice columnist Dan Savage usually does with the opening riff of his Savage Lovecast. Comparatively few radio broadcasters have achieved the level of trust that allows someone like Garrison Keillor to get away with telling a veritable shaggy dog story every week with his “News from Lake Wobegon” monologues.

This leads me to a concluding point, which is that podcasting is also formally distinct from other types of audio on the Internet, namely streaming. As I referenced with the link in my previous paragraph, early data yielded by the NPR One app (“the Pandora of public radio,” as NPR One editorial chief Sara Sarasohn describes it), shows that listeners who are streaming a semi-spontaneous assortment of public radio segments have little patience for content that meanders to the focus statement, and they tend to avail themselves of the “skip” button that NPR One offers them for the first time.

Listeners probably behave differently in a Pandora-like environment than they do when they pull up their favorite, weekly hour(ish)-long podcast. Of course, people can stream podcasts through apps like Stitcher that serve up a semi-randomized playlist of shows based on listener tastes. The lines between these mediums are both gray and fluid. But the lines do exist, and we need to reckon with them.