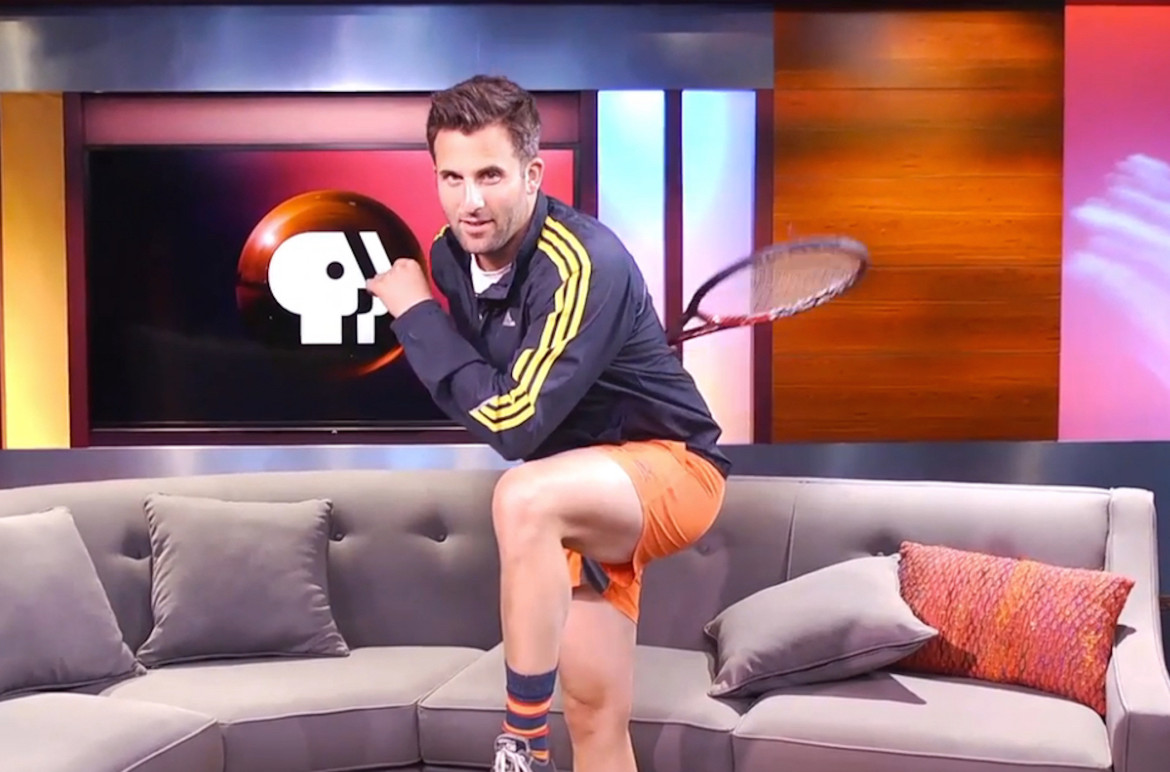 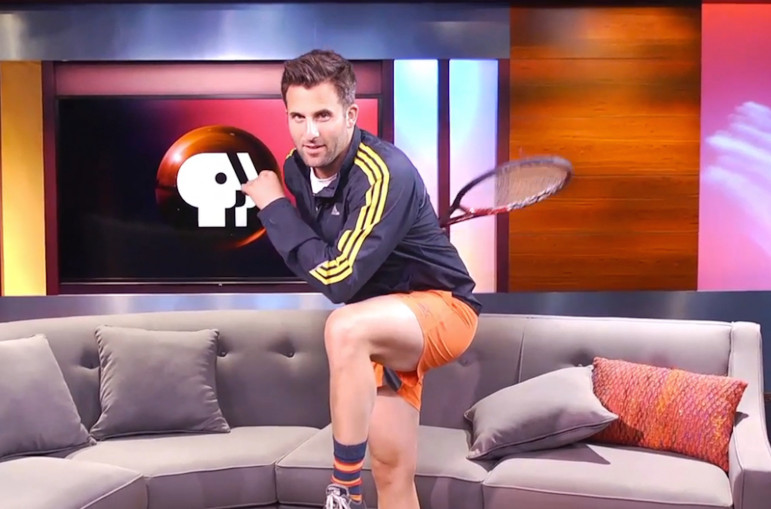 PBS is ramping up its efforts to attract a new generation of media buyers as program sponsors, rolling out a campaign that promotes its brand and audience through web-based marketing and traditional paid ads.

The response so far has been promising. Since a new sponsorship website soft-launched in late March, “three qualified leads have been generated,” Betsy Gerdeman, development services s.v.p., told Current, “and we have not begun the paid media campaign in earnest yet.” That’s set for this fall.

PBS is also considering participating in the 2016 television upfronts, where major media buyers hear pitches of the television networks new programs — a commercial media tradition that public TV hasn’t participated in since the mid-1990s. “If you want to be on the media buyers’ radar and under consideration for national sponsorship, PBS needs to be part of that conversation,” said Chris Schiavone of City Square Associates, whose research has shaped PBS’s strategy to bolster sponsorships.

Schiavone’s Boston-based consultancy conducted months of qualitative research, including focus groups and interviews of dozens of media buyers, in 2013. Findings from the study were presented to attendees of this month’s Public Media Development & Marketing Conference in Washington, D.C.

Public TV has a lot of work to do to cultivate relationships with today’s ad buyers, Schiavone found. “PBS is not even on their radar,” he said during an interview. Study participants weren’t familiar with PBS’s content or audience demographics, and most didn’t even associate the Masterpiece megahit Downton Abbey with PBS.

But the research found an opening to change that. Those same media buyers share “an incredible wellspring of affection for PBS,” Schiavone said. After learning more about what PBS can offer sponsors, “they see this as a really interesting, exciting opportunity. They want to learn more.”

City Square also found that the attitudes of PBS viewers make them a receptive audience for sponsorship messaging.

But ad buyers themselves have some negative attitudes about PBS, according to the City Square study. “Buyers routinely underestimate the PBS audience composition, ratings and rank among all networks,” Schiavone said. “More often than not, if you ask them to guess where PBS sits in the top 30 networks, they put it near the bottom, adjacent to IFC. When you show them the actual data, that on a TV household basis PBS is number five and in the top 20 networks among 25- to 54-year-olds, they’re shocked.”

Part of the problem, Schiavone said, is that media buyers have found it difficult to make contacts with the right people within PBS. To address that, PBS built a sponsorship web page that provides a smooth flow of leads directly to a new sponsorship sales unit at PBS. The site, which went live March 20 in a soft launch, allows PBS to handle inquiries and facilitate a handoff to reps for a specific program or area of interest.

That web page also features a short video starring Steve Goldbloom of Everything But the News, the PBS Digital mockumentary series now in its second season. Goldbloom uses humor to describe (and show) the types of messages underwriters can place on PBS, and why they may avoid other approaches. That advice comes complete with an embarrassed Goldbloom who, while performing in a fake over-the-line underwriting spot, accidentally smashes a tennis ball into the set behind him.

It’s a new approach for PBS, Schiavone noted, and is intended to clarify its brand to potential underwriters.

“There’s a fair amount of confusion with the industry-facing brand,” he said during the PMDMC session on the findings. “You who work in public media feel like the PBS brand is so clear — and it is to the consumer. But from the trade perspective, not so much.”

‘Good moment to do fresh outreach’

The study was commissioned in response to an ongoing drop-off in PBS corporate sponsorships that began in 2008, Schiavone said. 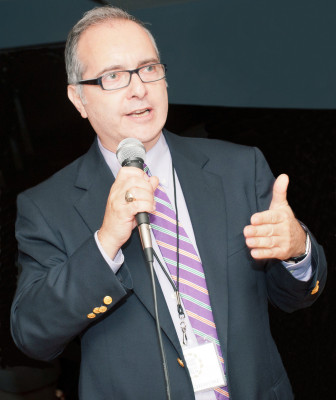 Over the past few years, “the success of Downton, recent Ken Burns titles and other programming events also brought PBS into the spotlight in the media,” he noted. “So it seemed a good moment to do fresh outreach to the media-buying world.”

Primary clients for Schiavone’s research on the media-buying marketplace were the public television sales organizations, including the Sponsorship Group for Public Television at WGBH in Boston, as well as producing stations WETA in Washington, D.C., and WNET in New York. “PBS offered to invest resources to study the trade marketplace in order to assess the opportunities and obstacles,” he said.

So City Square Associates, which has conducted similar research in commercial media for two decades, met with representatives of 18 major advertising agencies and 50 major national brands, including Dove, Neutrogena, Petco and IBM. The 22 initial individual 75-minute interviews in New York and Los Angeles were followed up with three 75-minute focus groups with 24 more respondents.

The results were enlightening.

For one exercise, Schiavone said, buyers were asked to develop a media plan for a family-friendly brand interested in reaching upscale women 35 to 64 years old. “We gave them a description that would fit PBS perfectly,” he said. Subjects were told to note all TV networks or channels where spots might air, and instructed to name as many outlets as possible.

“Out of 26 people interviewed,” Schiavone said, “just one mentioned PBS. One.”

Findings also showed that media buyers know very little about PBS’s on-air content or digital assets. “That’s shocking, in some respects,” Schiavone told the crowd at PMDMC. “With all the press that Downton Abbey received, you’d think that they’d all be talking about it. They were talking, but when they watched it was through over-the-top outlets and not their local PBS station.” Hence, the disconnect.

Research also showed many misunderstandings of marketing on PBS. “Some buyers think all you can do is slap on a logo,” Schiavone said, for a quick “This program brought to you by … ” underwriting message. “They don’t even know they can get 15- and 30-second spots,” he said.

That’s where the video starring Goldbloom comes in. “The idea wasn’t to give a video presentation on underwriting guidelines; buyers can get those if they need them,” Schiavone said. “This was more to break down resistance among media buyers.” It’s less than two minutes long.

“Will you fit in on PBS?” the opening title card asks, while a narrator says, “Pssst. We know what you may be thinking. Some brands worry their established creative can’t fit in if they sponsor PBS. We get that. Let us show you something.”

Goldbloom is introduced as “one of the newer guys on PBS, doing his best to fit in. As Steve is learning, there are times that what works on other networks can look awkward on PBS.”

For an imaginary sponsor called Smash, Goldbloom, playing a news host, suddenly jumps up to serve a tennis ball — which ricochets with a loud crash into the set behind him.

He also wears a big red boxing glove as word bubbles above him read, “Would Gwen Ifill do this? Nope.”

In the end, Goldbloom finds his place at PBS and tells underwriters that they can, too. As the narrator notes, “The truth is, we have a unique brand environment.”

That uniqueness is good, Schiavone said. PBS can leverage its ability to offer something different to media buyers.

“Let’s take a blockbuster, ad-supported show: The Walking Dead,” he said, referencing AMC’s ad-supported zombie thriller. “For many brands, that’s a great solution: great ratings, very engaged following. But there are also lots of brands that don’t want to be associated with exploding zombie heads.”

PBS provides an alternative that will be attractive to media buyers looking for “family-friendly premium content that attracts thoughtful viewers,” Schiavone said.

Schiavone sees next year’s television upfronts, to be convened in New York and Los Angeles, as one way to get that message across. That’s where networks will woo major sponsors for coming TV seasons in both large-scale events as well as one-on-one meetings.

PBS hasn’t made a decision on whether to participate yet, according to spokesperson Jennifer Byrne. Right now it’s focused on rolling out the trade marketing campaign targeting ad buyers. After that work wraps up in December, City Square and PBS will evaluate how to move forward.

From Schiavone’s viewpoint, “it’s not a question of whether PBS should participate in the upfronts, but how to do so. It’s a no-brainer. If you want to be on the media buyers’ radar and under consideration for national sponsorship, PBS needs to be part of that conversation.”