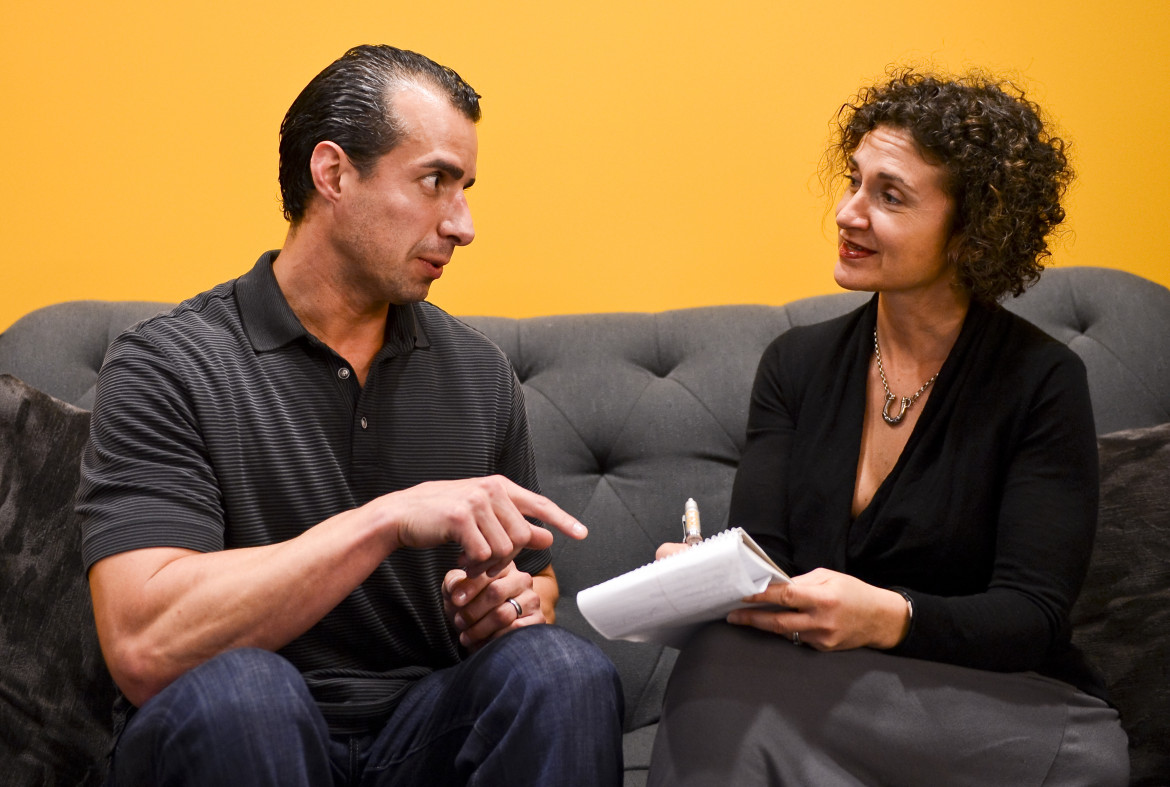 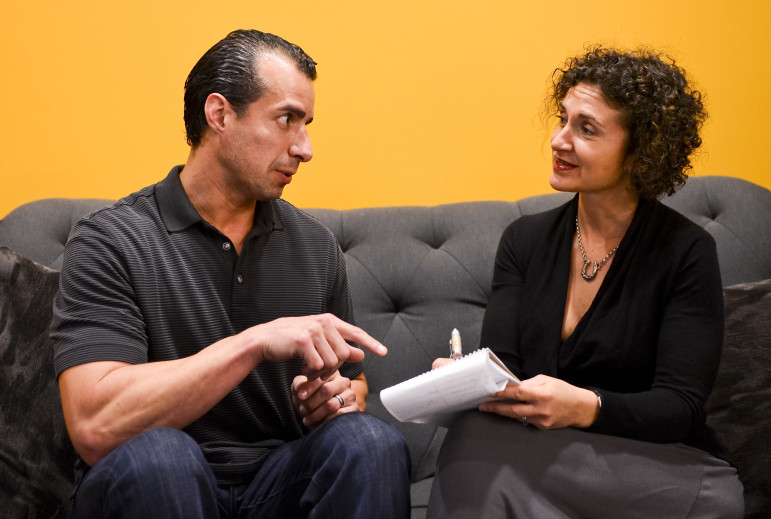 Hosted by A Martinez and Alex Cohen, Take Two has surpassed all other KPCC local productions by drawing the largest audience and the most Latino listeners. (Photo: KPCC)

A case study by the Latino Public Radio Consortium examines the strategies and tactics that KPCC followed to increase its listenership among Latinos in Los Angeles, providing a model for other stations seeking to diversify their audiences.

The “Brown Paper,” released last week for distribution at the Public Media Development & Marketing Conference in Washington, D.C., found that KPCC’s total audience has grown 27 percent, and Latino listenership has nearly doubled since 2009. At the end of 2014, the station was the highest-rated public radio station in Los Angeles.

Its listener-sensitive revenue grew accordingly. The paper reports that KPCC’s listener support nearly doubled, from $6.5 million to $11.4 million; corporate underwriting revenue increased from roughly $5.3 million to $7.8 million between 2009 and 2014.

The effort proved wrong that KPCC would ostracize its white audience by trying to appeal to Latinos, said Edgar Aguirre, an LPRC board member and KPCC’s managing director for external relations and strategic initiatives. “It’s a win-win,” he said.

In addition to detailing the process that KPCC went through to achieve this growth, the Brown Paper includes “best practices for attracting any kind of audience that’s different from the one you’re serving,” said Ginny Berson, author of the report and former v.p. of the National Federation of Community Broadcasters. Berson is one of LPRC’s founding board members and worked on the case study as a consultant.

“We hope that [the paper] will be a conversation starter,” said Silvia Rivera, another LPRC founder who serves as vice-chair of the consortium’s board of directors. “Sometimes public media can lack the inspiration or success stories to say, ‘Hey, I want to do something like that.’ We rarely talk about the success stories in diversity. . . . Success is going to look different in different markets, but the ingredients are there.”

The paper, which LPRC commissioned with funding from CPB, lays out some of the factors that helped the station grow its Latino audience through the One Nation Media Project, a KPCC initiative to broaden the appeal of its public radio news service to attract English-speaking Latinos and other minorities. CPB also backed that three-year initiative in 2011, providing a total of $6 million in grants.

“What convinced people was the solid research they had,” Berson said. “This was not a question of, is this morally the right thing to do? — but it’s the right business decision. If we’re going to survive, we need to make this decision.”

For stations considering changes in strategic direction, Berson said, it’s critical to have “really solid research” to back up its decision-making and build support among board members.

But once a station moves to cultivate new listeners, it’s important to engage with the community you’re interested in attracting, Berson said. The “most important thing” KPCC did with its CPB grant, she said, was hiring Edgar Aguirre as its multiethnic outreach coordinator. During his first two-and-a-half years with the station, he coordinated more than 30 live events — such as “All in La Familia: L.A. Latino Businesses in the 21st Century” — and helped to build connections with Latino businesses and community leaders. Within the past year, the station has put on 52 live events that attracted 9,000 attendees.

Aguirre, who was promoted to managing director, said the audience for KPCC events “skews higher” with Latinos and other people of color than its broadcast audience, which remains predominantly white. Through the events, KPCC is “having conversations that are reflective of the communities we serve,” Aguirre said.

He also worked to make KPCC feel more accessible to people who had no other connection to it, offering tours of the station to community leaders and others.

“I think people feel special [when touring the station],” he said. They say, “‘Oh, this institution is mine too.’ It’s about opening the door and showing the institution to the community and really listening. ‘What do you want us to do more of?’” he said.

Berson described the decision to hire Aguirre as key to KPCC’s success. “Making that commitment has ultimately resulted in a lot more revenue for the station, because of the relationships he made,” she said.

Efforts to rework the station’s content and sound also made a difference in attracting more Latino listeners, Berson said.

“In addition to using livelier music for bumpers and liners, they started using humor for fundraising and promo spots,” according to the Brown Paper. “Another shift came when there was an increase in underwriters that were recognizably from the Latino community. They proved to be not only good for revenue, but also helped to establish a connection with Latino listeners.”

But as many public radio professionals know from experience, changing programs to attract a more diverse audience is difficult and often disruptive. As the paper points out, KPCC underwent a culture change to follow through on its strategy.

The station did this in part through its hiring decisions, by recruiting staff who “realize that differences within an organization make it stronger,” the paper said. The station provided training to those staff members “who were not comfortable with difference.”

Not everyone will buy into a new audience strategy, Aguirre said. “Maybe those people don’t stick around,” he said. “But you attract people that take you to the next level.”

For KPCC the most high-profile rupture over programming changes was Madeleine Brand’s decision to leave KPCC in September 2012, less than a month after her eponymous KPCC morning show was revamped and retitled to add co-host A Martinez.

Though Brand didn’t comment in the LPRC paper — which said she could not be reached — KPCC President Bill Davis acknowledged that he could have handled the situation differently. “We should have done more work on-boarding the new hires and working with the established staff who were worried that they were going to be replaced,” Davis said in the paper.

Davis described his “biggest mistake” as failing to realize that Brand “wasn’t committed to the co-hosting proposition.” KPCC, he said, should have “found another role for her at the station.”

The paper also discusses how the rift affected Martinez. “He felt that people on staff ostracized him and refused to engage with him,” the paper said. “‘It took at least a year before I felt like I wasn’t in a foreign country,’” he said in the paper.

Despite his rocky introduction to KPCC, Take Two, the new show pairing Martinez with co-host Alex Cohen, has succeeded. According to LPRC, it stands out among KPCC’s locally produced programs by drawing the largest audience and the most Latino listeners.

Aguirre described Take Two as “a critical lynchpin” in KPCC’s strategy to diversify its audience and workforce. “The fact that A is a Latino co-host is still a big deal for us, [and] the fact that he has a platform during prime time,” Aguirre said.

“We are investing in high-quality journalism that looks and sounds like the community we’re covering,” he said.

“I think the hardest part — and this is true for every organization — is to recognize what it means to be in a white-dominant culture and to recognize the ways the white-dominant culture has unwritten rules and ways of doing things,” Berson said. “If you really want people of color to feel welcomed, to feel comfortable and do their best work, you have to be willing to change the culture.”

Though CPB’s funding to One Nation Media put KPCC in a unique position to pursue its audience-growth strategy, Berson believes its tactics and lessons can be applied elsewhere. The key is getting a station’s board of directors “deeply behind” an initiative like the one KPCC undertook, she said.

The biggest takeaway from the paper, Berson said, is that stations “really have to want to do this.” If there’s not a strong commitment, “don’t do it because it’s too hard; it’s not going to work,” she said.

For Rivera, one key takeaway for stations is “to be explicit about who that audience is,” she said. “We kind of fall into a philosophical idea of wanting to serve a diverse audience. What diverse audience are you talking about?”

“Wanting it is not enough, but it is absolutely necessary,” Berson added. “That means being willing to go through a very thorough and challenging and somewhat risky process to get where you want to get to. It’s not something to be taken lightly.”