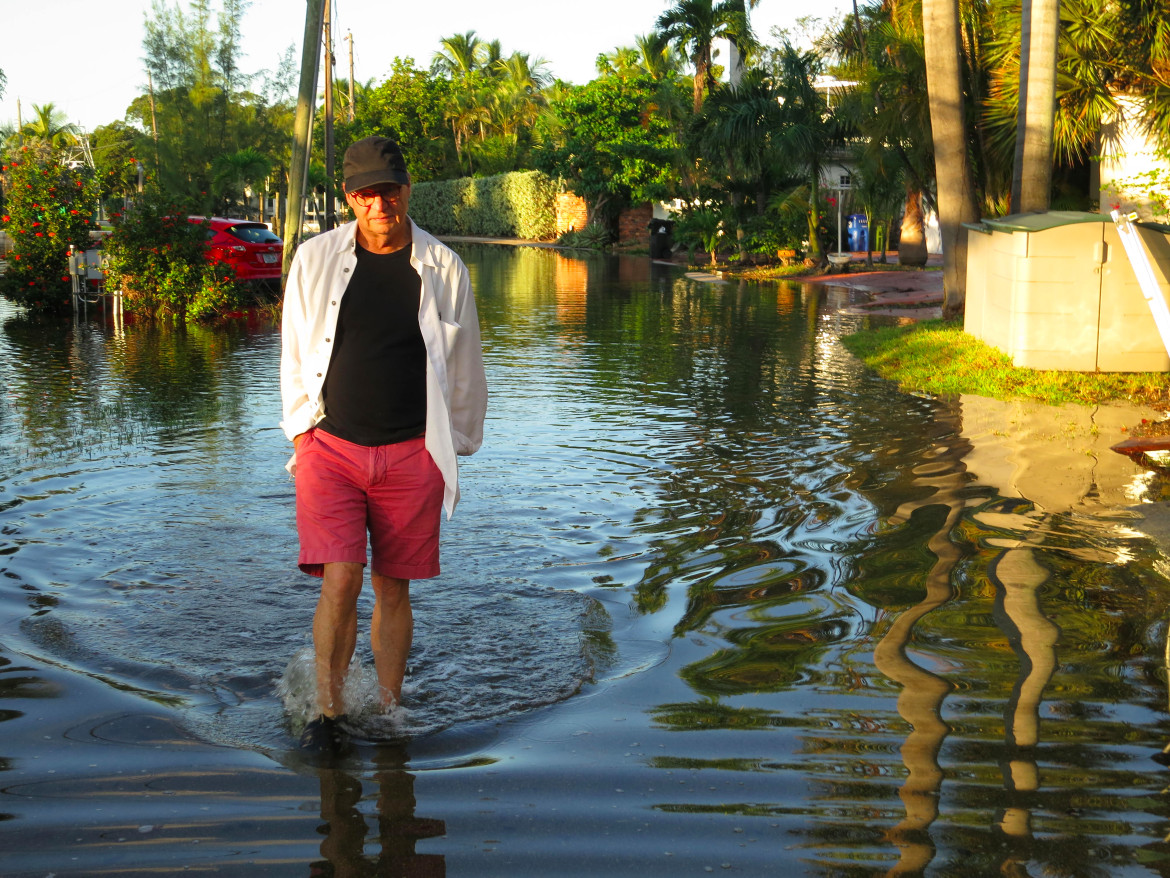 Chadwick walks down a flooded street in Fort Lauderdale, Fla., while reporting for Burn: An Energy Journal. (Photo: SoundVision Productions) 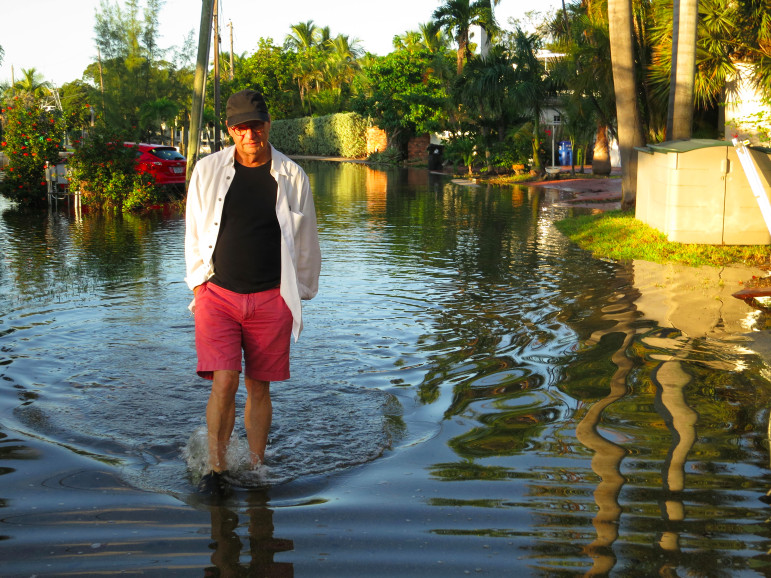 Chadwick walks down a flooded street in Fort Lauderdale, Fla., while reporting for Burn: An Energy Journal. (Photo: SoundVision Productions)

Alex Chadwick might not be alive today if it weren’t for a burnt sausage.

The pubradio veteran had some sausage cooking when, shortly after Thanksgiving in 2013, he fell down 15 stairs “face first” in his Marina del Rey, Calif., duplex and suffered a traumatic brain injury. Lying unconscious and bleeding from his head at the bottom of the stairs, Chadwick might not have been discovered if the sausage hadn’t burned and set off a smoke alarm.

“I remember feeling very faint and then trying to catch myself and then not being able to catch myself,” Chadwick told independent producer Scott Carrier in an interview recorded for Carrier’s Home of the Brave podcast. “And I remember how surprised I was that I couldn’t catch myself.”

When the fire department took Chadwick to St. John’s Hospital in nearby Santa Monica, brain scans revealed that he had sustained a traumatic injury to his frontal lobe, as well as internal bleeding.

“It wasn’t clear to me or anyone else that I was going to recover completely,” Chadwick told Current.

But 19 months after the ordeal, his neurologist says Chadwick has made a complete recovery.

“I’ve been lucky for much of my life and I was lucky again,” Chadwick said. “People don’t always get better from these kinds of injuries. So to walk away with really no damage, it’s a very happy outcome.”

At the time of the accident Chadwick had just finished hosting the fifth of five hourlong programs for Burn, a radio series about energy produced by Berkeley-based SoundVision Productions. Chadwick and several former NPR staffers were also raising money for a documentary series about World War I, an idea he had hatched with former NPR diplomatic correspondent Mike Shuster.

The Great War Project ultimately disbanded after failing to meet a $75,000 Kickstarter goal. But at the time of Chadwick’s fall, the collaborators were holding regular Tuesday-morning conference calls. Shuster, who lived a couple of blocks away from Chadwick in Marina del Ray, became alarmed after calling Chadwick before an upcoming conference call and not hearing back.

“That made me a little bit uneasy because he almost always called me back,” recalled Shuster.

“If you know anything about Alex, he always showed up and he was always super on time,” adds Bari Scott, SoundVision’s executive director. “I used to say to myself, ‘Is he a German or something like that?’”

On the Tuesday morning after the accident, Shuster rode his bicycle to Chadwick’s house and found the front door splintered by an ax and the tiny garden outside the apartment trampled.

Later that morning, Shuster tracked Chadwick down in the hospital, where Chadwick recognized him but couldn’t talk.

“He just looked awful,” Shuster said. “He looked like he had been beat up. His eyes were all puffy and purple. He was in really bad shape.”

“I just broke down in tears,” said another friend, Steve Proffitt, who served as senior producer for NPR’s Day to Day and worked alongside Chadwick for six years. “It was terrible. I just thought that Alex was gone.”

Chadwick thinks he mostly slept during his first week in the hospital. He remembers waking up one day and being greeted by his sisters who had come from Florida and Wyoming.

Chadwick’s public radio pals tried to maintain a constant presence at his bedside in the traumatic brain injury intensive-care unit during the first few days after they learned he was hospitalized. When Chadwick could talk at all, at times he couldn’t maintain a lengthy or coherent conversation.

Proffitt remembers Chadwick talking at length during one visit about his experience as a military interrogator in Vietnam. This made Proffitt confident that Chadwick’s memory was intact. But then Chadwick would say odd things. He mentioned some Russian license plates in his bag at home.

“You would think he was lucid and then he would say something that would worry you,” said Proffitt.

“He would lapse just into silence,” said Shuster. “His sort of sharpness took quite a long time to return — it was inch by inch.”

But over the two weeks he was hospitalized, Chadwick began to get his speech back. He spent another four weeks in two different rehabilitation facilities, undergoing a rehab program that included playing simple children’s games such as moving pieces around on a board. The games required an ability to remember rules and concentrate. At first, Chadwick had difficulty.

For a couple of months, “it wasn’t clear that he was going to be able to sit behind a microphone and read a script,” Proffitt said.

Chadwick found that he had to relearn work habits. For a while he had trouble reading lengthy texts, a crucial activity for his work on Burn, where he regularly pored over reports about energy issues. Such reading matter involved dense language and challenging concepts.

Chadwick saw a brain recovery specialist every two weeks for several months after the accident and continues periodic visits with a neurologist.

Chadwick was out of commission for six months. When he returned, he contributed a piece to a one-hour Earth Day special. He’s now working with SoundVision on developing stories to air on Marketplace.

Chadwick moved out of his Marina del Rey apartment to leave behind its narrow, slippery staircase. He now lives in Culver City, “right down the street” from NPR West, where he worked for six years on Day to Day. He said he is doing work for a social-media company in California but declined to go into detail.

Recent years have dealt Chadwick some serious blows, including the loss of his beloved wife Carolyn Jensen, the end of his job at NPR following 30 years of distinguished service, and the traumatic brain injury. And yet Chadwick considers himself lucky.

“Things haven’t always worked out for me, but they’ve often worked out,” said Chadwick. “I need to acknowledge that and hold on to it.”

“God bless him for being such an optimist,” Proffitt said, “because he’s had a lot of — not to be punnish — hard knocks.”