Starting in June, Nuzum will be s.v.p. of original content at Audible, the Amazon subsidiary based in Newark, N.J. 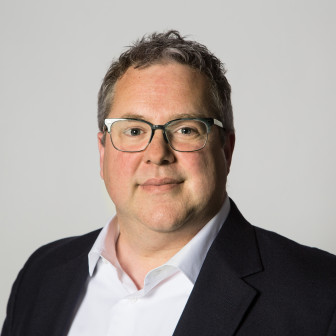 “I was offered a fantastic position in a company that shares a lot of my values, is doing really interesting things already and is planning on doing a lot more,” Nuzum told Current. “They handed me a blank canvas.”

Nuzum said Audible is looking to create a “third space” in the audio world. Currently, he said, audio is supported by ads or by donations from listeners. “We’ll aspire to be the place where top creators can come to do the top-shelf work they want to do,” Nuzum said. “There’s a lot of great work going on in podcasting, but for this to be successful, that has to be the floor.”

He predicts the service model will be similar to HBO, “with that same sense of quality and level of craft, a place where listeners are willing to pay for both creation and curation.”

In the announcement of Nuzum’s departure to NPR staff, Emma Carrasco, chief marketing officer and s.v.p. for audience development, said that throughout his 11 years at NPR, “Eric has led our acquired show portfolio to unprecedented growth and impact, both on radio and digitally. Ever a pioneer, he was an early innovator in podcasting at NPR and created a number of the podcasts that are pillars of NPR’s podcasting portfolio today.”

Since taking over programming in 2012, Nuzum “has revitalized NPR’s program development efforts,” Carrasco said, creating programs including the popular Invisibilia and working on the team that reimagined Here & Now.

“His list of accomplishments is long, and his imprint on NPR programming will be felt for years to come,” she added.

In a June 2012 piece for Current, Nuzum said new public radio shows “need several things if they are to grow and prosper: an intellectual spark, real talent giving them a unique, authentic voice, money, smart plans for development, and stations willing to take a small risk.”

He described why he adopted an experimental program-development approach — sort of a “permanent beta” — to Nieman Journalism Lab in April 2012.

“Historically,” Nuzum said, “the way that NPR and others in public radio have produced big programming is we come up with an idea we think is really good, we hire a staff, we keep all this very cloak-and-dagger secret, and then we try to make a big launch with it, and we end up with 30 stations and then over time more stations add to it. Using that process, it takes years to determine if something is going to be a hit or not. And that involves millions and millions of dollars.”

That process yielded TED Radio Hour, Ask Me Another and the limited series Cabinet of Wonders.

Nuzum, responsible for NPR’s non-news shows, has reported to Carrasco since October 2014. Previously he worked under Kinsey Wilson, executive v.p. and chief content officer, who left NPR that month. Nuzum also served under Margaret Low Smith, NPR’s longtime news s.v.p., when she was in his position.

Although his three bosses each had different backgrounds, Nuzum noted, “they all nurtured me in the same way: They knew how to take someone like me, with a million ideas, and help me think through things, question me, push me — without trying to make me into something I wasn’t.”

Nuzum admitted that he wrestled with the decision to leave a career he’s enjoyed since he was 19 years old. “Public radio and NPR have all the raw ingredients to make the success of the past pale in comparison to the success of the future,” Nuzum said. “I’m confident of that and proud of what we’ve done.”

Before rising to v.p., Nuzum directed programming and acquisitions. Earlier in his career he was program and operations director at WKSU at Kent State University in Ohio.

He is the author of three books, Parental Advisory: Music Censorship in America; The Dead Travel Fast: Stalking Vampires From Nosferatu to Count Chocula and Giving Up The Ghost: A Story about Friendship, 80s Rock, a Lost Scrap of Paper, and What It Means to Be Haunted.