Those experiments would involve both over-the-top and mobile platforms, according to the document. Mobile devices “now account for 86 percent of all PBS Kids digital video usage and 20 percent of PBSKIDS.org visits,” the budget said. “We expect this trend to continue at an even faster pace as new devices are introduced and networks begin to invest heavily in live streaming services.”

Other digital work includes an expansion of PBS’s presence on Internet-connected “over the top” viewing platforms for general audience and PBS Kids content. PBS plans to “strategically expand” as new OTT outlets become available, according to the document.

The budget also backs a new animated PBS Kids series from the Jim Henson Co. set to premiere in 2017. 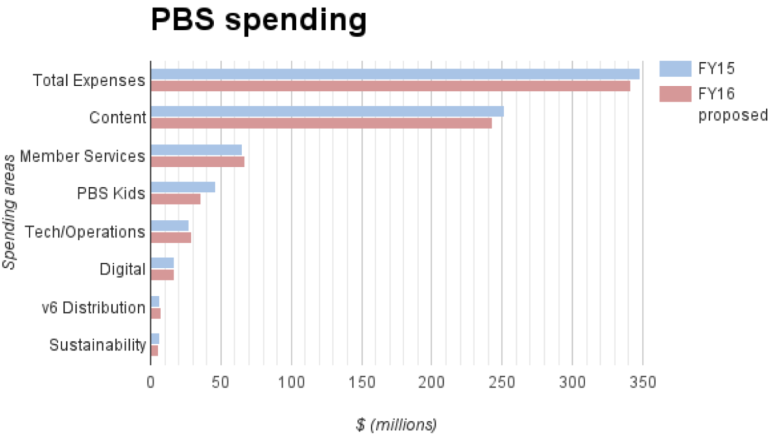 The forecast builds on “the collective momentum our system has created over the past few years while also strategically planning in an environment that is shifting in many ways,” PBS President Paula Kerger told general managers in an April 24 email.

That momentum includes an income surplus of $55.6 million from FY13 and FY14, thanks in part to the success of Downton Abbey. Of that, $27 million was invested in the following year’s budget, and $26.7 million set aside for future use.

For FY16, member stations will receive a 2.5 percent dues increase above this fiscal year for a total member assessment of $192.4 million. The extra $5 million generated through that hike will go toward general audience content.

Total spending for the content budget is $243.2 million, down 3.2 percent from last year’s $251.2 million. That decrease reflects discontinuation of the Program Challenge Fund, which ran from fiscal 1987 to fiscal 2014. PBS and CPB each previously supported with $9 million annually for limited prime-time series for the national public television schedule, such as the Mark Twain Awards and the Gershwin Award for Popular Music.

Instead of funneling that money through a specific fund, “CPB and PBS will work together throughout the year to identify and fund strategic projects,” the document noted.

PBS Digital continues to work on Member Video on Demand (MVOD), a development project that it will launch in beta at select stations this year. MVOD, which will allow station contributors access to a special cache of online video, would be apportioned $1 million in FY16. Overall digital spending, which also covers product development, LearningMedia, a redesign to enhance local content and branding on PBS.org and other initiatives, totals $17.2 million, up from $16.6 million this fiscal year.

The content budget for PBS Kids is $36.3 million for FY16, a 21 percent decrease from FY15’s $46.3 million. That drop reflects the production schedule of PBS Kids series and pipeline investments, the document notes.

The budget backs two new transmedia series, Nature Cat and Ready Jet Go, as well as development of a 2017 broadcast series from the Jim Henson Co. focusing on marine biodiversity. “Each adventure introduces viewers to a new marine species or ocean phenomenon,” according to the document. PBS Kids also gets money to promote three movie broadcast specials and enhance educational digital products.

Member service activities get $66.8 million, a $1.4 million increase over FY15. That goes toward fundraising training, professional development, the interconnection system and corporate communications and media relations.

Infrastructure spending will come from technology and operations’ $29.4 million for FY16. That budget includes $7.3 million for PBS’s major distribution upgrade, the upcoming broadband-based v6 interconnection system, up slightly from $6.9 million in FY15.

PBS is also planning a refresh of the Network Operations Center to replace PBS’s playout system, which sends broadcast-ready content to stations.

Station financial sustainability is supported by a $6.1 million budget, down slightly from $6.2 million last fiscal year, for creation of tools and training for planned giving, individual giving, corporate support and on-air fundraising, as well as regional meetings and other professional development.

On the funding side, revenue-generating activities of $9.9 million are down slightly from FY15, mainly due to a falloff in cash generated by PBS video and mobile apps. But net income from PBSd, which handles Downton Abbey distribution contracts, grew $3.1 million from FY15, to $28.1 million.

The PBS Board will finalize the draft budget at its June meeting.