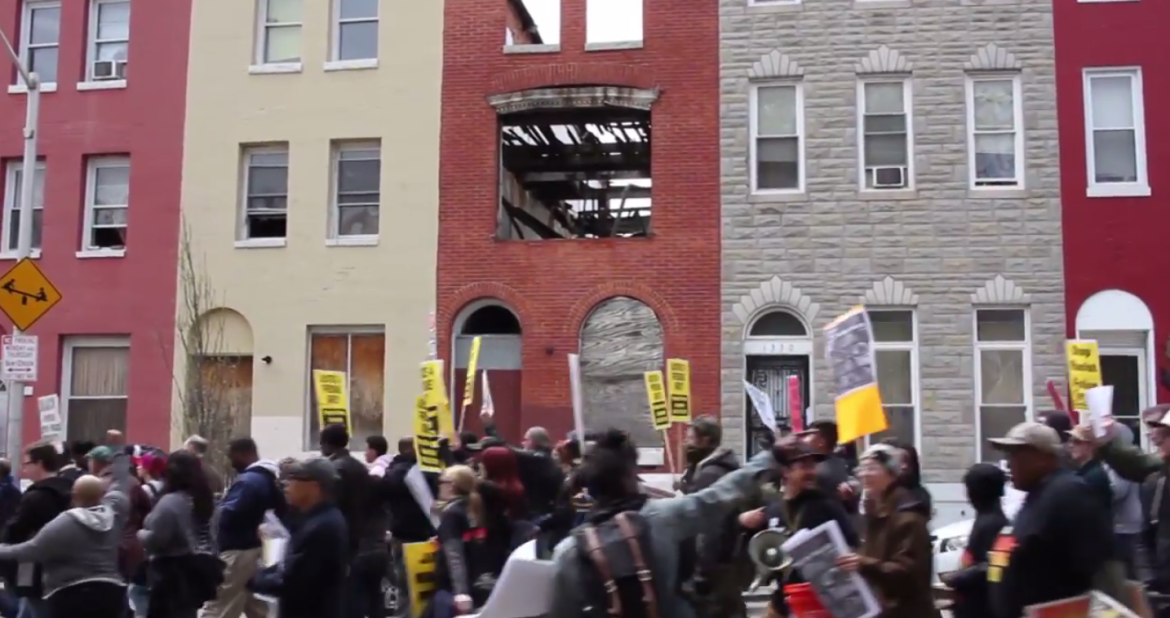 Screenshot of Baltimore protests from a WEAA video

On Tuesday morning, the day after protests and riots left Baltimore burned and broken, Carla Wills stopped by “ground zero” where the unrest began and found young people in the streets.

But they weren’t rioting. They had rakes and bags to clean up not only the mess made by the riots, but also parks and alleys that had long been neglected in the neighborhood.

“There’s only so much destruction you can do to something that was already destroyed a long time ago,” said Wills, executive producer of news and public affairs at WEAA-FM in Baltimore.

The small dual-format station housed on the campus of Morgan State University has been covering the Freddie Gray story and its aftermath pretty much “wall-to-wall” on its public affairs programs, she said. Beverly Burke, a morning news anchor at the station, was on the scene of the riots talking to people before police arrived, according to Wills.

The station is also trying to take advantage of university resources via a student-reporting program that it started this semester. Students tipped off station staff about Instagram posts that mentioned where riots would occur and were able to discuss the posts on the air. Another student, a broadcast major at the university, called into WEAA’s First Edition show to report from the scene.

“We’re doing a lot with not a whole lot of resources and people,” Wills said.

And listeners were tuning in. Listeners maxed out WEAA’s web stream Monday, even after the station boosted its capacity.

“We got a few calls from listeners where they indicated their appreciation for what we were doing because they felt like they weren’t getting this kind of coverage anywhere else,” Wills said.

Meanwhile, at that station, the situation was “frantic” Tuesday, said News Director Joel McCord. “There’s so much stuff going on,” McCord said. Reporters appeared on NPR while also trying to file stories for the national feeds of the network’s newsmagazines, McCord said.

“We sort of pick and choose” what’s most important, McCord said. Press conferences, for example, can be recorded “from somebody’s live stream. I’d like to get real stories of people that have been affected.”

Some “irate” listeners (and Twitter users) wondered “why we aren’t going wall-to-wall with our coverage like the local TV stations,” McCord said. “And why doesn’t NPR step out of the way so we can do that.”

Thanks for the smooth jazz @WYPR881FM -you may wanna look out your window when you have a moment .

“As if we actually had that many reporters and that much money,” McCord said. The station has four reporters on staff.

Both McCord and Wills said that none of their reporters was harmed during the unrest, though many journalists from other outlets, or their equipment, were subject to violence.

“We did have a producer get trapped between two sets of police lines late yesterday as she was trying to make her way back to the station,” he said. “But she finally got home last night.”