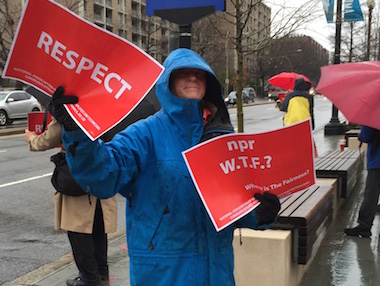 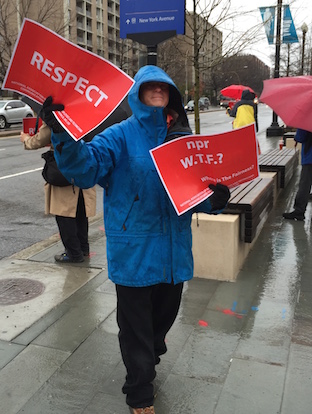 The union that represents NPR’s engineers and audio technicians is pushing back against contract proposals made by the network in negotiations last week.

The National Association of Broadcast Engineers and Technicians–Communications Workers of America and NPR started negotiating last Monday over a contract that will apply to 55 network employees — roughly 7 percent of NPR’s workforce. The five-year contract currently in effect will expire Wednesday if no agreement is reached.

NABET-CWA says NPR’s proposals would reduce employees’ benefits and make it easier for management to fire employees. Negotiations aren’t going well so far, said Carrie Biggs-Adams, a staff representative for NABET-CWA. “They should be further along, and I would feel better if there was a better attitude about it from the part of NPR,” she said.

NPR spokesperson Isabel Lara declined to comment on specifics of the network’s proposals. “We are still in negotiations and have confidence that we will reach a mutually satisfactory agreement,” she said.

Biggs-Adams cited several sticking points, including a network proposal to eliminate a no-layoff provision agreed to in 2010. At the time, NABET-CWA accepted that provision in exchange for allowing nonunion NPR employees to operate equipment and mix audio.

NPR has also proposed ending a health-care bargaining process under which representatives of NPR’s two unions, nonunion employees and NPR management work together each year to determine benefits.

A third proposal would give NPR management broader discretion to terminate workers, with no option for arbitration. Employees would receive severance pay only if they sign releases relinquishing their right to sue the company for wrongful termination. And a “performance improvement plan” would allow NPR to fire an employee for half of severance and without arbitration 45 days after delivering the employee a written notice asking for improved work.

A dozen members and supporters of NABET-CWA protested the proposed contract in the rain outside NPR’s headquarters March 27.

Stacey Abbott, an audio engineer who has worked at NPR for 26 years, said she’s concerned that the proposed contract would hurt the network’s culture and its longtime workers.

Management has “come with different corporate ideas and different experiences from the corporations they’ve been in . . . and they’re going to negotiate us into other company’s boxes,” she said. “And then they’re going to leave NPR with the next administration that comes through.”

NABET-CWA appealed to NPR President Jarl Mohn in an open letter. “The engineers and technicians who do NPR’s technical work deserve respect for their energy and contributions — those today, those in the past, and those in the future — to the sound and the product that is NPR,” the letter said. More than 125 NPR employees signed it, according to Biggs-Adams.

The engineers hope that Mohn’s broadcast experience will inspire him to stand up for them. “We want to get his attention so that he can then tell the people down at the negotiating level, ‘Hey, straighten up. Show some respect,’” Abbott said.

Negotiations resumed Monday and continue until an agreement is reached. NABET-CWA is not ruling out a possible strike vote, Biggs-Adams said.