An initiative launched by NPR in January to boost listenership for Morning Edition is already starting to bear fruit, according to network CEO Jarl Mohn, who discussed the results Feb. 21 at the Public Media Summit in Washington, D.C. 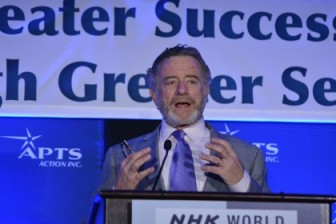 Speaking to a crowd of executives from public television stations and joint licensees, Mohn pointed to five stations that saw gains in their Nielsen Portable People Meter ratings for January: WAMU in Washington, D.C.; KQED in San Francisco; KPCC in Pasadena, Calif.; WBEZ in Chicago; and ideastream’s WCPN in Cleveland.

During the first 28 days of the Spark Initiative, Mohn said, the AQH share at WCPN increased by 63 percent. He also cited KQED’s 12 percent growth during morning drive: The San Francisco station’s AQH share increased from 4.1 to 4.6.

A second phase scheduled for July and extending through December will focus on promotion of All Things Considered. Goosing listenership for the flagship newsmagazines, Mohn said, will help NPR and stations secure underwriting.

“Our tentpoles are Morning Edition and All Things Considered,” Mohn said. “If we don’t have those two things right, nothing else matters.”

There’s no better time for public radio to stick to the basics and focus on journalism, its primary strength, Mohn said.

“That,” he added, “is why what we do in public radio is more important than ever before.”

In Chicago and Cleveland, the recent AQH growth extended a longer-running trend of pubradio listenership.

From the end of December to the end of January, its morning drive AQH share went from 2.0 to 3.0. But the audience declines that typically occur during the holidays skewed the month-to-month comparison, Calhoun noted. Leading into the holidays, WBEZ’s morning drive share was 2.9, so growth in January was more modest than the NPR chief’s numbers implied.

Nevertheless, rebounding from the holiday dip to hit a 3.0 by January’s end was a big deal for WBEZ, Calhoun said. The station joined the top 10 rankings of Chicago’s highest-rated stations for the first time.

“As you can imagine, we’ve been really gratified by that growth,” Calhoun said in an email. “Our latest book shows significant gains pretty much across the board — including upticks in morning and in afternoon drive — and sizable increases for our morning talk show. It makes us feel like we’re doing our job for our listeners.”

While WCPN has been gaining strength for some time, Jackson said, the “significant” jump that followed the Spark promotions suggests that the initiative also helped to boost listening.

“We have been trending up since 2013,” Jackson said, “but this is a bigger increase for us. All the indicators are saying, ‘Yes, Spark is making a change for the better.’”

Calhoun also endorsed the benefits of Spark for WBEZ. “We’ve been growing audience across almost all day parts — which would imply we’re looking at something more overarching,” he said. “That said, we still feel Spark is a good idea. It dovetails very organically with where our efforts are focused, and we’re glad to be shoulder-to-shoulder with NPR in emphasizing this really important day part.”