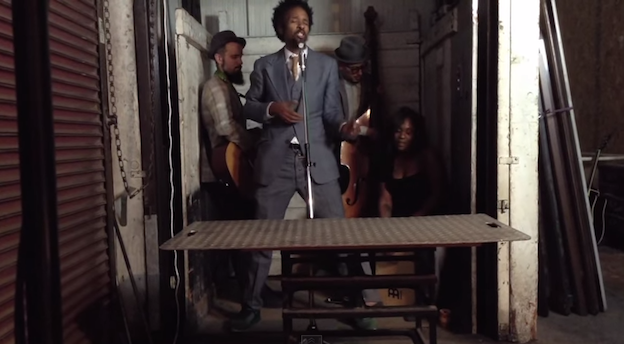 A screenshot from the video that won NPR's Tiny Desk Concert contest.

A screenshot from the video that won NPR’s Tiny Desk Concert contest.

When NPR Music announced its first Tiny Desk Concert contest in December, Bob Boilen knew that he would be watching a lot of music videos in January.

“I figured 1,500 [videos would be submitted],” Boilen, the creator and host of NPR’s All Songs Considered, told Current. “I figured I could watch 1,500 videos, so I made that number up in my head. I could do that in three or four weeks worth of watching, light math in my head. I could stay up until one in the morning to watch them.”

He was right — until “thousands upon thousands” of new submissions came in on the final weekend and the final day that submissions were accepted. The contest encouraged musicians without recording contracts to record an original song around a desk and upload the video to YouTube.

“Every musician on the planet is a procrastinator — that’s the nature of that beast,” Boilen said.

After weeks of watching thousands of videos, ranking bands on spreadsheets and discussing the merits of their favorite videos, the judges announced the winner of NPR’s Tiny Desk Concert contest. Fantastic Negrito, a project of Oakland, Calif.–based Xavier Dphrepaulezz, was selected from nearly 7,000 submissions.

“I think it was the middle of a week. It was probably 11:30 at night for me,” Boilen said. “I’d probably watched, from morning until night, probably 500 videos that day. And when the Fantastic Negrito came on it blew me away. . . . His soul is just right there. . . . His music is universal, which is why all the judges seemed to be attracted to him.”

The band will perform an official Tiny Desk Concert that will be released in March and also scored a slot at “CouchTrippin’ To Austin,” a music showcase March 18 in Austin, Texas, sponsored by Lagunitas Brewing Company.

Here’s the winning video, shot in a freight elevator in Oakland, Calif., with a desk made of a steel slab:

Lead singer Dphrepaulezz boasts a soulful sound and an attention-grabbing backstory. In the ’90s, he recorded an album that “failed to take off,” according to NPR’s announcement. After that release, he nearly died in a car accident that left him in a coma and required intense rehabilitation.

“Now, renewed creative energy has spawned the musical project Fantastic Negrito,” the release says. “He chose the name, he says, as ‘a celebration of blackness. The “Fantastic” is self-explanatory; the “Negrito” is a way to open blackness up to everyone, making it playful and international.’”

While there was only one winner for the contest, other bands that participated may be invited to future events around the country.

“We could simply dig this pile for the next year and have a number of great events and showcase brand-new talent,” Boilen said.

With entries from all 50 states, Anya Grundmann, executive director of NPR Music, said that she’s looking to incorporate some of these bands into events with member stations.

“We’re going to talk to the stations about it,” Grundmann said. “I think the first word that comes up is ‘party.’ But some kind of music showcase or some kind of workshops, maybe, or do some kind of Tiny Desk open mic, house party. There are so many possibilities that I think we’ll figure it out. I know that stations we’re talking to right now are very excited about figuring something out.”

“We’re in the process of examining where we really want to place our bets with NPR Music. I’m encouraged by the leadership of NPR Music and the people in that group who have done some wildly creative things. They’ve gotten a lot of buzz and word-of-mouth promotion.

The Tiny Desk Concerts are a thing of beauty; they are remarkable.”

When asked whether NPR will hold another Tiny Desk Concert contest, Boilen said half-jokingly, “I have 7,400 unread emails.”