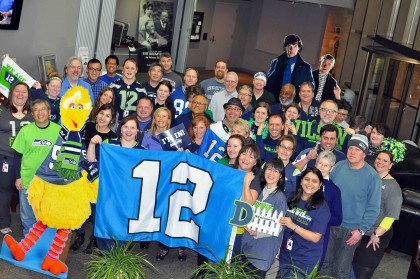 The staff of KCTS in Seattle is ready for the big game. (Photo: Hilda Cullen, KCTS)

The staff of KCTS in Seattle is ready for the big game. But Michael Raia of Boston’s WGBH notes that “Sherlock and John Watson are misrepresented as Seahawks fans in this photo,” because they are Masterpiece/WGBH colleagues. (Photo: Hilda Cullen, KCTS)

A friendly Super Bowl wager between the top executives of public television stations in Boston and Seattle will yield one a booty of seafood after Sunday’s game.

“I graciously accept Rob’s bet,” Abbott said in an official announcement trumpeting the wager, “and look forward to preparing a plate of Pacific Northwest salmon for my friends and colleagues after the Patriots bring their fourth Lombardi Trophy back to New England.”

Dunlop countered: “We expect the roar of the 12th Man to reach all the way to Boston this Sunday, and we’re whetting our appetites for some northeastern lobster!”

The NFL Super Bowl XLIX kicks off at 6:30 p.m. Sunday on NBC from the University of Phoenix Stadium in Glendale, Ariz.