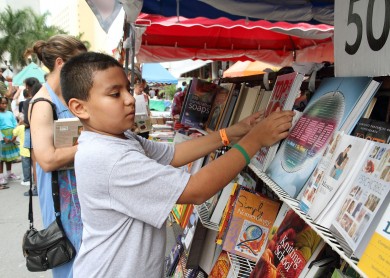 For the first time, news from this week’s Miami Book Fair International — which hosts more than 450 authors, 250 publishers and about 200,000 attendees — will stream live on PBS.org, member station websites and WorldChannel.org.

Coverage Nov. 21-23 will be produced by Detroit Public Television, with a grant from the Knight Foundation, marking PBS’s first major coverage of a live book and author event.

Executive Producer Rich Fahle, a Detroit native with roots in publishing, approached DPTV with the idea to cover the fair, said Della Cassia, station spokesperson. “PBS loved it,” Cassia said, “and so did the Knight Foundation and Miami Dade College,” which founded the event in 1984. The station is also collaborating with WPBT-TV in Miami.

Scheduled segments include talks with authors Richard Ford (Independence Day), Judy Blume (Are You There, God? It’s Me, Margaret) and Walter Isaacson (Steve Jobs); poet Mark Strand; television writer Norman Lear (All in the Family); and author and musician Questlove.

Online visitors can watch a daily live stream of interviews, panels and on-the-street segments for book lovers. Content will be archived and available for later viewing on PBS.org, station websites, PBS apps and YouTube.

The live webcast will air from 4-9 p.m. Eastern time Nov. 21 and noon to 6 p.m. Nov. 22 and 23. Bloggers, bookstores, publishers and media outlets can also embed a player on their own sites.

“This is a great example of the national-local partner mindset that has been growing over the past several years across public media,” Cassia said. “We are producing the coverage and giving it to all PBS stations and others who want it.”