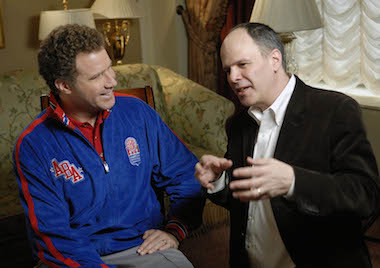 The leadership change was the first in the series’ 28-year run, providing an opening to reassess its editorial lens, said Stephen Segaller, programming v.p. at producing station WNET in New York. “It’s incumbent on us to maintain the quality of the brand,” he said. “But it’s also essential and an opportunity to think at every fork in the road, especially with a new executive producer: What can we do that’s different and even better than what we’ve done before?”

Comedian Will Ferrell and Kantor talk during filming of Make ‘Em Laugh, a six-part miniseries that Kantor produced for WNET as an independent. As e.p. of American Masters, he is rethinking how producers approach biographical subjects and who qualifies for the label of “master.” (Photo: Joseph Sinnott, WNET)

During the series’ nearly three decades on PBS, its films have won 28 Emmys, 12 Peabodys, three Grammys and an Oscar.

Kantor, an award-winning producer who previously specialized in films on American musical theater, is pursuing plans to build on that track record while expanding the number of new episodes each year from eight to 10. He also intends break old rules about who could or should be subjects of profiles.

In studying the series before he was hired, Kantor was struck by the 2013 film on tennis great Billie Jean King. Up until then, the series had never profiled a sports star.

“It was an extraordinary profile, a great film,” Kantor said. “But it was really as much about the rise of feminism as it was about Billie Jean King.” Similarly, he noticed a rare episode about a journalist, former CBS anchor Walter Cronkite; the 2006 film was part traditional biography and part examination of media under the cultural microscope.

“I want to continue to explore those stories that have more to do with cultural leaders than artistic leaders,” Kantor said.

In reaching beyond the series’ traditional framework of biographies that chronicle the lives of its subjects from beginning to end, Kantor is developing episodes that focus on specific cultural trends and accomplishments, including some that spotlight several individuals in the same episode.

Lacy, who left WNET last year to direct documentaries as an independent producer, planted seeds for some of these changes. Nearly all of the 200-plus documentaries produced during her tenure focused on individual artists and their accomplishments, but a handful were framed as topical treatments. “Actors Studio”, a 1997 documentary on the New York institution that taught Method acting and provided a venue for famous actors and playwrights to refine their craft, was the first of these. Documentaries on Sun Records (2002), Atlantic Records (2007) and “Hollywood Chinese” (2009), on Chinese-American cinematic history, also followed this approach.

This year, American Masters stretched further into this storytelling form with “A Fierce Green Fire,” an Earth Day special that documented 50 years of the environmental movement, and “The Boomer List,” examining the cultural contributions of 19 famous boomers.

While traditional biographies are the series’ signature, the cradle-to-grave formula is not the only way to frame the subject, Segaller said. And it can limit the topics that the series can tackle.

“There are people who are hugely influential today who are still alive and still working, and who either aren’t interested in being portrayed in a cradle-to-grave way or they’re too busy to participate,” Segaller said. “We’d like to do more films that are not so much chronological narratives but more what we might call ‘process films.’”

For example, he said, a filmmaker for American Masters might arrange to shoot a legendary rock star about to cut a new album and go on tour. “Why not portray them through the prism of one month in their life when they’re doing that new album or tour?” he asked.

Or, Segaller added, American Masters could work with a photographer or a painter setting up a new exhibit and use the event to focus on a relevant period of their careers.

This openness to different story treatments is a welcome change to Michael Lumpkin, executive director of the Los Angeles–based International Documentary Association. “The more opportunities there are for documentary programs and documentary filmmakers the better,” he said. Any expansion of editorial boundaries of American Masters “would be of huge benefit to the documentary community.”

With his wider lens, Kantor promises a continued emphasis on diversity. “I want to make sure that the focus of the series remains as broad and all-encompassing and, in a way, welcoming as it’s always been. If not more,” he said.

Kantor cites pending grant applications to the National Endowment for the Humanities for films on entertainer Sammy Davis Jr. and author William Faulkner as progress in this direction. “This represents different areas of American culture artistically and geographically, and very different aspects of the voice of America.”

NEH has already backed projects on Edgar Allan Poe and dramatist Lorraine Hansberry; before Kantor arrived, producers had secured grant funding for a profile of Helen Keller. “When you think diversity, you don’t necessarily think of Helen Keller, but that’s a story we grew up with but my kids didn’t. I think it’s important to introduce new generations to her story,” Kantor said.

Ambitions to boost the series’ output to 10 episodes depend on Kantor’s success in bringing in additional funds. The expanded footprint could potentially bring documentaries on science and technology to PBS next year, according to Segaller. In a typical season, American Masters delivers eight new episodes and four reruns.

Kantor sees his role as a rainmaker — with funders old and new — as a big part of his job. “It’s real important to reach out to any and all potential funders to try and find the right fit, whether it’s government entities like the National Endowment for the Arts or National Endowment for the Humanities or a charitable trust that lets you match their planned giving with your goals for the series,” Kantor said.

“Personally, I’ve had great success with the NEH and hope that we can partner with them as much as possible because they tend to champion programs and series with new research, high levels of scholarship and, to my mind, entertainment value,” Kantor said.

NEA funding, which declined sharply in 2012, is up slightly for next year, Kantor said. Regardless, he added, “we are always seeking new sources of funding.”

In addition to traditional funding sources, Kantor is actively cultivating both domestic and foreign distribution deals. “As important as fundraising is on one end, presales is essentially part of the same prospect,” he said.

Initially trained as a theater director, Kantor’s production credits include “Broadway Musicals: A Jewish Legacy,” the Peabody-winning episode of Great Performances from 2014; two major PBS miniseries, Broadway: The American Musical and Make ’Em Laugh: The Funny Business of America; and a 2001 American Masters profile of Quincy Jones. Earlier in his filmmaking career, he produced for Egg: The Arts Show, a local WNET series that had a brief national run, and contributed to separate documentary films of Ken Burns and Ric Burns.

Now he is working on new ways to determine who fits the bill as an American “master” and to overcome the resistance of some of the most obvious choices who are missing from the series library.

A new episode on Bing Crosby in December, for example, may remind viewers that there’s never been a biography of Crosby’s famous cinematic costar, Bob Hope. Nor has Frank Sinatra, arguably America’s most acclaimed singer, been profiled. In both cases — and others — it’s not for lack of trying. Efforts to make a Sinatra film have been complicated by the need to secure rights from the singer’s estate and competition from other filmmakers, Segaller said.

As for Hope, the situation is a little more, well, hopeful. “I’m aware of a biography of Bob Hope that is to be published next year,” he added. “That may provide us with an opportunity, but I can’t say anything more specific than that.”

Unlike his predecessor, Susan Lacy, who kept lists of those artists she intended to turn into subjects for American Masters, Kantor has a different system. He applies the framework that documentarian Ken Burns uses to define his subjects.

“What Ken has always asked is, ‘Who are we as Americans? What does my film say in terms of our American character?’ I’m posing that question with regard to artists and other cultural leaders,” Kantor said.

“For me, it’s not about, ‘Who’s the most famous?’ so much as, ‘What’s the right mix of stories to tell?’ and ‘Who’s available to do those process films?’” Kantor said.

“I hope to be the person that filmmakers trust with their life’s work,” Kantor said. “I hope to continue to earn that trust. For me, it’s about the best idea winning. It’s about the most emotional and evocative film that can be made.”