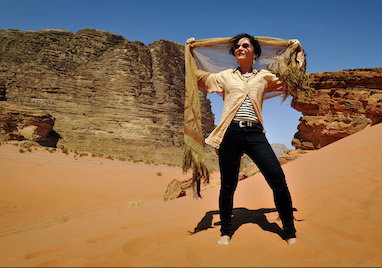 With a podcast about fashion, “the idea that I could own something and monetize something is pretty fetching,” says Lyden, shown here in Jordan in 2011. (Photo: Bill O’Leary)

When Jacki Lyden joined NPR’s Chicago bureau in 1979 as a freelance reporter, she produced memorable pieces about the advice-columnist mother of a rock star and a bank robbery that shocked residents of a small town in northern Illinois.

Now, after a 35-year career with the network, Lyden has resumed freelancing; this time, she is directing her longtime fascination with fashion into The Seams, a reporting series that began airing early this year on Morning Edition and Weekend Edition. As an independent producer, she’s preparing to develop it into a podcast, to be funded in part through a Kickstarter campaign.

Count Lyden among the NPR reporters and hosts with unique voices who left as the network shed jobs and restructured to bring its budget back into the black over the past several years. NPR management eliminated Lyden’s staff position as a Weekend All Things Considered substitute host in a 2008 downsizing, but she continued on a temporary basis. By June 2009 she was on contract as a contributing host and correspondent. But that contract expired March 15 and was not renewed.

Though many noteworthy on-air talents and staffers who worked behind the scenes have also left the building, longtime colleagues lamented Lyden’s departure to Current. One staff reporter who has also spent 30 years at NPR says of the decision to drop her contract, “They just didn’t make room for her, and they should have, because she’s a unique and beautiful voice.” The reporter requested anonymity in order to speak freely.

Weekend Edition Saturday host Scott Simon, who also came up through NPR’s Chicago bureau, called Lyden “among the most talented people that have ever been on NPR. All of her fine reporting is, to my mind, the product of the effervescence that is Jacki.”

Lyden admits to being “a bit disappointed” about being let go, but she is quick to put a positive spin on the career change.

“Having been in the public domain for all these years, the idea that I could own something and monetize something is pretty fetching,” she said.

With The Seams, Lyden is channeling her inner fashionista and journalistic ambitions into podcasting, a medium that is burgeoning with public radio talents who are striking out on their own, either by choice or circumstance.

Lyden’s passion for fashion dates back to her childhood. She sewed her own clothes in high school and college; among her longtime NPR colleagues, she is known as a classy dresser with a penchant for vintage garments.

“I enjoy the theater of getting dressed in the morning. I’m the daughter of a runway model, and I like to get dressed,” she said. Lyden enlisted her personal seamstress and her former milliner to help get the podcast off the ground.

For The Seams, Lyden pitches a public radio angle on the fashion beat. “What we’ll be able to do is give voice and legitimacy and intellectual inquiry to a lot of people [in the fashion world] who really haven’t had that before,” she said. “What The Seams can do is rescue fashion from this notion of frivolity and rank consumerism.”

“There’s tremendous popular interest in fashion, but it’s been ghettoized in the media,” said Valerie Steele, who runs the Fashion Institute of Technology museum in New York and consults with Lyden on stories. “It’s covered in a limited way, focusing on trends, spectacle and the lifestyles of the designers. Jacki is aware that there are many more things to focus on.”

A former colleague from Lyden’s years in the Chicago bureau recalls that even as a young reporter she brought a unique sensibility to her assignments. Lyden joined the bureau after working at a Chicago rock radio station, said Jon “Smokey” Baer, an ATC associate producer who worked in NPR’s Chicago bureau in its early years. “She wasn’t at Scott Simon’s level at the very beginning. But she was a natural. She picked up [the NPR style] right away. She knew what we were about.”

Baer recalls two of her signature early stories: a piece on Marion Dorothy Nugent, mother to rock guitarist Ted Nugent and author of an advice column, and a crime story about how the pillar of a small Illinois town was killed by police after robbing a bank.

Looking ahead to creating new work, Lyden plans to use proceeds from her Kickstarter campaign to hire several NPR alums, including editor Deborah George, to work on her podcast. Even if the campaign doesn’t hit its goal of nearly $50,000, she will continue producing stories for NPR as a freelancer, approaching fashion as history, sociology and anthropology.

Lyden plans to deliver a story on the zoot suit riots in Los Angeles during World War II, in which fights broke out between white servicemen and Latino youths, who wore zoot suits with broad shoulders, narrow waists and ballooned pant legs. Also in the works is a piece about the Nigerian-born photographer Ike Ude, who views dressing as artistic expression and part of his practice as an artist.

Meanwhile, another possible feature is in the works — that is, a feature film. Lyden’s memoir about her colorful mother, Daughter of the Queen of Sheba, has been turned into a screenplay, and several prominent movie stars have expressed interest in portraying Lyden on the silver screen.

“Any number of big names from Hollywood have been attached to the movie,” said Scott Simon, “and each time a new name is mentioned I turn to my wife and say, ‘I don’t think they’re interesting enough.’”

Correction: An earlier version of this story misstated the location of the town where the bank robbery occurred that Lyden covered.
ShareTweet EmailPrint More