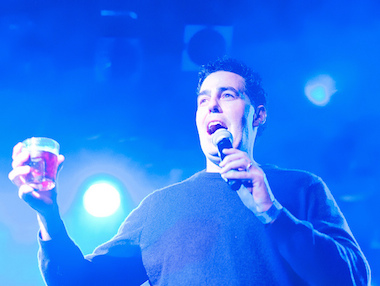 Comedian and podcaster Adam Carolla performs at The Roxy in West Hollywood, Calif. Carolla settled with Personal Audio after more than a year of legal wrangling. (Photo: Eric Neitzel, Flickr via Creative Commons)

Podcaster Adam Carolla has reached a settlement with Personal Audio, a company that has sued podcasters based on claims that it owns a key patent related to podcasting.

The settlement comes after more than a year of litigation, with Carolla and the Electronic Frontier Foundation crowdfunding legal fees to challenge Personal Audio’s patent claim in court. It also marks a turning point in Personal Audio’s dealings with podcasters, including public broadcasters, whom it accuses of violating its patent.

In July, Personal Audio announced that it had settled with HowStuffWorks and Togi Net, other podcasters whom it had challenged. The company also asserted that it had attempted to reach a settlement with Carolla.

The comedian turned down their request because doing so would have denied him the opportunity to invalidate Personal Audio’s claim to podcasting technology in court, leaving the company able to sue other podcasters in the future, he told Mashable.

But Carolla and Personal Audio then filed a joint motion Aug. 12 to dismiss their lawsuit. Both parties have agreed to a “quiet period” until Sept. 30, during which time they will not disclose the terms of the settlement. Though the settlement and public statements will make it more difficult for Personal Audio to justify suing future podcasters, the company will no longer have to demonstrate to Corolla that its patent claim is valid, according to the Electronic Frontier Foundation, a nonprofit digital-rights advocacy group that has supported podcasters in disputes with the company.

“I’m a little disappointed that they didn’t get the chance to invalidate the patent,” said Daniel Nazer, an EFF staff attorney and the foundation’s Mark Cuban Chair for Eliminating Stupid Patents. “But I do understand that trial is really expensive, and it’s a challenge.”

Personal Audio further explained its change in approach in an Aug. 19 press release. The company said it “has no intention of suing podcasters that are making modest amounts of money from podcasting,” having realized that independent podcasters earn little profit. The company singled out six podcasters in particular whom it will not target, including Marc Maron, whose WTF podcast is distributed to public radio stations by Public Radio Exchange.

Personal Audio has previously sent threatening letters to at least two other individuals with connections to pubcasting who were not named in its recent release: Jesse Thorn, whose Bullseye program is distributed by NPR, and Steven Levitt, whose book Freakonomics inspired WNYC and American Public Media’s radio show and podcast Freakonomics Radio, which he occasionally hosts.

Personal Audio’s attorney did not return requests for comment.

The settlement with Carolla is not the end of Personal Audio’s legal efforts. The company will go to trial against CBS, NBC and Fox in September over whether its patent applies to video as well as audio content. The TV companies could invalidate Personal Audio’s claim to podcasting technology if they elect to fight the patent’s merits in court.

EFF’s challenge to the patent continues, with a hearing scheduled for December before the Patent Trial and Appeal Board of the U.S. Patent and Trademark Office. The office is expected to deliver a ruling by April 2015. To help fight its case, last year EFF solicited examples of technology similar to podcasting in use prior to Personal Audio’s 1996 patent filing.