As Kasell appeared in his final episode with the news quiz program, the audience continually interrupted the taping with wild bursts of applause whenever anyone said his name. “I adore you, Carl Kasell,” one call-in contestant said. The episode will air the weekend of May 17-18 on NPR member stations.

At one point, audience enthusiasm for the 80-year-old North Carolina native was so loud that panelist Mo Rocca quipped, “If you clap loud enough, he’ll never go away.”

The crowd gave Kasell a standing ovation when he walked onto the set with host Peter Sagal, blowing kisses at the audience. Though Kasell spent 30 years as the straight-laced news announcer for NPR’s Morning Edition, joining Wait Wait at the program’s inception allowed Kasell to show off his fun-loving nature, Sagal said.

“That other side of Carl was always there,” Sagal said. “Pure, Grade-A, North Carolina ham.” 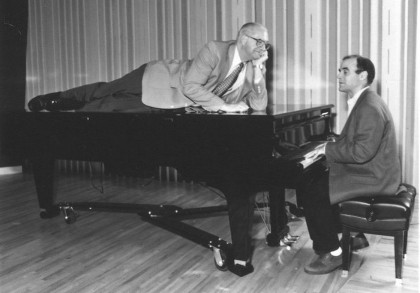 Kasell and Sagal were goofing around from the show’s inception, as this 1998 publicity shot proves.

Kasell has participated in Wait Wait since its 1998 origins. Public radio producer Doug Berman developed the comedy news quiz program for national distribution with Chicago’s WBEZ, following up on earlier success at Boston’s WBUR with Car Talk. From the quiz show’s early days, producers poked fun at Kasell’s image as a serious newsman.

Prior to Kasell’s retirement send-off, the show had invited fans to leave congratulatory messages on an NPR call-in number – a twist on Wait Wait’s grand prize of personalized voice-mail messages recorded by Kasell on a quiz winners’ answering machines. During the taping, the tables turned on this familiar feature of the show when producers played messages left by Kasell’s more famous well-wishers, including the president, who praised the program’s Chicago heritage.

“I will never forget my time on the show,” said Obama, who appeared on Wait Wait in 2005 when he was serving as a U.S. Senator from Illinois. “A lot of people didn’t know my name, but you guys were already making fun of it,” he said.

TV and film celebrities who also offered Kasell their congratulations included Stephen Colbert, Tom Hanks and Katie Couric, who began her broadcasting career when Kasell hired her as an intern at a commercial radio station in Virginia.

Though Kasell is stepping back from production of Wait, Wait, he will serve as “scorekeeper emeritus” and continue to record messages on winners’ answering machines. His successor has not yet been announced.

After the show, fans shared their affection for Kasell. One couple spoke about how they had gotten engaged at a 2006 taping of the program. Another audience member shared a performance poem she had written about being black in New England that incorporated Kasell: “I’m black enough to want Carl Kasell’s voice on my answering machine,” she recited in one line.

Every seat at the Warner Theatre came adorned with a Wait Wait tote bag featuring Kasell’s face, and fans brought Kasell plush dolls for him to sign after the program – a signifier of how important the newsman’s image has become to NPR’s merchandising line over the years. Additional Kasell swag available from the NPR Shop includes a pillow in the shape of his head and an alarm clock featuring wake-up messages from him and Sagal.

“I just want to say thank you to my friend, who has been and always will be the heart and soul, and of course the voice, of this radio show,” Sagal said in the program’s closing minutes.

Through the event Kasell himself remained soft-spoken, sticking to the script, foregoing any good-bye speeches. His parting words on the show were “This is NPR.”

But during the panelists’ sign-offs, Rocca offered a guess as to where Kasell might go next: “Doug Berman will produce a new hit radio show in which Carl argues with himself about auto care, called Carl Talk.”