Former NPR newscaster Carl Kasell, whose “voice on your home answering machine” has been the ultimate prize on Wait Wait . . . Don’t Tell Me! for 16 years, is retiring, he announced today. 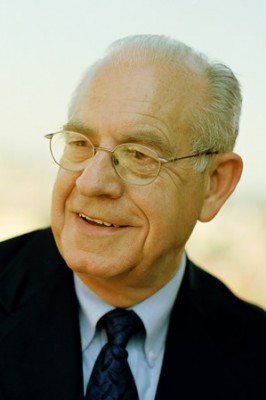 But his famous voice will continue to answer those messages. After his final Wait Wait show this spring, Kasell will officially become Scorekeeper Emeritus, still creating the voice-mail greetings and occasionally appearing on the program, a co-production of NPR and Chicago Public Media.

Kasell spent 30 years as the newscaster for NPR’s Morning Edition, from its premiere broadcast. “He was the voice people woke up to,” said Eric Nuzum, NPR programming v.p. “They opened their eyes, and for 30 years, Carl Kasell was there, reassuring them the world was still in one piece.” He also hosted NPR’s Early Morning Edition, a one-hour news program created in 1997 and incorporated into Morning Edition in 1998.

Kasell joined Wait Wait that year, playing straight man to its raucous host Peter Sagal. “My favorite time at NPR has been Wait Wait . . . Don’t Tell Me!,” Kasell said in the announcement. “It was loads of fun and gave me a chance to meet and talk in person to the audiences that I felt I had known for so many years on the air. I can honestly say I am the luckiest man around to be able to have worked at a job I love for so many years. It’s truly been a joy for me.”

His radio career spans half a century. Kasell joined NPR in 1975 as a part-time newscaster for Weekend All Things Considered. He previously spent 10 years at WAVA in Arlington, Va., as morning anchor and news director. Before moving to the Washington, D.C., area in 1965, Kasell was morning deejay and newscaster at WGBR-AM in Goldsboro, N.C., and worked at a local radio station part-time during high school.