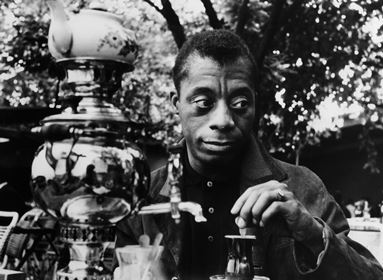 “James Baldwin: The Price of the Ticket,” which originally aired on American Masters in 1989, will find new life online with the help of an NEA grant. (Photo: Sedat Pakay, WNET)

The National Endowment for the Arts announced 886 grants Wednesday totaling $25.8 million for its latest round of Art Works projects, and multiplatform initiatives in public media had a strong showing, along with the usual suspects in broadcast programming.

Freeform radio station WFMU received $75,000 to build online tools around its Free Music Archive, while Games for Change got $55,000 to expand its interactive supplement to PBS’s Half the Sky series. An additional $50,000 went to the Maysles Institute to revive a 26-year-old James Baldwin documentary for a transmedia audience.

Sums went to public TV mainstays such as POV, American Masters and PBS NewsHour, while the NEA also gave sizable chunks to new and budding programming initiatives. NPR will use a $40,000 grant to mount a music portfolio for hip-hop and R&B similar to its Alt.Latino project, while the radio-drama company Los Angeles Theatre Works will put $100,000 toward expanding its two-year-old pubradio show.

This season’s other notable NEA Art Works grants to pubmedia organizations include: