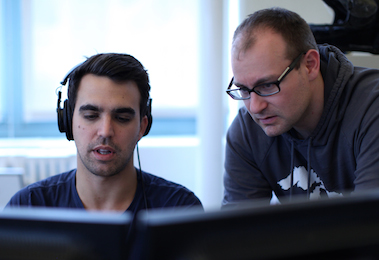 In mid-April, the website of Studio 360 launched Sideshow, a blog focused on “creative and artistic stuff that happens on the Internet,” said Leital Molad, the show’s senior producer. Hosted by producer Sean Rameswaram, the project, which will debut a companion podcast in late May, aims to be “a little more irreverent” than the radio show and hopes to attract a younger audience, she said.

Vogt, left, and Goldman, the duo running On the Media’s blog and podcast, have brought new audiences to the show’s website.

Studio 360 is designing the blog/podcast to be more timely, so it can cover daily stories that “no one would be talking about anymore” if they were to be incorporated into the weekend broadcasts, Molad said. Some of the new web content is also expected to eventually land on the radio program. In just the first week of the blog, traffic to the Studio 360 website jumped markedly, WNYC said.

Studio 360 is following a path set by On the Media, also produced at WNYC. Last fall, PJ Vogt and Alex Goldman, the two producers who handle OTM’s Twitter feed, launched a blog and podcast about the Internet, dubbed TLDR (webspeak for “Too Long; Didn’t Read”). The objective, said Katya Rogers, executive producer, was to bring people to the OTM website “via this really fresh voice.”

“We had this really nice website, and nothing was happening with it,” Rogers said. The site attracted less than 40,000 unique visitors each month, and the initial goal for TLDR was to bump traffic up to 50,000 unique visits. But the online coverage took off and OTM’s website is now getting as many as 70,000 unique visits each week, she said. Traffic from social media, which had previously generated one-fourth of the web visits, is now up to 33 percent.

OTM is surveying the visitors to learn more about them. “I feel like it’s a much younger audience,” Rogers said, and most likely not regular public radio listeners. She hopes they will begin listening to the radio show, as producers “amortize” some of the best TLDR podcast material on the weekly broadcast.

Unlike To the Best of Our Knowledge [related article], both Studio 360 and OTM have regularly retooled their radio formats. OTM underwent a radical post-9/11 relaunch when it moved from “quirky and light” to a focus on weightier issues such as the Patriot Act, said Rogers. Keeping it fresh with 52 yearly shows is a challenge, she said. Last year, the show aired co-host Brooke Gladstone’s extended interviews with singers such as Cyndi Lauper, in part to keep Gladstone engaged. (“It wasn’t so media,” Rogers said, adding that while the staff enjoyed doing something different, they wouldn’t repeat the experience.)

At Studio 360, chances for retooling come regularly, during a twice-yearly review process. The sessions get “surprisingly philosophical,” said Chris Bannon, WNYC’s v.p. of content development and production, noting that one sparked the realization that “the show is all about creativity,” and that “we were in a conversation every week with the audience about their own creativity.”

That inspiration led in 2010 to creation of the regular interactive feature, now called “Extra Credit,” that invites listeners to submit creative material to the show. Recently, more than 300 listeners submitted 30-second scary movies for a contest judged by horror-film director Wes Craven. Producers schedule a dozen such “listener engagement projects” each year, and while they live online, they also “inform” the radio show, Bannon said.