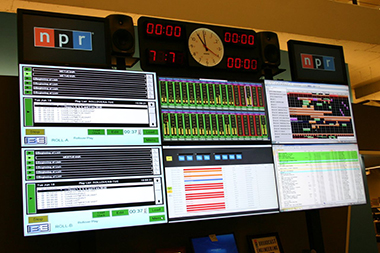 NPR has indicated that it’s unlikely to adopt an identical clock for its two flagship newsmagazines, a proposal put forward by station programmers.

The network has been reviewing the clocks for Morning Edition and All Things Considered, considering possible changes to the timing and length of each show’s elements. That includes segments, newscasts, promos, breaks, underwriting credits and the other bits and pieces that make up each hour of the shows.

NPR plans to unveil the revised clocks to stations later this spring and implement them by Oct. 1 after getting feedback from station programmers and focus groups. So far, NPR staffers have released few details about the changes that might be in store.

But during a Feb. 19 webinar about the clocks, an NPR producer said that revised clocks for the two shows are likely to differ, according to two programmers who participated in the session. The clocks have differed for years, but many programmers have told NPR that they want identical clocks, with ATC’s following a schedule like Morning Edition’s.

Programmers find it more difficult to squeeze local news into ATC, which has fewer breaks and longer segments. The signal that the morning clock would not migrate to afternoons as well dismayed Jeff Hansen, p.d. at Seattle’s KUOW, an advocate for the proposal, who watched the webinar and discussed it with Current.

“The ATC staff has a long history of resisting any changes to their clock,” Hansen wrote in an email. “My guess is that this is why NPR does not wish to have a universal clock. But they will need more than that to make their case to the system that there will be no universal newsmagazine clock.”

Hansen worries that NPR might end up making Morning Edition’s even less accommodating for content from stations and other national distributors. He and other station programmers see customizing the newsmags with local content as a way to deliver a unique program service to listeners in their markets.

“It would be a shame at this stage in the game if we took a step backwards just when we should be going forward aggressively,” Hansen said.

In the webinar, NPR staff demonstrated a focus on what listeners want, “and that’s important,” said Michael Arnold, director of content at Wisconsin Public Radio. But with the new clocks, “it will be impossible to make everybody happy,” he said. “There are just too many stakeholders.”

Arnold expressed concern that NPR may introduce the clock too close to stations’ fall fund drives, though network staffers said during the webinar that they hope to avoid that.

In an interview, NPR content chief Kinsey Wilson would not comment specifically on whether the newsmags’ clocks will differ. “Inevitably, there are a hundred different tradeoffs you make as you look into the issues — the flow, corporate underwriting, ‘stationality,’” he told Current. “It’s the balancing of all of those that is really the art form here.”

“People are waking up to different devices than they did 20 years ago and have lots of different media choices at their disposal,” Wilson added. “Understanding how to optimize that experience is really the core objective.”

NPR will discuss its work on the clock with station executives at an upcoming series of nine regional conferences, starting this week in Denver, Seattle and St. Louis. The meetings will also cover NPR’s new mobile app and how NPR and its member stations could increase collaboration on news reporting.

That discussion will focus on “whether there’s an opportunity to build a true local-national news network that’s even more robust than what we have in place today,” Wilson said.