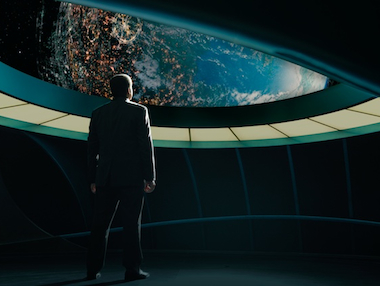 In the opening minutes of Fox’s Cosmos: A Spacetime Odyssey, host Neil deGrasse Tyson stands on a cliff overlooking the California coastline and delivers a speech about the grandiosity of the universe.

Over the course of the next hour, Tyson boards a sleek “Spaceship of the Imagination,” tours through the solar system and plots out the history of the universe on a giant cosmic calendar. If the history of time were compressed into a single year starting with the Big Bang on Jan. 1, the existence of humans would cover only the last few seconds before midnight on Dec. 31, he explains.

This journey and these heady concepts have been explored before, by the late, renowned Carl Sagan. The scientist’s 1980 public television series, Cosmos: A Personal Voyage, provided the template for this update. Produced by Los Angeles’s KCET, the program made up the highest-rated series in pubTV history at the time, and its cultural impact spans decades. But to get the new Spaceship of the Imagination aloft, Cosmos’s original producers chose to voyage far beyond the realm of public TV.

The 13-part Cosmos: A Spacetime Odyssey will premiere March 9 simultaneously on 10 commercial networks, including Fox and the National Geographic Channel. Years before the project landed on Fox, writer and EP Ann Druyan shopped proposals for a Cosmos revival to PBS and other networks. Druyan produced the original Cosmos and co-wrote it with Sagan, her husband.

Druyan said other networks wanted to “edit out the uncomfortable parts” from Cosmos.  (Photo: Patrrick Eccelsine/Fox)

In an interview with SXSWorld magazine, Tyson said he and Druyan approached networks including PBS, Discovery Communications and National Geographic about the remake. “There was no shortage of offers, but we had the feeling that they wanted to turn Cosmos into one of their own style of documentaries,” Tyson said. “And Cosmos has its own way of narrative storytelling.”

Druyan declined interview requests from Current. But at a preview of the new series, Druyan said she shopped Cosmos to “the usual suspect networks” for science-oriented programming.

“They wanted to control it,” she said at the March 4 event, held in Los Angeles. “They wanted to be able to edit out the uncomfortable parts, and I said no, and I am so glad that I did.”

A PBS spokesperson declined to comment on why Cosmos did not end up on the network.

Seth MacFarlane, creator of Fox’s Family Guy and an EP of the new series, connected Druyan with Fox after talks to revive the series at PBS failed, according to Soter. MacFarlane is a mega-fan of Sagan’s. In November he donated money to the Library of Congress to create a permanent archive of Sagan and Druyan’s work.

By working with Fox, the new series could reach viewers who might not usually watch science programming, Tyson said.

For maximum impact, the series needed “a certain P.T. Barnum element” of theatricality, MacFarlane said at the preview event. The show’s crew comprises commercial sci-fi veterans instead of the BBC documentary pros of the original. Director Bill Pope served as director of photography for The Matrix trilogy, EP Brannon Braga produced three Star Trek series, and the special-effects producers worked on the Harry Potter, Twilight and Spider-Man movies.

An original score by Alan Silvestri, who scored Forrest Gump and the film version of Sagan’s novel Contact, replaces the 1980 version’s soundtrack of classical music and works by Greek electronic composer Vangelis. “We wanted this to feel like a Hollywood spectacle,” MacFarlane said.

The new series diverges from the original with quicker pacing, an upgrade in special effects and more than three decades’ worth of new scientific research to draw on. Following McFarlane’s suggestion, it replaces the live-action historical re-enactments of the original Cosmos with animated sequences, though the style is far removed from that of MacFarlane’s comedy series Family Guy and American Dad.

The Spaceship of the Imagination is a sleeker model, and instead of warning against the destructive effects of the U.S. nuclear program, as Sagan did in the original, Tyson addresses the need for scientific inquiry in today’s world. Several passages in the new series focus on scientists whose research faced opposition from governments and religious institutions.

The production enlisted 12 visual-effects houses, and the shoot lasted 70 days, a speck of time in the cosmic calendar compared to the original’s three years of production.

The producers of the new series “tried to maintain the same set of values, approach to science and marriage of skepticism and wonder,” Soter said.

It also aims to educate viewers about Sagan himself. In the closing minutes of the new Cosmos, Tyson pulls out a different sort of calendar: Sagan’s own, from 1975. Tyson notes a page where Sagan, then a Cornell University professor, marked a meeting with him, back when Tyson was a high school senior debating which college to attend. Though Sagan gave him a tour of the campus and offered his personal phone number, Tyson ultimately decided on Harvard over Cornell.

Decades later, he and Cosmos are on the verge of global superstardom, thanks to the efforts of Sagan and public TV.