With a relaunch of the 1980 series Cosmos preparing to take flight on Fox March 9, a major commercial network finds itself in debt to public TV, where the original exploration of the universe’s mysteries aired 34 years ago.

The original 13-part Cosmos: A Personal Voyage, produced by Los Angeles’s KCET, was the highest-rated program in the history of public television until Ken Burns’s The Civil War in 1990. It aired in more than 60 countries and reached hundreds of millions of people worldwide.

It also proved a challenge and sometimes a nightmare to film, with a production budget in the millions, a three-year filming period, a slew of old-school special effects and clashes between its creators and the program’s iconic, temperamental host, Carl Sagan.

But the effort proved worth it, yielding a show unlike any other documentary in public TV history.

As its charismatic host, Sagan was the original show’s most distinctive element. He had taught at Cornell University and written or co-written three books about science before the 1973 publication of his bestseller The Cosmic Connection: An Extraterrestrial Perspective. The book laid out the ideas that Sagan would eventually incorporate into the public TV series. 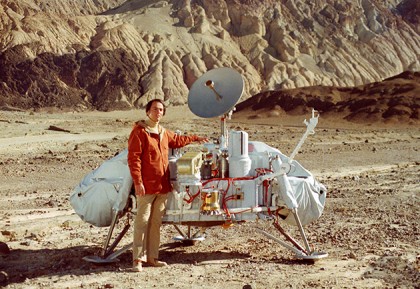 Carl Sagan poses with a model of NASA’s Viking spacecraft in 1980.

In his wide-ranging career, Sagan also helped design unmanned spacecraft for NASA and briefed Apollo astronauts before their flights to the moon. He found a national audience throughout the 1970s in appearances on The Tonight Show with Johnny Carson, where he discussed astrophysics in terms that lay viewers could understand.

With jet propulsion engineer and science-fiction writer Gentry Lee, Sagan formed Carl Sagan Productions, a production company “dedicated to the communication of science in an engaging and accessible way,” as he recalled in the introduction to the companion book to Cosmos.

Meanwhile, Los Angeles’s KCET was looking to produce more original multipart programs in response to public criticism that it aired too many BBC imports, according to Charles Allen, then the station’s head of programming. It was in the midst of producing a 13-part series about economics when Allen helped push through an idea for a multipart documentary about outer space.

“Cosmos was a winner of such magnitude that for a decade it was hard not to find some stranger that confided that he invented Cosmos,” Allen wrote in an email. But, he added, “I was the great enabler of Cosmos.”

Allen and other KCET execs, spurred by producer Greg Andorfer’s pitch for a science series, called on Sagan’s newly formed production company with the initial proposal for Cosmos. “We were approached on a number of projects, but by far the most interesting was an inquiry tendered by KCET,” Sagan wrote.

Sagan was looking for new ways to share his enthusiasm for science with a wider audience. Ideas about outer space were popping up throughout popular culture with the release of Star Wars in 1977, the first year of production on Cosmos. Sagan and KCET were part of “a zeitgeist” around ideas in science, said Cathy Trentalancia, who worked as a production coordinator on the first Cosmos and as a historical research consultant on the new series.

Producers thought that Sagan’s unique style as a presenter made him ideal for explaining complex science to ordinary viewers. His framing of concepts in physics and astronomy incorporated his wry sense of humor. Everyone and everything in the universe is made up of “star stuff,” he said, and the planet Earth was a “pale blue dot.”

“He wasn’t going to be a dry lecturer,” said David Kennard, a series producer who directed many location shoots. “He was going to stop every 10 minutes and say, ‘Just think of that. How incredible is that?’”

KCET began production on Cosmos in 1977, with oil giant Atlantic Richfield Company as a corporate sponsor and the Arthur Vining Davis Foundation and Alfred P. Sloan Foundation providing additional support. The project’s unprecedented size and scope kept it in development for three years. Its $8 million budget made it the most expensive public TV program ever, according to National Geographic. 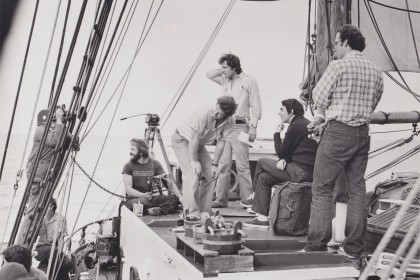 Sagan and crew onboard a schooner off the coast of Mexico, recording dolphin speech for Cosmos.

Producers aimed to give the program a distinct aesthetic. Costumed actors portrayed key moments in scientific discovery, such as Johannes Kepler uncovering the laws of planetary motion, and often recreated such scenes at their original locations. For wraparound narration segments, Sagan piloted a physical “spaceship of the imagination” through the stars.

The crew improvised to create effects unlike any viewers had seen. To replicate Saturn’s icy rings, Malone painted a parking lot black, built a crane-trolley contraption and asked a producer to gather mounds of glass. “We then dropped these [glass bits] in great bunches, from bags beside the camera, from a height going down past the camera and rushing into blackness,” he said. “And all I did then was reverse the film . . . so these things are roaring at you.”

To depict the immensity of space travel, Malone and his crew kept cameras rolling for shots of up to seven days while they passed “a lot of drawings and paintings of stellar bodies of various sorts” through the frame.

In step with the improvisational approach, the crew “never had complete scripts before shooting,” said Steven Soter, a New York University astrophysicist who co-wrote the original series and is a co-writer and head researcher for the new Cosmos. He and Druyan had not finished the script for the segment about Kepler when the crew of Cosmos traveled to European locations including Germany, Austria and the Czech Republic to shoot it, he said. Soter and Druyan later wrote a mostly voiceover script to correspond with the filmed segments in a single night in KCET’s studios, working through a small earthquake.

With the prolonged production time, the team had to ensure consistency among elements such as Sagan’s trademark bowl cut. “You are shooting out of sequence, so footage you shoot today has to match with footage you’ll be shooting in a year,” Allen said. “The haircut matters.”

Meanwhile, Sagan had free reign to share intelligent speculation about what alien life forms might look like, complete with illustrations. He also delivered strong critiques of the U.S. nuclear program, devoting large parts of the program’s final episode, “Who Speaks For Earth?,” to warning against nuclear weaponry’s destructive effect on the planet.

Only some of the clashing bodies on set were celestial. “The personalities were so big on Cosmos that there were collisions, like meteorite collisions,” said Trentalancia.

Associate Producer Judy Flannery compared the filming of Cosmos, with its long hours, drawn-out battles between crew members and high levels of dedication over a period of years, to serving in a war.

“You’re in the trenches,” she said. “Whenever anyone has experienced anything intense for a prolonged period of time, you bond with those people and you share war stories.”

Sagan and Malone clashed in particular. Each was accustomed to taking the lead on his own projects, and the two fought on set several times over technical aspects of the production. “The two of them were like oil and water,” Flannery said. “There was a lot of personal competition.”

Malone recalled their spats as “somewhat childish . . . the sort of thing you try not to remember.” But the competition spurred them to try to top each other, resulting in a stronger final product, he said.

“That tension really made things move along pretty quick and made us think always twice, possibly three times, in order to make sure we were getting ahead of each other,” Malone said.

At the end of the day, he said, “Sagan respected what I knew, what I knew how to do, and I thought exactly the same of him.”

But the infighting wore on the young crew. Many joined the production with the hope of finding mentors in Malone and Sagan, according to Flannery.

“It was just a big disappointment on a human level for a lot of us to find out our heroes had human frailties like everybody else,” Flannery said.

The stress of the production “probably put ten years on me,” Kennard said.

Deeper into the cosmic ocean

All the struggles and stress proved worthwhile when Cosmos aired. Not only did the series break public TV ratings records, it sold 1.8 million copies of its companion book. Media coverage and a big publicity push for the program, including a Time magazine cover, helped turn Sagan into a household name, and schools and universities adapted the program for science classes.

“The press was unbelievable. ‘A breadth of vision never before seen on television,’” Kennard recalled. “Whoever put a nickel into that show sure got many nickels back.”

Working on the program also yielded benefits for the production team and, in turn, public television’s talent pool. Many of the original “Cosmonauts,” as they call themselves, went on to long careers in public television.

“We were a very idealistic bunch,” said Flannery, who went on to produce for Great Performances and other public TV performance specials. “This was a very impressionable time in our lives and our careers, and I think that series just meant so much to people. I think we saw the potential and the capacity of what public television could do in terms of enriching people’s lives.”

When Malone went to a hospital for heart surgery, his doctor told him Cosmos was the reason he got into science. “That, to me, was a good way of saying that I got into the right place and I did the right thing,” said Malone, who continued to direct and produce public TV specials including Millenium: Tribal Wisdom in the Modern World and The Nobel Legacy in the ’90s.

Sagan died in 1996 due to complications from pneumonia, but the legacy of his program lives on.

“I am fantastically proud of having played the role I’ve played,” Kennard said. “I am fantastically proud that we actually managed to pull this incredibly complex, state-of-the-art bear of a production together.” Promoting his recent documentary, A Year in Burgundy, at the 2013 Santa Barbara Film Festival, Kennard mentioned that he had worked on Cosmos, “and the whole cinema burst into applause.”

2 thoughts on “With new ‘Cosmos’ on horizon, makers of original look back”