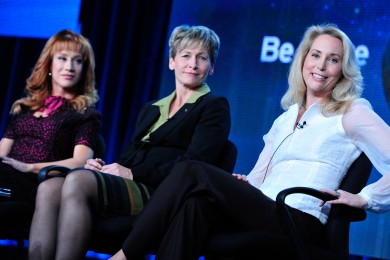 During PBS sessions at the twice-annual event, which wrapped up its winter confab Jan. 22, writers heard that underwriters have flocked back to Masterpiece, Antiques Roadshow is revving up for a big production tour, PBS Kids is launching a new math series and filmmaker Ken Burns is, as usual, busy at work on multiple projects.

Creative talent from Sesame Street reflected on the departure of puppeteer Kevin Clash, who resigned from the show in 2012 to battle allegations that he had molested young men; and indie filmmaker Bill Siegel discussed the nettlesome similarity between The Trials of Muhammad Ali, coming to Independent Lens April 14, and HBO’s dramatic take on the same subject, which debuted in October. Both down notes were handled with measured chagrin.

And what would a PBS press event be without an update on the gem of pubTV primetime, Downton Abbey? During her session with TV critics, President Paula Kerger said the network considered moving its season debut closer to the popular drama’s fall broadcast release in Britain — a topic of conversation at last January’s Press Tour — but decided to stick with its practice of delaying new shows until January.

“It’s become a bit of a tradition after the holidays to come together to watch Downton,” she said.

The proposed schedule shift would have put the show in competition with fanfare surrounding the new commercial TV season, Kerger said. Plus, an earlier debut would have made it more difficult to bring the actors in the series to the U.S. to promote the show.

PBS is in the “final stages” of hiring a replacement for John Wilson, the veteran program executive who resigned Jan. 3. The new hire, senior v.p. of development services, will work to improve public TV fundraising efforts at both the local and national levels, Kerger said.

And Stephen Segaller, WNET’s production chief, said the New York station is recruiting a new executive producer for American Masters, the biographical PBS arts series created by Susan Lacy, who left last fall to produce for HBO. “We are actively seeking to replace the irreplaceable,” Segaller said, noting he hoped to have the new exec in place before the Summer Press Tour in July.

Masterpiece E.P. Rebecca Eaton shared news that few pubTV shows can match. “I never thought I would be able to say this to you,” Eaton said. “We are currently sold out for underwriters.”

Meanwhile the Masterpiece Trust, created three years ago to solicit major-donor gifts supporting the iconic drama series, has grown to $6 million, she reported. PubTV stations are benefiting too, as contributors can designate local outlets to share in their donations.

British drama, always a part of PBS’s DNA, is flourishing across the national schedule. In addition to ratings winners Downton Abbey and Sherlock, viewers are showing up for newer series such as Mr. Selfridge, Eaton said. “Our dilemma now is what to do with all of it, and we are working with our colleagues at PBS to figure that out.”

PBS announced acquisition of a second season of Last Tango in Halifax, the contemporary Brit soap opera, and will introduce a new sitcom this summer starring Tango lead actor Derek Jacobi and Ian McKellen. Vicious, an ITV production about a bickering gay couple, will join the PBS lineup July 6.

Antiques Roadshow, another viewer favorite, announced a summer tour that will take the show to New York for the first time in a decade. Appraisal events will also be staged in Chicago; Austin, Texas; Bismarck, N.D.; Santa Clara, Calif.; Birmingham, Ala.; Albuquerque, N.M.; and Charleston, W.V.

Panelists at the Roadshow session included appraisers who spoke with disdain about cable shows that assess the value of antique and historical items, including Pawn Stars, American Pickers and Storage Wars.

Appraiser Wes Cowan was pointedly critical. “Those shows are totally staged and Antiques Roadshow is not,” he declared. “It’s completely legit. Is it reasonable to think that somebody is going to find a $100,000 item in a storage locker that somebody else didn’t pay rent on? I mean, come on.”

Ken Burns, whose prodigious output continues to impress TV writers and fans alike, has a slate of seven productions that will keep him busy tackling a variety of subjects through the end of the decade: The Gettysburg Address (set to air April 15), The Roosevelts (this fall), cancer (early 2015), baseball great Jackie Robinson (fall 2015), Vietnam (2016 or 2017), country music (2017 or 2018) and Ernest Hemingway (2019 or 2020).

Next up? “Now we are beginning to talk about the ’20s, and we have over a hundred ideas for films,” the filmmaker told critics. There will be conversations with PBS, his media home, but ultimately subjects “will be picked basically by me on a gut thing.”

Dyllan McGee, founder and e.p. of the Makers series of documentaries on successful women in various fields, continues her multimedia production for partners PBS and AOL. The initiative launched two years ago and now boasts more than 200 video interviews on an expansive website that has generated more than 60 million views. “And my favorite stat of all,” McGee said, “is that 50 percent of the traffic that comes to the website is male.”

Before 2014 is over, McGee predicted, 100 new video interviews will be uploaded to the site. She also announced six new one-hour documentaries for PBS that will highlight stories of women involved in war, space, comedy, business, politics and Hollywood.

Puppeteers from Sesame Street used their session to mark the 45th anniversary of the landmark kids’ show. One reporter asked about the impact of Kevin Clash’s departure in November 2012.

“Kevin was my mentor and Kevin is an amazing performer, an amazing man,” said Joey Mazzarino, head writer and puppeteer. “As you could pretty well imagine, it was devastating for us, and it’s still, on a daily basis, hard. But we came together, and we know it’s bigger than any one of us. And we just keep going.”

“The thing about Sesame Street that I figured out over the years,” said Carol-Lynn Parente, e.p., “is that there was a group of visionaries who started the show . . . and the show has become bigger than them. It’s bigger than any one person.”

In a session on independent documentaries coming to PBS, filmmaker Bill Siegel told writers that he started working on The Trials of Muhammad Ali “long before” HBO began production of its drama, Muhammad Ali’s Greatest Fight. Both films dealt with the court case in which Ali claimed conscientious objector status to keep from being drafted during the Vietnam War.

“As a documentary filmmaker, you always have this fear — especially when you are working on an historical film — that somebody else is out there doing it,” said Siegel, a producer with Kartemquin Films. “So when I first heard about that HBO film, I was mortified. I just couldn’t believe it was happening. It was the same story.”

Siegel eventually concluded that both films would benefit from being released at about the same time.

“I just saw it for the first time two nights ago,” Siegel said of the HBO film. “It’s good. I give it a solid ‘good.’”

“I wouldn’t,” disagreed Robert Lipsyte, the New York Times sportswriter who has been covering Ali since 1964. “I wouldn’t give it a solid ‘good’ at all. I thought it was boring.” Lipsyte described himself as “a real big fan” of Siegel’s doc. “I think it’s the only thing that really captured him totally, warts and edges and all.”

There’s no chance of duplication of the new PBS Kids show Odd Squad, which features youngsters Olive and Otto working at an agency that saves its town from bothersome math-related problems.

The show was created by Tim McKeon and Adam Peltzman, both of whom worked on The Electric Company. It’s produced by Sinking Ship Entertainment and the Fred Rogers Company.