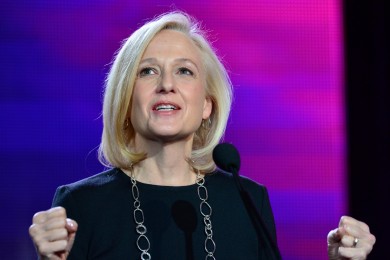 PASADENA, Calif. — PBS is in “the final stages” of hiring a new executive to improve public TV fundraising efforts at both the local and national levels, President Paula Kerger announced during the Television Critics Association Winter Press Tour.

The new hire, senior v.p. of development services, will pick up where John Wilson, a veteran PBS program executive who resigned Jan. 3, left off, Kerger said during a Jan. 20 executive session with TV critics and editors.  She would not reveal names of candidates for the job or predict when the hire will be announced.

A short time later, an executive from New York’s WNET updated critics on plans to recruit a new executive producer for American Masters, the biographical PBS arts series created for the station by Susan Lacy, who left last fall to produce for HBO.

“We are actively seeking to replace the irreplaceable,” said Stephen Segaller, WNET’s production chief. He promised that Lacy’s successor will be named before the TV critics’ next meeting in July.

Kerger, who worked at WNET as c.o.o. before joining PBS, expressed confidence that American Masters will continue to be an important part of PBS’s primetime programming. Lacy had assembled a great team of producers for the series, Kerger said, and she intends to work with WNET to keep the series strong.

In an interview with Current, Kerger described the focus of Wilson’s work during his last year at PBS, when he had been reassigned as senior v.p. of pledge strategy and special projects. “The big thing he was focused on was around messaging — not just getting people to buy a DVD, but to get people involved with the station,” Kerger said. Rather than soliciting one-time pledge gifts, stations are looking to cultivate more sustaining donors, who “get in the habit of supporting the station.”

PBS’s new development executive will have “a good overview across all of the fundraising we do in public broadcasting” and will “help our stations connect better with donors online,” Kerger said.

During her session with TV critics, Kerger also said that PBS had considered moving the season debut of Downton Abbey closer to the popular drama’s fall broadcast release in Britain — a topic of conversation at last January’s Press Tour — but decided to stick with its practice of delaying new shows until January.

“It’s become a bit of a tradition after the holidays to come together to watch Downton,” she said.

Viewers and critics had asked PBS to consider a fall debut for Downton, but the proposed schedule shift would have put the show in competition with fanfare surrounding the new commercial TV season, Kerger said. Plus, an earlier debut would have made it more difficult to bring the actors in the series to the U.S. to promote the show.

In other Press Tour news, PBS also announced upcoming programming that includes a second season of the popular British drama Last Tango in Halifax and a Ken Burns film on country music.