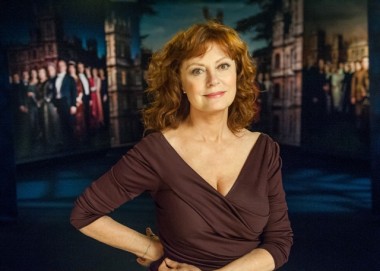 Susan Sarandon is the program host for this season's Downton Abbey on Masterpiece, and also hosted the December pledge special. (Photo: Stephanie Berger)

A Downton Abbey pledge show from PBS was the top fundraiser for December public television drives, but repeats of the hit Brit drama may also have cut into station time for raising a bit more money on the air.

Susan Sarandon is the program host for this season’s Downton Abbey on Masterpiece and also hosted the December pledge special. (Photo: Stephanie Berger)

PBS’s Return to Downton Abbey, an overview and behind-the-scenes show hosted by actress Susan Sarandon, generated the most cash, with just under $1 million nationwide for those TRAC clients, Kuebler said.

But some station development departments were “taken by surprise,” she said, when PBS scheduled last-season Downton repeats during the drive. “That was the cause of a lot of discussion and consternation,” Kuebler said. “Stations were basically losing a chunk of primetime on a Sunday night” that could be used to pitch for donations.

But PBS spokesperson Jan McNamara said stations “across the system” pledged at the conclusion of those episodes. “Also, a number of stations chose to air pledge programming during those time slots and doubled up on Downton reruns after their drives concluded,” she said.

The classical offering — a new genre for a producer known for his doo-wop pledge success — raised more than $1.5 million from 10,000 contributions nationwide based on conservative preliminary figures, Lubinsky told Current.

“One goal for me was taking the lead from what symphony halls across the world are doing,” Lubinsky wrote in an email, “trying to find new pledge ways to connect newer potential audiences with only the classical hits versus targeting the more familiar and hard-core classically trained fans already in stations’ membership files.”

The show raised just over $500,000 for TRAC clients. Despite skepticism among station development staffers, “that did extremely well in many markets, and not just those where classical performs well,” Kuebler said. She expects an even better showing for the program in March, now that stations know it works.

Alan Foster of Executive Program Service, another major pledge distributor, said BrainChange, the latest self-help show from Dr. David Perlmutter, also did well, outperforming even the Downton special for East Tennessee PBS in Knoxville and AETN in Conway, Ark. “There’s already a lot of demand for him in March also,” Foster said.

Doc Martin: Revealed, an on-set peek into production of the quirky British show, was “hugely successful” in December, said Jamie Haines, spokesperson for distributor American Public Television. And the fourth release of Haley’s Hints, a household how-to offering, performed so well that APT had to reorder premiums during the drive.

Kuebler said that in June 2013, the last drive without sustainer language, TRAC clients nationwide brought in some 3,000 sustaining pledges. Last August, with the new language, that jumped to around 6,000, and in December, 9,000.

TRAC stations “are pretty much hovering around 20 percent of total pledges as sustainers,” she said. “That’s fabulous news.”