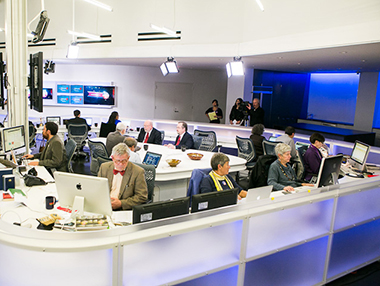 Nonprofit news organizations have made significant progress in developing healthy and sustainable revenue streams, according to a recent study by the Knight Foundation.

The foundation examined the finances and analytics of 18 nonprofit newsrooms between 2010 and 2012, and found that 14 either broke even or increased their revenues in the study’s final year. Six of those newsrooms did so over the entire three-year span.

Organizations that posted the biggest revenue gains diversified their business models by devoting more resources to non-editorial pursuits such as marketing, fundraising and events, according to the study’s architects.

“It is a demonstration of progress,” said Mayur Patel, v.p. of strategy and assessment at Knight and a lead researcher on the report. “Given the current climate that we’re talking about, survival is no small feat.”

The study, published Oct. 29 and written primarily by Michael Maness, v.p., journalism and media innovation at Knight, evaluated a variety of nonprofit newsrooms at local, state and national levels. It encompassed several nonprofits with connections to public broadcasting, including the Center for Investigative Reporting, an editorial partner with Frontline and NPR that is developing the investigative public radio series Reveal with PRX; Denver’s I-News Network, now part of Rocky Mountain PBS; NJ Spotlight, a New Jersey public affairs site that partners with several regional public media outlets; and the St. Louis Beacon, which is in the final stages of negotiating a merger with St. Louis Public Radio.

The largest organizations in the study, ProPublica and CIR, were also the top revenue-earners, bringing in $12 million and $10 million respectively in 2012. Local and regional standouts included Voice of San Diego, which grew its income from individual donations and closed 2012 with a surplus of $300,000.

The study’s authors provided eight major takeaways from their analysis, detailing the steps the most successful nonprofit news ventures have taken:

Overall, the report found that nonprofit news outlets have made progress in building earned revenues and reducing their reliance on foundation support.

Across all organizations included in the study, the proportion of foundation support among all other funding sources declined from an average of 65 percent of total revenues in 2010 to 50 percent in 2012. At the same time, state and local news organizations dramatically expanded their earned revenues to roughly a quarter of their total income. Financial support from individual donors, a growing source of revenue for national outlets CIR and ProPublica, jumped 30 percent during the two years.

While many nonprofit newsrooms in the study directed most of their funding to editorial operations, the most financially successful outlets were distinguished by their investments in business strategies.

The Texas Tribune has the most revenue streams of all the outlets included in the study, which highlighted its healthy live-events business and investments in marketing and development.

This type of content and revenue expansion is difficult for many nonprofits, according to Maness. They struggle to consistently keep innovation at the forefront of their operations.

“Once you get going in your organization, it’s hard to stop and say, ‘Oh, let’s spend some money on business development or on technology,’” said Maness. “The whole push is to get the website up. Most of these sites are running every day just to keep the journalism going and keep the lights on.”

Public media’s traditional pledge model can serve as a framework for startup nonprofits, which have the capacity to expand the pledge playbook by using data to facilitate sustaining relationships with donors, Patel said.

In contrast to public media, he noted, some nonprofit news organizations have begun experimenting with ways to connect individual donor data with more personalized services that can be tailored to their unique interests, Patel said. That’s how he sees the pledge model evolving, particularly as “more radio content is consumed digitally.”

Pubcasting outlets are allied with the news organizations examined in the study, yet veteran pubradio consultant Michael Marcotte views the analysis as further evidence that pubcasters are falling further behind nonprofit news startups in the realms of research and innovation.

Pubcasting hasn’t invested in “research that reinforces these ideas and that helps show us the way,” Marcotte said. “There’s just a lack of research and development, period.”

In a Nov. 4 blog post responding to Knight’s report, Marcotte criticized CPB — the funder that holds the most influence over pubcasters — for not sharing comparative data from its grantees, as Knight has done. CPB, he wrote, hasn’t been “as concerted in its effort to grow public media through a national conversation about the future of news, as Knight is so good at doing.”

Financial transparency about their operations and business plans has been an important concession for upstart newsrooms to make, said Patel. Yet the data has helped develop a shared understanding of what’s working.

“You really have to tip your hat to these organizations,” Patel said. “They have willingly said, ‘Yes, we’re happy to share all of our financial data, as well as insights into our models, so that others can benefit, and so that we can benefit.’”

One thought on “Diversified revenues are key to sustainability, Knight study finds”