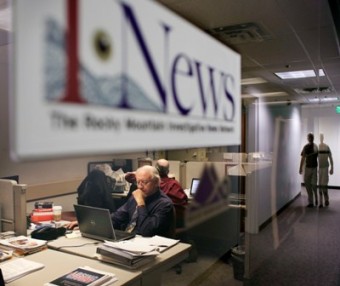 The merger deal, announced Jan. 15, requires FCC approval because it includes the transfer of KUVO’s license to Rocky Mountain PBS. There’s no cash involved in the transaction, but RMPBS is absorbing some of KUVO’s debt. Commission approval could come as early as April, according to RMPBS President Doug Price.

This merger is an official marriage ceremony for three entities already engaged: The five-person newsroom for I-News is housed within RMPBS headquarters, and the public TV station has served as the nonprofit’s fiscal sponsor since its launch four years ago. Late last year, RMPBS began providing accounting and other back-office support for KUVO, which is a few blocks away.

Though each outlet faces a different set of financial challenges, Price sees the agreement as a way to move beyond them.

“It’s a war out there every day to make money for all public media,” Price said. “Could each of us survive under the current formats? Sure. For a couple years, we’d have decent cash flow. But could we remain intact for the next 50 years just doing what we do now? No. To serve the public and create a robust future for all of us, this is the better way.”

RMPBS has an annual operating budget of $11 million, more than seven times the scale of KUVO and I-News. KUVO’s revenues dipped below $1.2 million in 2010, according to its tax filing for the year, and the station ran a deficit of nearly $327,000. I-News operates on $500,000 annually, although it relies on foundation grants.

“We can take our brand and combine it with RMPBS, expose it at a much deeper level within the seven-county Denver area and elevate it with their resources,” said Carlos Lando, interim president and program director of KUVO. The board of licensee Denver Educational Broadcasting is minority-controlled, and the station’s jazz and blues format attracts a listenership of minorities, an audience RMPBS is eager to reach.

RMPBS has a vastly larger membership base of 63,000; when the two stations combine, total membership will grow to more than 70,000.

Inclusion of I-News brings newsgathering capacity to the expanded organization. I-News has more than 60 reporting partners and is among the news organizations that cofounded the nonprofit national Investigative News Network. INN’s membership includes MinnPost, NPR and ProPublica, each with the ability to share resources and content.

I-News and KUVO have also collaborated with another Denver-based pubcaster on content — Colorado Public Radio, which operates separate services broadcasting news and talk programming, classical music and contemporary music. CPR worked with RMPBS to produce coverage of the 10th anniversary of 9/11 and the 2008 Democratic National Convention. But CPR isn’t interested in combining operations. CPR “prefers working with partners rather than merging,” said Sean Nethery, s.v.p programming.

Rocky Mountain PBS is a veteran of the decades-long push to strengthen public TV stations by negotiating for partial mergers and shared back-end operations with other pubcasters in its market.

“There is so much fear around mergers and the potential loss of control,” says RMPBS chief Doug Price, right. But the agreement with KUVO and the I-News allows each public media outlet to strengthen its public service. From left, merger partners Carlos Lando of KUVO and Laura Frank of I-News. (Photo: Mike Pappas)

Its joint master control partnership with Denver’s KBDI-TV, negotiated in the late 1998 (Current, Oct. 12, 1998), dissolved in 2009. The next year it explored consolidating its technical operations with KAET in Phoenix, but the talks didn’t produce an agreement (Current, March 1, 2010).

The Colorado merger grew out of a gift from the Gill Foundation, a Colorado-based advocacy organization for lesbian, gay, bisexual and transgender rights, which donated its $1.3 million Colorado Springs building to RMPBS in July 2012. The private donation was the largest in RMPBS’ history, and backed creation of a nonprofit cooperative that produces content, hosts community events and trains college students in new-media skills. Partners in the Tim Gill Center for Public Media include universities and community colleges, libraries and public radio outlets such as KRCC in Colorado Springs and the Rocky Mountain Community Radio group, representing 16 public and community radio stations statewide.

The center opened its doors last September, and Price describes RMPBS’ interactions with other co-op members as transformative.

“There is so much fear around mergers and the potential loss of control,” Price said. “The Gill Center taught us to create trust and partnerships.”

The experience inspired Price to bring Laura Frank and Lando into RMPBS as senior executives. “We wanted that senior management as much as we wanted the merger,” Price said. The partners’ content strategies will remain intact, “generally speaking,” he said, with increased emphasis on digital strategies.

Frank, currently executive director of I-News, becomes v.p. of news in the new organization. Frank isn’t concerned about loss of autonomy, she said, because she’ll be involved in the stationwide decision-making process. She doesn’t foresee problems with blending workplace cultures of the three outlets: When I-News set up its newsroom within RMPBS in 2009, “there wasn’t really an existing newsroom, so we brought that culture. And the station totally embraced it, from top to bottom.”

Frank is already contemplating how to deploy the additional reporters. I-News has produced several high-profile investigative news stories that influenced public policy, such as a report that prompted the state legislature to close loopholes in regulations dealing with hazardous electronic waste.

Publication or broadcast of investigative news reports once signaled the end of a project, Frank said, but the merger will allow the team to go beyond delivering the news.

Price said I-News “has been very self-sufficient so far” through national and local foundation grants. Major support comes from the Knight Foundation and the Ethics and Excellence in Journalism Foundation, based in Oklahoma City.

Lando, interim head of KUVO since October 2012, is especially impressed by RMPBS’ willingness to embrace KUVO’s commitment to diversity.

“We’re primarily a staff of Latinos and African-Americans, and we’ve been in this community for 27 years,” he said. RMPBS “made it clear it wanted to become more diverse and get our programming into areas of the state where we don’t currently broadcast,” such as the southern region around Colorado Springs.

Lando is eager to have access to news coverage from I-News. The station experimented with news programming over the past few years by adding Public Radio International’s The Takeaway to its morning schedule.

“That was our first time getting away from music, and it didn’t work too well,” Lando said. “We took what we learned from that experience and produced our own morning show, which has music elements.” First Take with Lando and Chavez combines community news with arts and culture. The station also produces what Lando calls “information capsules” on important topics for listeners, such as health, education and homelessness.

KUVO, with an annual operating budget of just under $2 million, has struggled financially, and Lando expects that the merger will reduce those pressures. It’s already saving several thousand dollars a month through its contract to outsource back-office operations to RMPBS. The PBS affiliate also has made arrangements to host KUVO’s antenna on its tower; the station pays rent through a trade-out underwriting agreement with RMPBS and a small amount of cash.

According to Price, the debt that RMPBS will assume under the purchase agreement is minimal.

The merger was never primarily about finances, Price said. “That didn’t remotely drive each board’s view. This was driven by ability to better serve the public.”

One thought on “New alliance in Mile High City”