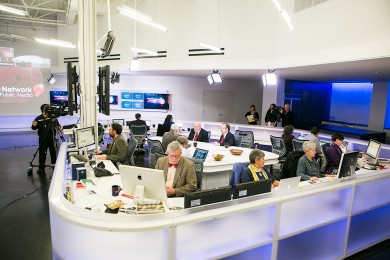 The St. Louis Beacon newsroom is currently located inside Nine would move from the Nine Network building, home of St. Louis’s pubTV station KETC, across the street to St. Louis Public Radio’s newsroom.

St. Louis Public Radio and the St. Louis Beacon, a nonprofit news site, have negotiated a merger agreement that will be taken up by the University of Missouri System’s Board of Curators at its next meeting in November.

The deal potentially caps a long courtship between the two organizations, which began exploring a partnership last October. Negotiations were drawn out as university management examined the academic and research potential of the partnership.

Under the agreement, the news organization created from the merger of St. Louis Public Radio and the Beacon would be one part of what Eby describes as a “three-way partnership” with the j-school and the College of Fine Arts and Communication at the University of Missouri–St. Louis. The Beacon’s staff would move from the Nine Network building, home of St. Louis’s pubTV station KETC, next door to St. Louis Public Radio’s newsroom.

The station and the Beacon would combine their newsgathering and fundraising staffs to employ a total of 60 employees, 35 of which will be devoted to producing news and other content. The organizations have enlisted a branding firm to guide decisions on naming their merged digital operation.

Because vacancies recently opened on the Beacon’s staff, the merger will not require layoffs of redundant positions, Eby said.

Leaders of the two organizations didn’t anticipate that they would end up negotiating a merger when they began exploring partnership possibilities in 2012.  “When we started talking about this last October, we didn’t really envision what it could be in that time,” Eby said. “The term we used was an ‘alliance.’”

Though June 30 was the original deadline for concluding negotiations, it “was an artificial date that was set in order to create urgency and discipline,” said Martin Leifeld, UMSL vice chancellor for advancement.

By involving the Columbia-based j-school in the merger, the university intends to strengthen connections in St. Louis for journalism students and faculty, according to UMSL Chancellor Thomas George.

“There’s a lot of interest in terms of how this could play into research as it relates to the future of nonprofit journalism,” Eby said.

Founded in 2008, the Beacon is funded by a smaller roster of supporters than is St. Louis Public Radio; most of them are major donors, according to managers at the site and UMSL.

Together, the Beacon and St. Louis Public Radio have $2.5 million in verbal pledges to support their merger, and they are currently working to secure the gifts.

An earlier version of this article incorrectly reported that the Nine Network building is across the street from St. Louis Public Radio’s newsroom. The two buildings are next door.
Questions, comments, tips? lapin@current.org
This article was first published in Current, Oct. 7, 2013.
ShareTweet EmailPrint More