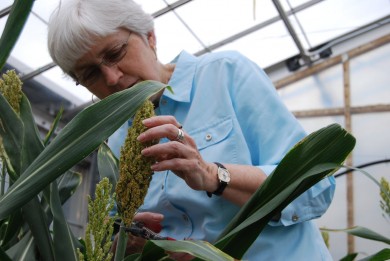 In a Quest special about crop engineering, UC Berkeley biologist Peggy Lemaux describes her research into genetically modify sorghum, a cereal that is a food staple for 300 million people in Africa, to make it more easily digestible. (Photo: Arwen Curry/KQED)

The initiative, which began in 2007 at the San Francisco pubcaster and expanded into a nationwide partnership in 2011, premieres its latest season Oct. 16.

In a Quest special about crop engineering, UC Berkeley biologist Peggy Lemaux describes her research into genetically modify sorghum, a cereal that is a food staple for 300 million people in Africa, to make it more easily digestible. (Photo: Arwen Curry/KQED)

New episodes put a sharper focus on the science of sustainability and introduce a new host, a revamped website and coverage produced by six partner stations on topics such as water, food, energy, climate and biodiversity.

Focus-group research conducted with the participating stations showed that sustainability “really matters to their members,” said Jason Black, executive producer. It “is really the defining topic of our time — the sustainability of life on the planet, and the threats facing the systems that sustain it.”

The new host, journalist and educator Simran Sethi, brings expertise and some buzz to the production. Vanity Fair dubbed her “the environmental messenger,” and the Guardian newspaper named her a “top 10 eco-hero.” Sethi is writing a book about the loss of biodiversity in the food supply.

Black, who has a filmmaking background, originally joined KQED in 2011 as Quest’s business manager and helped the station transition the project through hub piloting, a CPB-backed effort to develop a collaborative production process with other stations. He also co-wrote the proposal for the NSF grant, which was awarded late last year.

The two-year grant covers staff costs for Black and two other full-timers at KQED, as well as six full-time coordinating station producers. In addition, one KQED-based part-timer produces social media, and an education team leader at UNC-TV is working to tie series content to Next Generation Science Standards that were drafted by a consortium of 26 state education agencies.

Since January, partners have produced more than 50 online feature articles, 12 TV segments, four online videos, five radio features and four half-hour programs, with another TV show to debut later this month. Upcoming coverage examines efforts to save Lake Tahoe in Nevada and California, urban farming projects in Milwaukee, a project rebuilding oyster reefs in North Carolina, and fracking in Ohio. For now, partner stations are broadcasting the shows locally, but a larger package of programs may be offered nationally next year.

“Everything we’ve built is scalable, with the idea that adding stations does not add a lot of cost,” Black said, emphasizing that Quest is “actively looking” to recruit more stations. The team wants to expand regional coverage by bringing on partners from the Gulf Coast, Arizona, the Northeast and Florida, he said.

Partner stations are pondering another type of long-term sustainability: their own. Three months ago, Black said, stations assembled a development team that compiled a list of 50 potential funders and developed a template letter to approach foundations.

“We’re also asking the NSF to help us make a broader impact with grant support to deepen station roots into their education communities,” he said.