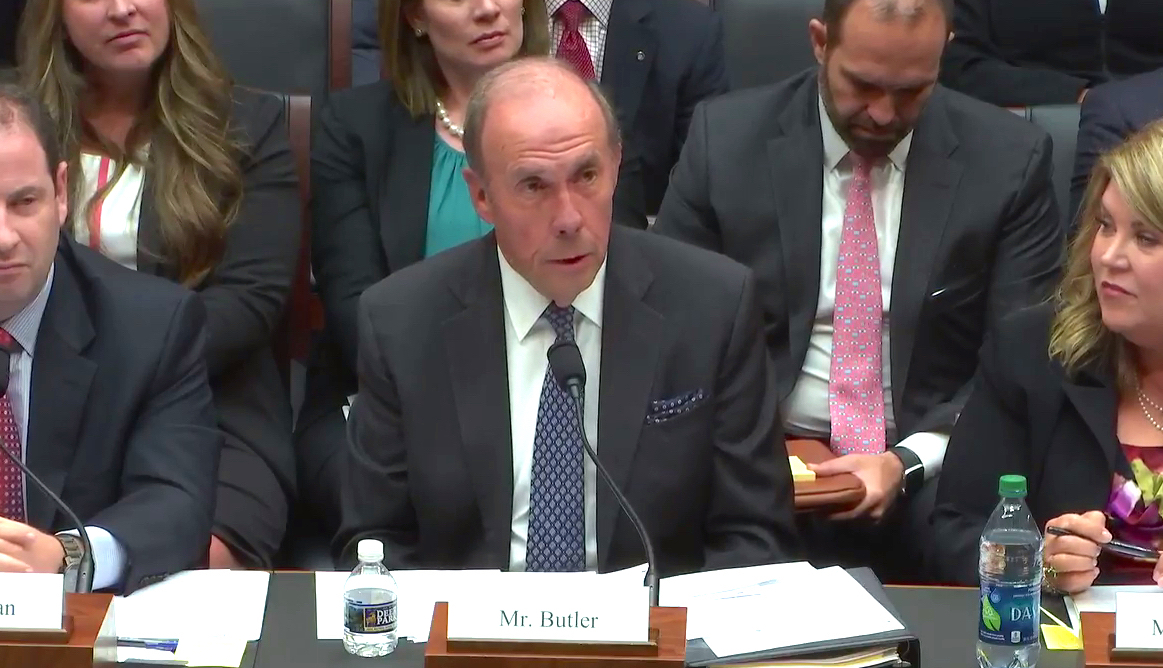 Pat Butler addresses members of the House Subcommittee on Communications and Technology of the Energy and Commerce Committee Thursday.

Pat Butler, president of America’s Public Television Stations, told a Capitol Hill subcommittee Thursday that Congress is “our only hope” for an additional $50 million to help noncommercial stations repack after this year’s spectrum auction.

Public broadcasters have requested $336.6 million from the FCC for repacking, which is affecting 148 public stations. All broadcasters asked for a total of $2.1 billion, exceeding the $1.75 billion initially allocated by Congress for the work.

“As we now know, and as both public and commercial broadcasters predicted at the time, that’s still not enough,” Butler told the House Subcommittee on Communications and Technology of the Energy and Commerce Committee. The FCC “has determined that broadcasters will need another $400 million to be held harmless from the financial effects of this transition, as the law requires,” he said.

The panel convened the informational hearing to examine repacking opportunities, such as the upcoming ATSC 3.0 broadcast protocol, as well as challenges, including the costs of the complex technical work and the deadlines broadcasters face.

Butler cited Kentucky Educational Television as an example of a public broadcaster under financial stress due to the repack. KET has estimated that reconfiguring its 16 transmitters will cost $21 million, “roughly the equivalent of a full year’s operating budget,” he said.

A bill introduced in July by Frank Pallone (D-N.J.), Energy and Commerce Committee ranking member, would provide an additional $1 billion to help broadcasters repack. The legislation would also give the FCC’s Media Bureau authority to lengthen or reschedule the transition periods for repacking, currently scheduled in 10 phases through July 2020.

“The sooner we can get these additional funds, the more likely it is that public television stations can repack on schedule, avoid going dark, and continue the essential services we provide to your constituents throughout the country,” Butler said.

Yvette Clarke (D-N.Y.) asked Butler why “getting the repack right,” including financing, is important to public broadcasters.

“If we go dark, all of our work in education, public safety and civic leadership is gone.” — APTS CEO Pat Butler

Butler said that because many public TV stations “don’t have a lot of capital sitting around,” the financial risk from repack work “is almost existential” to the system.

Additional funding also needs to be secured soon, Butler noted. Almost half of public TV stations are state or university licensees, which are subject to specific budget cycles, he said.

“They have no capability on their own to raise this kind of money,” Butler said. “Congress needs to act, or half of our stations will be floundering without that certainty. If we go dark, all of our work in education, public safety and civic leadership is gone.”

Fourteen public stations need to repack before Nov. 30, 2018, Butler said; 135 stations need to complete the process “well before” the 39-month deadline due to the FCC’s 10-phase schedule. “So this will have a very serious effect on stations due to challenges of raising capital funding,” he said.

Butler said public TV services “very young and much older audiences, two populations that need all the consumer education they can get.” He noted that there is “so much room for confusion” in the repack, which will change channels nationwide. “So consumer education is extremely important” for public TV viewers, Butler said.