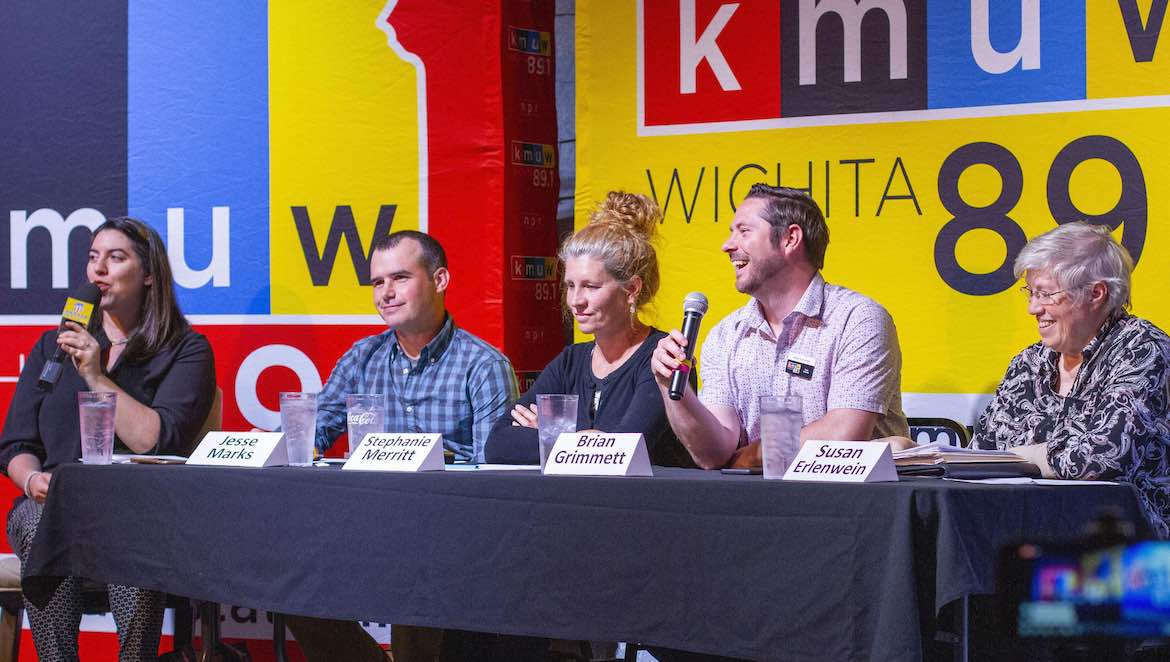 This kicks off a series of profiles of innovative and replicable projects submitted to Local That Works, the annual contest highlighting local content and engagement strategies of public media and nonprofit news organizations. Engage ICT: “Democracy on Tap,” an event series created by Sarah Jane Crespo at KMUW in Wichita, Kansas, competed as one of four finalists in the 2019 contest.

What is Engage ICT: “Democracy on Tap”?

A series of free events that bring a happy-hour vibe to panel discussions of issues that shape daily life in Wichita, Kansas. KMUW engagement director Sarah Jane Crespo developed the series as a “new town square” and branded it with “ICT,” the city’s airport code, as a signal of local pride and identity. “We’re a big little city with real issues and ambitions,” says Crespo.

The monthly series launched in 2015 as discussion forums for issues that would be debated and decided during the 2016 elections — including health care, education and the environment. The range of topics has since broadened to include global and hyper-local issues — from climate change to master plans for community redevelopment.

Engage ICT has a loyal following, drawing crowds of 60 to 120 people. Events hosted in bars and pubs, where attendees can enjoy appetizers and purchase adult beverages, tend to draw the biggest audiences.

What big idea inspired KMUW to create this?

While taking a class on public administration, Crespo learned about “wicked problems” that are complex and difficult to solve. She realized that public radio stations could help tackle such problems by bringing people together to discuss them. In mid-2014, she convinced new GM Debra Fraser to let her develop ideas for the station to “do more.”

All events are streamed on Facebook Live, and the station uses audio, video and pre-recorded interviews with panelists to make sure the discussion is engaging and educational. At the end of each moderated panel discussion, the floor opens for audience members to ask questions.

How does KMUW fund and staff this?

Crespo works on Engage ICT about 20 hours per month and is supported by a three-person, part-time events team. Underwriting trades cover costs of on-site support, such as food service.

What broadcast content does the station produce from these events?

In 2019, KMUW began producing coverage of some Engage ICT events, including a mayoral debate that was broadcast live. The station also hosted a broadcast of “1A Across America” in partnership with WAMU in Washington, D.C., and producers of 1A. For the event, Joshua Johnson, then host of 1A, moderated a discussion of women in politics and the GOP. The program aired nationally in October 2019 as part of 1A’s CPB-funded project to bring more local and regional perspectives to national coverage.

This year, KMUW plans to start recording the discussions for hour-long radio broadcasts that will air about a week after each live event.

How does KMUW plan to improve on what’s been accomplished so far?

Crespo wants to build attendance beyond KMUW listeners, who make up a large contingent of regular attendees. She’s tried different marketing strategies, but results to date have been mixed. “Over time, we realized that the topics we choose made a lot of difference in who attended,” she says. Attracting new people to events “either requires more help from our partners or more marketing dollars.”

Crespo’s original vision for tackling “wicked problems” was to design community engagement as a “three-legged stool” built on three concepts — Inform, Listen, Action. “Engage ICT: Democracy on Tap” has helped KMUW realize the “inform” part of that vision. The station has plans for remaining “legs” and plans to initiate them this year, she says.

KMUW-FM is a 100,000-watt, mixed -ormat NPR station licensed to Wichita State University. In 2018, it operated on an expense budget of $3.1 million, according to its FY2018 annual financial report, and employed a full-time staff of 21. Wichita is the #105 ranked Nielsen radio market.

This was adapted from KMUW’s project summary and Crespo’s presentation during the 2019 Public Radio Super Regional conference. You can find more ideas for replicable content and engagement strategies by exploring our Local That Works database.