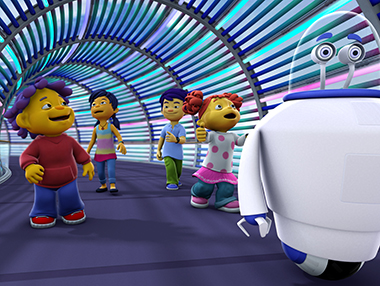 CPTV Kids, offered as a free app through Apple’s iTunes store, is a gateway for purchasing individual episodes of TV programs as well as interactive readers and e-books. Prices for downloads range from $1.99 to $5.99. It was developed and launched in partnership with Ruckus Media Group, a web-development company that owns limited digital-distribution rights to children’s properties from commercial and public TV.

The partners initially hoped for participation from public TV distributors and local broadcasters, angling to expand their library of noncommercial content by adding PBS Kids titles. In exchange for leveraging their station brands and promotional capacity, local pubcasters would receive cuts of the download revenues, as well as data about mobile users who agree to be contacted by the station.

But with no commitments after several months of courting other pubcasters, CPTV Kids launched Aug. 20 in iTunes without any pubTV partners. PBS has adopted a wait-and-see stance to the venture, and two of three top stations said to be considering the partnership told Current they have declined.

Jerry Franklin, president of the Connecticut Public Broadcasting Network, which operates CPTV, began pitching the app to pubcasting colleagues in the spring; he said rollout had to move forward. “We can’t wait,” he said. “We run a state network, but we need to move quickly. We have to be nimble.”

During its first two months in Apple’s iTunes store, CPTV Kids has been downloaded more than 2,000 times. So far it has generated little revenue, according to Franklin. But he expects that to change. For the app’s first year in the marketplace, CPTV is projecting revenues of more than $50,000 from download sales and $100,000 from corporate underwriting. CPTV already has recruited a regional grocery chain, Big Y, as a sponsor.

Franklin estimated that 10 percent of the 114 titles currently offered through CPTV Kids are affiliated with public TV.

The titles are split among 20 different television series as well as some children’s books. Of the TV shows, five are linked to public TV, including Sid the Science Kid, Curious George and Jim Henson’s Pajanimals, a series that airs on PBS Kids Sprout, the digital cable channel in which PBS and its top kiddie TV producers hold interests. Curious George, a popular book and PBS Kids show, offers two “ReadAlong” e-books.

Commercial TV offerings on CPTV Kids include e-books from My Little Pony and Transformers Prime, toy franchises marketed in the U.S. by Hasbro; Kidz Bop, a music title publishing kid-friendly versions of pop songs; and the Christian-themed series VeggieTales. Programs from family entertainment and toy companies such as SeaWorld, Tonka and Crayola are also available for download.

Franklin said he wanted only public TV titles on the app, but so far has been unable to convince PBS to make more of them available. “We wanted it to be exclusively PBS [programs], but we couldn’t get the clearance,” Franklin said.

PBS spokesperson Jan McNamara said the network is “keeping an open mind” about the app, but declined to elaborate further.

PBS Kids already has a strong presence on iTunes: Its own free video app for iPad and iPhone offers more than 1,000 videos and the option to look up broadcast times for kids’ TV shows on local station schedules. Several PBS Kids programs, including Curious George and Sid the Science Kid, also have their own dedicated apps. These apps are co-branded with PBS Kids, and many are offered through both iTunes and Google Play. Newer titles, such as Peg + Cat and Daniel Tiger’s Neighborhood, have also rolled out apps with PBS Kids.

In May, when CPTV first unveiled the digital venture, Franklin described PBS’s participation in the Ruckus Media partnership as essential to the app’s success. But he acknowledges now that the state network is under some financial pressure to pursue this venture.

The number of active donors in CPTV’s database has dropped 20 percent over the past five years, according to Dean Orton, CPBN c.o.o., and the mobile venture is a key element of the state network’s strategy to reverse that decline. With the usage data provided by the app, CPTV intends to cultivate a new generation of members and donors.

Among mobile users who have downloaded CPTV Kids, more than 90 percent have agreed to receive communications from the state pubcaster, according to Franklin.

‘You’ve got to charge something’

Under partnerships offered to other local pubcasters, each would place their localized kids brand on a customized version of the app and offer downloads of only those Ruckus Media titles that the station chooses. In exchange for co-branding with the app and promoting it to local viewers, the station would receive a share of revenues and data on users who agree to be contacted.

Under the current business model, the supporting station and Ruckus split about 40 percent of the revenue earned from each download; program license-holders receive 30 percent to 40 percent; and Apple gets a 30 percent cut.

Local pubcasters have expressed reservations about the app’s “pay-to-play” distribution method, according to Franklin, who steadfastly supports the business model.

“You’ve got to charge something,” he said. “We’re not going to give it away. That’s one of the [habits] we need to break, is to stop giving away our properties.”

Franklin acknowledged that local pubcasters also aren’t so keen to link their educational children’s brand to commercial TV titles. “There’s some resistance within the PBS family about having commercial properties tied so closely to PBS Kids,” he said.

Franklin described three major market stations as “ready to launch” the app in their markets, pending PBS support. But representatives from two of the stations — New York’s WNET and Seattle’s KCTS — said they had decided not to participate and declined to discuss why. WTTW in Chicago is still evaluating whether to sign on, according to Julia Maish, spokesperson.

Orton downplayed the impact of pubcasters’ wary responses to the mobile venture. The state network’s outreach to other pubcasters has so far been limited, and station participation won’t make or break the app’s success, he said.

CPTV’s expansion into mobile revenues will be implemented in phases, Orton said. “At the end of the day, if we never roll it out to anybody, we’re going to keep playing in this space,” he said, adding that the app is one part of a larger mobile push for CPTV.

“We’re not just doing it for the download-to-own revenue,” Orton said. “That’s just a component. We think this opens up significant underwriting and educational and membership [opportunities]. We see a lot of advantages on multiple levels.”

Franklin agrees that the venture remains promising without pubTV partners. “It could still be successful here in Connecticut, just on a much smaller scale,” he said. But he went on to emphasize: “This really should be a national rollout.”

CPTV is also planning a general-interest download-to-own app focusing on locally produced content. Its launch date has not yet been set.