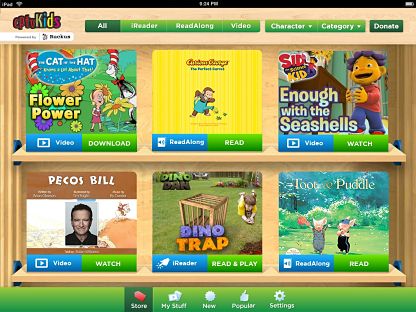 : CPTV’s customized app, displayed on an iPad, will sell downloads of PBS Kids shows such as The Cat in the Hat Knows a Lot About That! and Sid the Science Kid. (Photo: Courtesy CTIH Productions)

CPTV’s customized app, displayed on an iPad, will sell downloads of PBS Kids shows such as The Cat in the Hat Knows a Lot About That! and Sid the Science Kid. (Photo: CPTV)

Connecticut Public Television has joined with a digital media company in rolling out a new mobile platform that will offer digital downloads of children’s programs. It’s working to bring other local stations, and possibly PBS, into the venture.

The platform is to be offered for free through Apple’s iTunes store in June. Its users will pay $1.99–$3.99 to download episodes of shows from both public TV and commercial channels.

Ruckus Media Group, CPTV’s partner in creating the platform, specializes in building interactive applications for children’s programs. It holds digital distribution rights to the PBS Kids shows The Cat in the Hat Knows a Lot About That! and Sid the Science Kid, and is talking with PBS officials about acquiring rights to more programs. Ruckus also distributes commercial TV properties such as My Little Pony and Transformers, both owned by the children’s toy company Hasbro, and partners with companies such as Crayola to create downloadable media centered on their products.

The partners were to unveil their plans May 13, in advance of the PBS Showcase meeting in Miami, where they’ll be meeting with PBS and station execs to discuss the partnership. As with the rollout of the PBS Kids Sprout channel in 2005, the partnership leverages public TV’s reputation for trusted children’s content to introduce a new digital service.

“We’re hoping that PBS will join forces with us, because we clearly need PBS,” said Jerry Franklin, CPTV president. “It strengthens it dramatically. And we would hope that through PBS and their member station relations, we can figure this out and go forward together.”

CPTV had been exploring ways to reduce its reliance on pledge income and looked to digital media revenues as a way to cut down on station pledge time, Franklin said. He came to believe that pubTV needs to move more quickly to stake out space on mobile and tablet platforms if it is to adjust to the changing habits of its audiences.

“My 30-year-old daughter and her 4-year-old daughter, they don’t watch television the way my daughter watched it when she was 5 years old,” Franklin said. “My 4-year-old [granddaughter] has her own little tablet now [and is] just as comfortable with her little iPad as I am with the telephone.”

Ruckus President Rick Richter, a former publisher in Simon & Schuster’s Children’s Division, said the company has invested millions of dollars in developing the platform and signed a multiyear renewable contract with CPTV to serve as the presenting station. CPTV, which brought Barney & Friends to the PBS system in 1992, will produce promotional spots and toolkits for other stations that join the partnership. Richter declined to specify the value of the agreement for competitive reasons; Ruckus is a for-profit media company.

Richter is also a member of the CPTV board of trustees, but recuses himself from decisions and votes having to do with the partnership.

CPTV has drawn from its operating budget and other private sources to invest in the new platform, Franklin said. He also declined to share details.

In recruiting additional public TV partners for the launch, Ruckus and CPTV offer to create apps that will be locally customized to incorporate the participating station’s brand. Each station would promote the localized app to its own viewership, and can decide for itself how to brand it. (Connecticut chose “CPTV Kids.”)

Stations would not be compensated for the promotional spots running on their air, but they will receive a share of the revenues from online purchases. Stations and Ruckus would split about 40 percent of the revenue earned from each download; program license-holders receive 30–40 percent; and Apple gets its 30 percent cut.

Each station would be able to decide which shows in the Ruckus library it wants to sell.

At launch the app will offer 10–12 shows as paid downloads, including episodes of Cat and Sid. More PBS Kids titles will be added as Ruckus acquires the rights to them. Some interactive stories and narrated e-books will also be available at launch.

Initially the apps will be exclusive to the iPad and iPhone, though Ruckus plans to expand to Android platforms by the end of the year, according to Richter. The company also seeks to broaden its content offerings by adding general audience programs to the platform.

Franklin has already approached pubTV stations in Chicago, Philadelphia and Seattle about joining the marketing partnership.

The apps will not distinguish between programs produced for public and commercial media, so CPTV’s logo — and potentially those of other stations — will be linked to those of shows from commercial TV, but only if individual stations choose to sell them within their localized app.

Franklin has no reservations about offering all of Ruckus’ titles within CPTV’s app.  “That doesn’t bother me,” Franklin said. “I’ve got a responsibility to make certain I can meet a payroll in two weeks, and whatever monies that are generated from this I plow back into my public media operation. And I’m very comfortable with that.”

Allowing each station to curate the programs offered under its brand will help to reinforce the trust that parents and other audiences have for public TV children’s programming, he said.

“People will trust Connecticut Public Television that this property that we’re asking you to spend $3.99 [on] is a good property — that you don’t have to worry about it, you can trust us,” he said. “Just because it hasn’t been on public television, that’s not a concern to me.”

Most of the children’s programs offered by Ruckus will be available on other digital platforms as well: Episodes of Sid the Science Kid and The Cat in the Hat, for example, will be available for $1.99 on iTunes. Richter said the goal is for pubTV viewers to choose to “purchase with a purpose” by supporting their station.

“It’s part of the competitive landscape. We just have to fight to get our share,” Franklin said.

Jason Root, chief content officer at Ruckus, said the wide variety of program offerings within the platform will help local broadcasters “foster their own relationships and their member engagement.”

“There is a school of thought that says they are furthering their relationship with their members” by providing commercial as well as pubTV content, Root said. “They’re providing this treasure trove of great content which is developmentally appropriate, which is good for their kids. . . which will not necessarily all be [from] PBS.”

CPTV and Ruckus recognize the value that PBS’s participation could bring to their mobile venture, and their execs note that the mobile-focused approach they’ve taken complements the user experience offered by PBS Kids. Since Ruckus focuses on paid downloads, users don’t have to be connected to the Internet to watch the programs, Richter said. To access PBS Kids content on a mobile device, users must be connected to the web and have the necessary bandwidth to stream it.

Additionally, CPTV’s involvement as the exclusive presenting station of the app’s Ruckus content applies only to public broadcasting. Ruckus does have the option to pursue similar arrangements with commercial programmers, but Richter insisted that Ruckus is “laser-focused” on CPTV.

“I can tell you that in the short term or even the medium term we don’t have any plans to broaden this,” he said. “We want to be a service organization for PBS and affiliate stations and CPTV. I suppose there are lots of what-ifs you could put in this equation, but that’s our focus right now.”