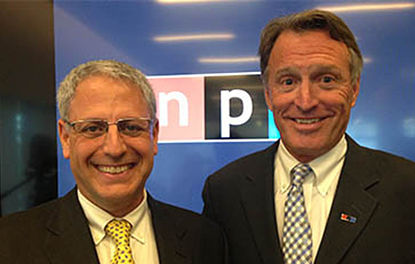 NPR girded for a difficult leadership transition Sept. 13 when its board authorized management to trim the network’s workforce by up to 10 percent through voluntary buyouts.

The downsizing was part of a financial plan crafted by outgoing President Gary Knell, who will soon be handing the reins to an interim chief executive appointed by the board — Vice Chair Paul Haaga.

Haaga, a California-based lawyer, financier and philanthropist who was elected to the board as a public director in 2011, begins serving as interim president Sept. 30 while a board-appointed search committee works to recruit Knell’s permanent successor.

“Paul [Haaga] is an extraordinary supporter of NPR, and he has been intimately involved in the budget process,” said NPR Board of Directors Chair Kit Jensen, c.o.o. of Cleveland’s ideastream. “He also brings nonprofit leadership and business acumen to the role.”

By authorizing staff buyouts, the NPR board signaled that it intends to follow through on Knell’s pledge to return the network to a balanced budget by fiscal 2015. Though the decision to release longtime employees clouded the Sept. 13 meeting at NPR headquarters, the mood had been celebratory on Sept. 12 as staff and board members cheered the financial performance of NPR’s development and corporate sponsorship teams.

“I’ve never felt the executive support like we have now,” said Stephen Moss, president and c.e.o. at National Public Media, after reporting a healthy rebound of underwriting sales. “There is a real revenue culture in place.”

While Knell has been credited with stabilizing NPR and steering it out of the political quagmire left by his predecessor, his management has drawn lukewarm reviews from member stations and employees, according to recent research conducted by NPR, including the first-ever independent survey of its employees.

NPR leadership stated its intention to bring the organization’s budget back into balance when Knell arrived as the new chief executive in 2011, yet the scope of the workforce reduction required under his plan came as a surprise to many observers.

The goal to reduce staffing by 10 percent is deeper than that imposed in 2008, when NPR cancelled two midday series and eliminated 64 jobs through layoffs, including those of popular hosts and correspondents. Now the network is preparing to release up to 80 employees with three or more years of seniority.

Buyout offers were to be sent to eligible employees by Sept. 20, according to Anna Christopher Bross, spokeswoman. Each must decide whether to take the offer by Oct. 11. If the network’s goal for workforce reduction isn’t met, leaders will consider imposing layoffs, she said.

Expected savings from the staff reduction weren’t discussed publicly, but they were included in what board members described as a “balanced budget amendment” approved along with management’s fiscal 2014 budget.

The network anticipates that expenses will outpace revenues by $6.1 million in the fiscal year that begins Oct. 1. Specifically, management’s spending plan projects revenues of $178.1 million and $183 million in expenses, a shortfall of 3 percent.

The pledge to balance the books won’t be fulfilled until fiscal 2015, and the deficit projected for fiscal 2014 is twice the size of the shortfall that had been anticipated for fiscal 2013, which closes Sept. 30. Record-setting fundraising performance by NPR’s revved-up development team cut the $6.1 million shortfall that had been projected for this year in half. Management now expects to close fiscal 2013 with an operating deficit of $3 million.

NPR’s development staff shared news of the turnaround during a Sept. 12 meeting of the board’s resource development committee. Fiscal 2013 has been a year of “change and progress and accomplishment,” said Monique Hanson, chief development officer. The year started out slow, but by late July revenues from individual and institutional gifts had grown $25,000 and $1 million, respectively.

Moss reported a dramatic rebound in sponsorship revenues, which brought in $6 million in September alone. “We’re finishing the fourth quarter very strongly,” he said. “And, based on how September ends, it will be the best fundraising year ever.”

In what may likely be his last report to the board, Knell said NPR had embraced a “revenue culture” that recognizes the importance of fundraising while respecting the inherent boundaries of journalism and being a nonprofit organization.

But another report delivered to the NPR board this month suggested that, outside the boardroom, the cultural shift had impaired relationships with other key stakeholders: namely, NPR member stations and their staffs.

Only 85 stations responded to the network’s latest member survey — the lowest number ever, according to Loren Mayor, senior v.p. of strategy, who presented the results to the board’s human resources committee. Stations are highly satisfied with how NPR represents them in regulatory, copyright, legislative and legal matters, ranking these services 8.3 on a scale of 10. But when asked about NPR’s engagement with stations, members scored NPR at 5.9 out of 10, well below the 7.5 management had set as its goal.

When asked to rate NPR’s responsiveness to their feedback and their attentiveness to small stations, scores fell to as low as 5.1 out of 10.

“There is a high regard for the staff,” Mayor said. “But small stations felt like NPR is paying too much attention to the big stations. That was a very dominant theme in the responses.”

But in NPR’s first-ever employee survey to be conducted by a third-party organization, 677 of the 848 employees shared their views. The survey period ended Aug. 30, 11 days after Knell announced his departure for National Geographic, and researchers presented the results to NPR Sept. 10.

NPR employees were overwhelmingly positive when asked about their immediate supervisors, workspace and their time at NPR, giving the news organization a 92 percent score, Mayor said.

But when asked about NPR’s commitment to transparency and upper management’s decision-making process, the scores dropped significantly, she said.

All of the data from the survey scores weren’t yet available to NPR, she said, but staff’s negative views of senior management lowered overall satisfaction scores to 4.2 out of 7. Management’s goal had been to hit a 5 out of 7.