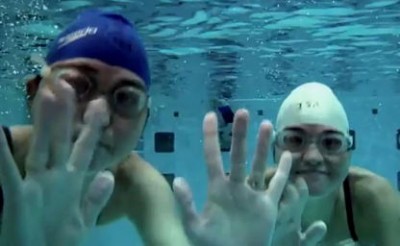 As prospects for 'SoCal Connected' to return to KCET have dimmed, the station promoted new offerings including the documentary 'The Power of Two.' (Photo: Twin Triumph Productions)

As prospects for ‘SoCal Connected’ to return to KCET have dimmed, the station promoted new offerings including the documentary ‘The Power of Two.’ (Photo: Twin Triumph Productions)

KCETLink, the latest incarnation of the Los Angeles public TV station determined to define its own vision of public service media for the digital era, laid off 22 full-time employees April 19, signaling another change of course in its search for financial stability.

The downsizing was part of a restructuring of two public TV organizations that merged in January: KCET, the station that split from PBS in January 2011 and vowed to create an innovative new model for local public TV service; and Link Media, the nonprofit company that operates the noncommercial satellite TV channel Link TV. When the merger was unveiled in October, executives from both companies warned that jobs would be cut as they consolidated their operations, but said in the long run both would be strengthened.

Although KCETLink officials declined to provide details about how the job cuts were spread across the merged company or how content would be affected, the departure of one top executive — Bret Marcus, head of KCET’s acclaimed local news program SoCal Connected — signaled that the station’s flagship program may be on permanent hiatus, or, as Marcus suggested in an interview with Current, could possibly move elsewhere.

KCETLink expects to save $1 million through the job cuts, according to a financial statement from June 2012. But it’s unclear whether the savings will be enough to shore up KCET’s financial position.

In audited financial statements for last fiscal year, which ended June 30, 2012, KCET posted a $7.4 million loss. Its assets of $40.7 million included only $80,714 in cash or in investments that could be quickly converted to cash.

Last June 30 marked the conclusion of KCET’s first fiscal year operating outside of the PBS system. At the time the station had already begun discussing a potential merger with Link Media, according to Paul Mason, chief strategy officer of LinkTV (Current, Oct. 22, 2012).

The millions in red ink last year were a precipitous fall for KCET, which had closed fiscal 2011 with $1.5 million in cash or cash equivalents. The financial period ending June 30, 2011, included KCET’s last months as a PBS station, when the Los Angeles pubcaster earned $56.4 million in revenue and support.

Its 2011 balance sheet had been bolstered by a $28.7 million net gain from the $45 million sale of its historic Sunset Boulevard studio to the Church of Scientology in April 2011. Donations and grants to KCET totaled $22.2 million in fiscal 2011.

According to KCET’s 2012 audited financial statements, proceeds from the sale of its Hollywood studios had paid off debt on the property and costs associated with building new studios at a leased high-rise facility in Burbank.

But in the year-end financial report, station management expressed confidence that their merger with Link TV would put the restructured organization into the black. Post-merger, KCET said senior management of both organizations planned about $2 million in cuts to LinkTV’s staffing and other expenses.

In a note included in the financial report, KCET management said that Link TV had 50 or so major donors nationwide who contribute between $5,000 and $100,000. Link TV had never sought corporate sponsors, and KCET described this as a “significant” untapped revenue stream that could benefit the merged organization.

“Management believes the steps we have taken since our departure from PBS set the stage for solidifying our financial health, generating positive cash flow by fiscal 2014 while continuing to serve the public,” KCET said.

Los Angeles media watchers first revealed that Marcus had been among the KCET executives to lose their jobs, and reported it as yet another sign that SoCal Connected, as LA Observed blogger Kevin Roderick wrote, “is finished.”

Marcus joined KCET in 2006 when it was the primary PBS station in Los Angeles and looking to leverage its track record in producing news shows for statewide and local audiences into a single high-impact series — the show that became SoCal Connected.

The programcut a wide investigative swath, exposing wrongdoing at the Los Angeles Housing Authority and illegal massage parlors; taking on massive subjects like global warming and local scandals such as a sweetheart deal over electronic billboards.

Along the way, it won three duPont-Columbia Awards — half of the six awarded to KCET over its 50-year history — along with a Peabody, 17 Emmys, 41 Los Angeles Press Club Awards (including its Public Service Award last year), two Headliners and two Murrows.

“I am a big believer in the fact that every station, whether commercial or public, has to have a signature program,” he told Current in 2010. “It shows the station’s priorities. It demonstrates its citizenship and commitment to the community.”

Local media noticed when it went off the air last spring earlier than expected. SoCal Connected made a comeback in September, ramping back up to weeknight production with pubradio journalist Madeleine Brand as co-host.

Then KCETLink put SoCal Connected on hiatus again in March, and handed a pink slip to Marcus April 19. A veteran of both NBC and ABC news, Marcus was reflective about his run as KCET’s chief content officer and top news producer. “I feel like I had a great run there,” he said.

“I’m very proud of the program,” Marcus told Current, referring to SoCal Connected.“It’s clearly the most recognized program in Southern California, without a doubt.”

He hinted that the team behind SoCal Connected wouldn’t hesitate to make a run on another local outlet. “The staff is eager to take their good work somewhere else,” he said.

As KCETLink cut its workforce, the official announcement pointed to a new programming focus — on “transmedia programming opportunities” for viewing on web and mobile devices.

“These are challenging and transformational times that require us to make difficult financial and operational decisions for the continued health of the organization in order to create a public media organization that can grow in the 21st century,” said Jerome in the April 19 announcement.

The announcement cited examples of transmedia projects, such as the recently released World News mobile app; Stand Up Planet! a multi-platform comedy/reality series about global development, currently in production in India and South Africa; and two newly acquired films, Shadows of Liberty and The Power of Two, “both heavily supported by digital engagement and available on multiple screens.”

Jerome didn’t respond to an interview request, and a spokesperson declined to disclose any information beyond the number of full-time job eliminations. Five vacant positions also are not being filled, said Ariel Carpenter, KCET spokesperson, bringing total staffers currently at KCETLink to 100.