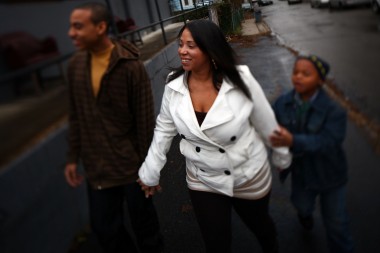 Next week NPR listeners will hear five voices from the past that may have a familiar ring. They’re a bit weathered with age but still share personal stories about navigating extraordinary twists in their lives.

After audio diarist Melissa, center, told producer Joe Richman about the challenges of her day-to-day life as an adult, he gave her another recorder. (Photo: David Gilkey/NPR)

As listeners will hear, the audio diarists have gone through changes that might seem unexpected. But they’re also still dealing with the same struggles that beset them as teens.

In 1996, high-school football player Frankie Lewchuk described his family’s shocking discovery that his father had been running from the law for 15 years. In his new diary, Lewchuk’s father is out of prison, but Lewchuk has gone through a rough patch himself that also put him behind bars: meth addiction. He’s come out the other side all right, but his parents succumb to tears when they talk with him about his tangle with the drug.

Another diarist, identified only by his first name, Juan, recorded his 1996 diary shortly after entering the U.S. illegally from Mexico. He’s since started a family and become a successful plumber, but he remains undocumented.

“I’ve been here so long, I’m one of you,” Juan tells listeners. Yet his daughter still fears that he could be deported, and in a conversation that he recorded, he strives to reassure her.

“They were into just doing the stories,” producer Joe Richman says of his diarists. “But on a personal level, we were reconnecting and solidifying relationships that had started 17 years ago.”

At first, Richman had planned for the original Teenage Diaries to consist of regular check-ins with a lineup of teens, somewhat similar to director Michael Apted’s Seven Up series. But that approach yielded stories that felt too small, he says. So to find larger narrative arcs, he zeroed in on teenagers and devoted one or two ATC segments to each.

That CPB-supported effort later developed into Radio Diaries, Richman’s nonprofit production house, which has provided a vehicle for him and his staff to move beyond teens and explore a wide range of other subjects. Teenage Diaries won many awards and inspired other reporters. On the radio production website Transom.org, NPR and This American Life reporter Chana Joffe-Walt wrote that “Joe Richman’s non-narrated, intimate Radio Diaries are what first got me excited about radio, and I’ve always wanted to do pieces like them.”

In the years following his first run of diaries, Richman kept in touch with some teens but lost contact with others. One, teen mom Melissa, didn’t just drift away — she disappeared. Not even her social worker knew where she or her son had gone, and Richman assumed that her life had taken a bad turn.

Then he received an email from Melissa that opened with, “I don’t know if you remember me.” Her son had been diagnosed with a life-threatening disease, and her life fell apart. She lost her job and apartment, and in her email she filled in Richman on the tumultuous events. He gave her a recorder, and Teenage Diaries Revisited was born.

Richman found that coaxing stories out of the diarists as adults was more difficult than when he had worked with them before. “As teens, they have so much time to record, and everything they say is important,” he says. “Sometimes it can be harder to get people to record in a way that feels as free as they did when they were teens.”

An upside this time around, at least for the diarists, was that Richman gave them small flash recorders instead of the cumbersome Marantz cassette decks they hauled around in 1996. They liked the new gear, but Richman wasn’t as enthusiastic.

“I miss the tape recorders — nothing bad ever happened with them,” he says. “We went through a lot more technical difficulties this time around. So many more things can get messed up.”

Richman is also working to cultivate a new generation of teen diarists in collaboration with the multimedia-storytelling website Cowbird. Teens can submit personal stories via the site, and two winners will be chosen to produce pieces with help from Radio Diaries. The resulting productions will air on ATC next year.