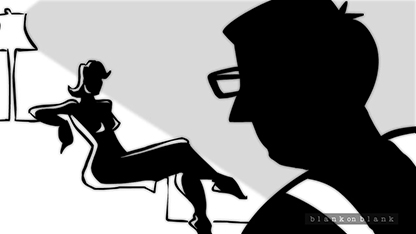 Mike Rugnetta, the young and exuberant host of PBS’s year-old hit web series Idea Channel, made a name for himself on the Internet by enthusiastically exploring a wide range of the cultural spectrum. On his program, he applies philosophy and critical theory to appraise everything from the musical genre of dubstep to actor Nicolas Cage.

Yet there is one part of the cultural landscape Rugnetta has little interest in: over-the-air PBS.

“I grew up watching Mister Rogers and Sesame Street and Bob Ross and all of those other classic programs,” Rugnetta said. But, as he entered his teenage years and found his interests drifting away from PBS’s broadcast programming, he stopped watching. In fact, he developed “a dislike for the broadcast industry in general,” preferring the online universe of user-generated content. He says the broadcast signal in his Brooklyn apartment is too weak to pick up WNET, New York’s flagship PBS station, though he does watch some PBS programs online.

Rugnetta, who is in his late 20s, warmed up an audience of digital technologists and advocates for PBS President Paula Kerger during her March 10 talk at the South by Southwest Interactive Festival in Austin, Texas. Later that evening, he introduced Peter Sagal, host of NPR’s Wait, Wait… Don’t Tell Me! and the upcoming PBS series Constitution USA, at the official PBS SXSW party.

Rugnetta is a new breed of public media star: His show appears only online, and he is perfectly happy to keep it that way.

Rugnetta’s preference for consuming and delivering his media online is exactly what PBS Digital chief Jason Seiken had in mind when he established the production unit specializing in web-original videos. PBS Digital Studios landed its first viral hit last summer with a remix of Mister Rogers’ Neighborhood, distributed via YouTube, but its content offerings extend beyond nostalgia for iconic PBS stars of the past.

Videos produced by Digital Studios target young adults who, like Rugnetta, outgrew PBS children’s programming and moved on to explore the web and the interactive user-generated content that it enabled. Both PBS and its member stations have to find ways to lure them back — and keep them watching — on their terms.

PBS’s latest tactics for doing that, and for building station capacity to engage online audiences, were on display at SXSW, where Rugnetta served as a cultural ambassador between both worlds.

A 2010 grant from the Anne Ray Charitable Trust provided seed money for two online arts programs — Off Book and Idea Channel — that would become the foundation for the expansion into web-only production, but the name PBS Digital Studios belies the small size of the team behind it. Seiken told Current that only “one-and-a-half” staffers work in the unit. Yet Digital Studios has launched 17 web-original programs to date, many through acquisitions from stations or other producers of web content.

The studio, funded out of the PBS Interactive operating budget, began experimenting with online video in 2011 with the documentary series Off Book, which profiles innovations in the arts in episodes of less than 10 minutes in length. Rugnetta was approached by Digital Studios to develop Idea Channel after he appeared on an episode of Off Book to discuss Internet memes.

Though Seiken declined to share financial details of Digital Studios’ production model, he said the average cost-per-minute for production of a web series is one-tenth the cost of broadcast content.

The YouTube page for PBS Digital Studios, which launched in May 2012, has nearly 40,000 subscribers, and its videos have been viewed a combined total of 15.5 million times. At close to 180,000 subscribers, Rugnetta’s Idea Channel has the largest dedicated audience of the online shows; its subscribers outnumber by 12,000 those who follow PBS’s official YouTube channel, which presents promotional content for broadcast programs.

The Icons Remixed channel, which crafts songs around repurposed clips of classic PBS stars using Auto-Tune computer software, has proven to be Digital Studios’ biggest viral success. The Mister Rogers’ Neighborhood remix was promoted on YouTube’s homepage upon its release in June 2012 and has totaled 8.4 million views to date; follow-ups starring Bob Ross and Julia Child have reached 4.8 million and 1.4 million views, respectively.

But Digital Studios also has credibility with those looking to do something different. “They have great traction with incubating new series,” said David Gerlach, creator of the multimedia nonprofit Blank on Blank. Gerlach, whose project was selected as a 2011 Knight Foundation News Challenge finalist but not chosen as a grantee, opted to partner with Digital Studios to make Blank on Blank one of its newest shows.

In fact, since early this year, Digital Studios has been introducing new series at a rapid clip. In addition to Blank on Blank, the channel also launched Beat Making Lab, a chronicle of a project by music producer DJ Apple Juice Kid and renowned academic Pierce Freelon to create a global community of self-produced musicians; Bon Appétempt, a cooking-and-lifestyle program based on the popular blog by Amelia Morris; and Coma Niddy University, a series of raps about science-related topics from science educator Mike Wilson.

Having marked the one-year anniversary of the launch of their YouTube channel, Seiken and Digital Studios Senior Director Matt Graham hope to expand the range of content even further, including into original history programming. Many popular YouTube brands have an interest in working with PBS, they said, even though the network is able to offer little in the way of funding.

Seiken told Current a big part of the network’s Digital Studios strategy “is to give those 20- and 30- and 40-somethings a way to reconnect with public television . . . put public television in the front of their mindset rather than in the back.”

In pursuit of PBS Digital’s goals to engage a new generation of viewers and build digital foot traffic, Seiken and Graham have developed tactics for helping local stations do the same, including assisting with promotion and distribution of online content.

This year they launched a Digital Entrepreneurs Grant to help stations develop web-original video. To qualify for the funding, stations must demonstrate how their proposed web production “will support their long- and/or short-term station content and business efforts,” according to the request for proposals. Digital Studios will award grants of $10,000 each to up to 10 stations. The deadline for applications is May 1.

Seiken is positioning Digital Studios to be “a catalyst and an enabler” for stations in developing low-cost online video content. Yet Graham acknowledged that it’s a challenge for resource-strapped stations to commit to web-original content, as “most stations don’t have a function for making web video inside the building.”

“We’re asking our stations to think hard: How can creating web content help your business?” he said.

An earlier solicitation for stations’ web-original videos for the PBS Digital Studios channel was met with some tepidity in 2012. Six stations indicated they had the capacity to produce online videos, but only two came through. Indiana Public Media delivered a children’s program, A Moment of Science, and Austin’s KLRU proposed BBQ with Franklin, an instructional barbecue series hosted by local barbecue legend Aaron Franklin.

KLRU had to raise money to initiate production of BBQ with Franklin, and PBS provided support for KLRU staff to launch a crowdfunding campaign on Indiegogo in October 2012. Seiken believes the campaign, which raised nearly $20,000 to exceed its initial $16,000 goal, was the first of its kind that PBS assisted with. Barbecue fans from all over the world — not just Austin — contributed to the campaign.

“It takes smarts and resources to do a successful crowdfunding campaign,” Seiken said. “So we do want stations to be taking the lead on this. But we feel like, as a digital entrepreneurs group, we can give them the tools to be successful at it.”

With proceeds from its Indiegogo campaign, KLRU produced a 10-episode, online-only season of BBQ with Franklin; episodes were uploaded to the program’s PBS Digital Studios YouTube page on an irregular schedule.

The series was tremendously successful with online audiences: Its episodes averaged tens of thousands of viewings and drew an international audience. Yet KLRU Creative Director Sara Robertson said the station has no plans to continue the production.

Robertson wonders how much of the credit for BBQ with Franklin will find its way back to KLRU. She questions the effectiveness of standard broadcasting practices, such as inserting the station logo in the lower corner of the screen, in helping online viewers make the connection between the show and the station that produced it. “I should have made it more obvious this was KLRU,” Robertson said.

The concept of web-original content that is also local-viewer-supported programming is difficult to convey, especially to viewers in distant cities and countries. Converting viewers into members is “what stations always deal with,” Robertson said, “and this is such a new area.

“How do you turn these web viewers who don’t live in your area into members of your station?” she asked.

It’s a challenge that PBS and stations will have to rise up and meet, Seiken said.

“The video world is changing at light speed. There are new competitors, new potential partners, radically new low-cost production models, free marketing and distribution models. So everything is changing at a blindingly fast rate,” he said. “Our view is that we either need to leverage that change to open up new opportunities for stations, or risk being left behind.”