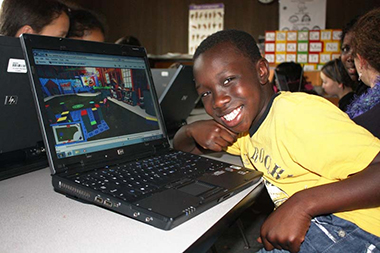 The Ready to Learn program backing educational media and outreach for children ages 2 to 8 is making digital learning through community engagement a priority, a change that will affect which public TV stations participate in the program and the outreach activities they mount in their communities.

LPB will focus its RTL efforts on the north side of Baton Rouge, a neighborhood with chronically high levels of poverty. Network employees and volunteers will work to train parents and teachers in using digital-media learning applications related to PBS Kids programming, according to LPB President Beth Courtney.

“This is not simply a promotional activity for a television show,” Courtney said. “This is actual learning taking place that can be measured, quantified and integrated into early childhood. That’s how we’ve shifted, I think, in public broadcasting. Before it was like, ‘Well, this is an interesting program, and it’s a nice babysitter.’”

Among the RTL grantees that have secured additional funding is PBS SoCal, the Huntington Beach station that is the new PBS flagship serving Los Angeles. It raised $175,000 from the Children and Families Commission of Orange County and the American Honda Foundation, more than double the amount of its $75,000 RTL grant. With the money, the station will develop a mobile digital-learning lab, as well as booklets, pamphlets and education workshops featuring a Science, Technology, Engineering and Math (STEM) curriculum.

Ready for the future

The sharpened focus on integrating digital learning technologies into preschool and early childhood education is only the latest change to Ready to Learn. The federal program was established through bipartisan support of legislation co-sponsored by Sens. Thad Cochran (R-Miss.) and Edward Kennedy (D-Mass.) and enacted in 1994, a time when strengthening early childhood education through PBS’s preschool programs garnered broad support among federal policy makers.

The Department of Education receives around $27.2 million in annual appropriations for Ready to Learn, and its approach for directing the funds to support early childhood education has evolved substantially over time.

Given budget pressures on the federal government, it’s possible that RTL could be revamped again. In his fiscal year 2014 budget proposal unveiled April 10, President Obama recommended consolidation of RTL with other Department of Education programs. The proposal was first floated in the White House’s draft budget for 2013.

When RTL first launched in the 1990s, outreach funds were widely distributed to local public TV stations to mount workshops and other events tied to TV programs such as Sesame Street and Between the Lions. Now CPB administers the program in partnership with PBS under a contract with the department’s Office of Innovation and Improvement (OII) and awards RTL grants to local stations on a competitive basis. Outreach is targeted to low-income communities, where children are most likely to enter school without mastering essential early-education skills.

CPB and PBS also compete with other media and education organizations to secure five-year grant renewals from the education department. For RTL’s last competitive request for proposals, in 2010, CPB and Chicago’s WTTW secured five-year federal grants, as did the Hispanic Information and Telecommunications Network, a Latino-controlled noncommercial satellite TV channel.

WTTW won a $32.5 million five-year commitment to launch UMIGO, a project using online games and digital apps to teach basic math skills to children in preschool and early elementary grades, with Wildbrain Entertainment, producers of Nickelodeon’s Yo Gabba Gabba! UMIGO began rolling out to 10 markets in October 2012; its outreach is organized around children’s museums and organizations in underserved communities, such as Boys & Girls Clubs.

Under its latest RTL grant, CPB secured $71.4 million for a five-year project emphasizing math skills, a shift from an earlier focus on childhood literacy that had been an RTL priority during the Bush administration.

“They are really interested in seeing how to push the envelope through technology, through innovative content, through innovative outreach methods,” said Pamela Johnson, RTL executive director at CPB, referring to the Department of Education’s OII. “They really don’t want to sit still every five years. They want to make sure that every five years we’re looking at Ready to Learn as a vehicle for using the most cutting-edge technology tools and approaches that we can, to do something different – maybe more effective, maybe more exciting – to close the achievement gap.”

Although announcement of the RTL outreach grants highlights the project’s new emphasis on digital-learning applications, Johnson and Deborah Sanchez, CPB’s top executive in charge of education and children’s content, emphasize that the majority of CPB’s RTL funding is invested in PBS Kids programming. CPB receives $12 million to $13 million annually to administer RTL and its grant programs.

Two new RTL-backed PBS Kids shows will launch within the next two years, for example, and each is being developed with curriculum-based digital games and learning materials.

“As we produce the episodes for the series, we are simultaneously creating interactive content for the Web and mobile in a way that is connected to the on-air content,” Sara DeWitt, v.p. of PBS Kids Digital, told Current. “For example, the interstitial segments in the show will encourage viewers to continue their Peg + Cat adventures online with related games and activities.”

The project, produced by the Fred Rogers Co., received $7.5 million in production support from RTL and was in development before the Department of Education’s 2010 decision to shift RTL’s focus to math.

Another new RTL-backed PBS Kids series, Odd Squad, will premiere next year. It is a live-action comedy about private investigators using math to solve mysteries.

KLRU’s Ben Kramer, a former elementary school principal who directs education at the Austin station, agrees with the priority that RTL places on the educational value of PBS children’s properties over promotion of individual programs.

“We are not in the business of trying to create zombies to screens,” Kramer said. “Our best work comes when we can work with families to give kids a dose of smart content and then ask those kids to begin to apply that content in the real world.”

The RTL grants announced this month are intended to build on the work of 11 stations that have served as  “demonstration sites” for digital learning since 2011.

Iowa Public Television received around $93,800 as an RTL demonstration site, and nearly a third of the funds went to organizations such as schools that needed to update their technology to accommodate new forms of digital learning, according to Trista Peitzman, pre-K–12 coordinator. The network focused its digital-learning program on two Iowa communities and plans to expand to a third in the near future.

“There were a lot of things we did with the past grant that really helped set us up to not only make it sustainable in those communities but also expand into new communities,” Peitzman said.

Two days after CPB announced its RTL grants, it also awarded $740,000 to Maryland Public Television to develop outreach models for “out-of-school learning.” MPT will create activities and programs around PBS digital-learning materials for use during extended breaks from school, such as summers.

PBS’s DeWitt said the approach developed by Maryland eventually will be tested in other markets nationwide.

Clarification: Ben Kramer, education director for Austin’s KLRU, has previously worked as a principal of various K-12 schools, including at elementary schools. An earlier version of this article described him as a former high school principal, but his role had been as an assistant high-school principal.
Questions, comments, tips? lapin@current.org
This article was first published in Current, April 15, 2013.
ShareTweet EmailPrint More